Jackie Phillips still isn’t sure whether a gas station will be built just up the road from her house in the Village of WestClay, but she wants to ensure a fueling center won’t be added near anyone’s Carmel home in the future.

Through the newly formed Carmel Healthy Neighborhood Alliance, Phillips is asking the City of Carmel to ban new gas stations within 500 feet of residences and schools, a distance she believes is enough to lessen the impact of chemicals such as benzene and carbon monoxide on those who live nearby.

“Hamilton County is developing rapidly right now, so I feel like there should be something that protects Carmel residents from the negative health implications of a gas station,” she said.

Hamilton and Marion counties have regulations banning gas stations within 300 feet of residences, but the City of Carmel only requires them to be 80 feet apart. City code overrides the county’s rule in this case.

City councilor Miles Nelson, who also lives in the Village of WestClay, said he would like to see Carmel’s regulations at least mirror the county’s, but he would support even tighter rules.

“Five-hundred feet, based on the information that I’m able to see, makes a lot of sense,” he said.

Nelson said the Carmel Plan Commission is expected to vote on an update to the zoning law that would prohibit future gas stations from being built within 500 feet of homes, assisted living facilities and schools. The matter is not expected to go before city council and would not apply to existing gas stations, including the one planned in the Village of WestClay. 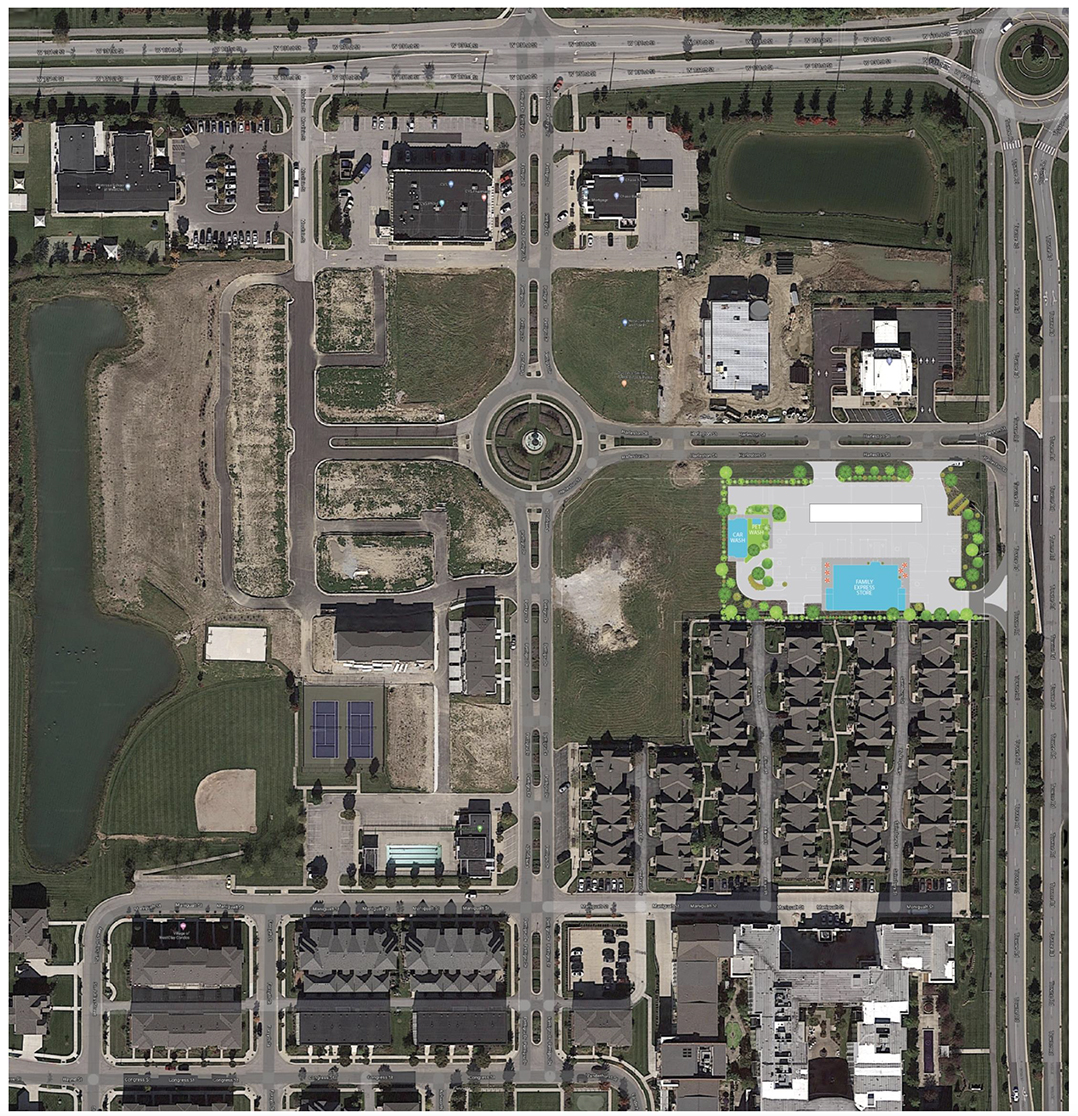 Brenwick Development proposed a 12-bay Family Express gas station and convenience store in 2020 on Harleston Street. The plan has been reconfigured to eight bays. (Submitted rendering)

Phillips, a professional photographer, had little knowledge of gas stations and their impacts on surrounding areas before she heard last year that Brenwick Development planned to open a Family Express convenience store and 12-bay fueling center on 1.5 acres on Harleston Street. She wasn’t comfortable with the idea of having a fueling center so near her home, so she began doing some research and was shocked to find a 2018 study by Columbia University scientists showed that levels of benzene — a carcinogen linked to leukemia and other health problems — present at gas stations are much higher than previously thought and can be measured 500 feet away. She also is concerned about the potential of increased crime.

So, Phillips and many of her neighbors started sharing their concerns with Carmel’s Board of Zoning Appeals, which was set to review several variance requests for the project. The matter was rescheduled several times, with Brenwick withdrawing the variance requests in September 2020.

Zoning for the site permits a gas station, so without variance requests, it could be built without going before the BZA. Brenwick officials declined to comment for this story or confirm whether plans for the gas station are moving forward, although more recent documents sent to city planners show the number of feuling bays reduced from 12 to eight.

Either way, Phillips formed the CHNA to bring the issue to the forefront and prevent other Carmel residents from having to fight the same battle.

“I don’t just want my neighborhood to be protected from this,” she said. “I don’t want this to go near any school, senior care facility or residential home.”

Jeff Lenard, vice president of strategic industry initiatives with the National Association of Convenience Stores, said it’s not unusual for gas stations to meet resistance when they’re proposed in an area without one, but that they often end up benefiting the neighborhood.

“You don’t want to build something nobody wants, because you’re not going to be successful,” Lenard said. “But oftentimes, you also see after a place faces opposition, once it’s built and once it goes from theory and some of the ‘what ifs’ to, ‘Wow, this is much different than I feared,’ everything changes. You may even see some of the folks who opposed it in the store. Every situation is different. It’s really important to listen but also tell your story about what you think about what you would add to the community.”

Lenard said he wasn’t aware of studies that recommend specific distances between gas stations and residential areas, but he said certain safety measures, such as vapor recovery systems, are much better than they used to be.

An eight-bay gas station has been proposed in the Village of WestClay, but some residents feel it is too near homes and a nearby senior living facility. (Photo Illustration)

Focusing on the positive

CHNA has enlisted the help of Community & Environmental Defense Services to develop a strategy regarding the planned WestClay gas station and others proposed in the future. The Maryland-based firm provides guidance regarding a wide range of development proposals with environmental impacts.

CEDS founder Richard Klein said he used to follow the more traditional route of hiring an attorney to try and block a project, but that only worked about 5 percent of the time and led to expensive fees every time.

So, for the last 15 years, CEDS has taken a different approach.

“All of our energy goes into trying to figure out ways a property owner could make use of their land how they want to, and instead design negative impacts out of the project,” Klein said. “We’re pretty successful in being able to do that in most cases.”

Klein said there’s little that can be done to mitigate the public health risks of chemicals associated with gas stations outside of changing state law, so he’s primarily working with CHNA to encourage city leaders to update local laws to prevent gas stations from opening near residential areas in the future.

CEDS research showed that approximately two-thirds of Carmel’s existing gas stations are already more than 500 feet away from the nearest home, and he hopes the information will convince city leaders that placing gas stations away from homes doesn’t stifle development.