You are at:Home»Current in Carmel»Carmel Community»Carmel father’s heart attack may have saved young son’s life

Joseph Szydlowski’s heart attack in 2018 may have saved his young son’s life.

There’s a good chance it saved his own life, too.

While in the hospital recovering, the Carmel resident, then 42, was found to be severely anemic and diagnosed with hereditary hemorrhagic telangiectasia, a condition that leads to blood vessel malformations. In some cases, the vessels can rupture and bleed, which can be fatal.

Because HHT is inherited, Joseph and his wife, Susan, decided to have their three children tested for it, as the couple had a 50 percent chance of passing it to each child. Tests showed that their two youngest children, Eve, 18, and Case, 8, have it, although neither had shown symptoms.

“As much as I didn’t want this to be, I am so grateful that I do know and that something tragic didn’t happen and we learned after the fact,” Susan said. 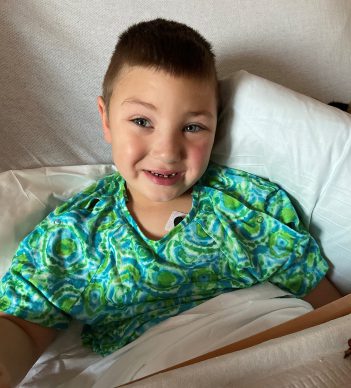 Case Szydlowski had surgery at Riley Hospital for Children in 2019 to prevent a malformed blood vessel from causing problems in his lungs. (Submitted photo)

After being diagnosed, Eve and Case had lung and brain scans to check for problematic blood vessel malformations. Doctors found one large enough to be worrisome in Case’s lung, so the family opted for surgery in late 2019 to prevent potentially life-threatening complications.

Susan said it was tough to watch her seemingly healthy youngest child go through the rigors of surgery, but the family felt confident they made the right decision.

“He was being made to feel like he was sick when he wasn’t,” Susan said.

HHT is rare, but pediatric hematologist Manjusha Kumar said it is likely highly underdiagnosed. The most common symptom is frequent nosebleeds, an occurrence many people don’t consider to be worrisome that can often be caused by less severe problems.

“The tricky part is you could be a silent ticking bomb anytime a brain could bleed, but if you had suspected (HHT) based on, ‘Hey, my dad (had nosebleeds), or ‘My grandmother had these symptoms’ and you connect the dots, you could get diagnosed before you have a problem,” said Kumar, a Carmel resident who works at the Indiana Hemophilia and Thrombosis Center. 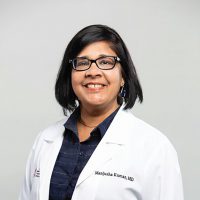 Susan said her husband, a union carpenter, had almost daily nosebleeds, as did some of his relatives, but they had never heard of HHT before Joseph’s heart attack.

The HHT diagnosis has been lifechanging for the Szydlowski family. Case, a Cherry Tree Elementary student, and Eve, a Carmel High School graduate and nursing student at Ivy Tech, will have regular scans and bloodwork for the rest of their lives. Joseph receives regular treatment for internal bleeding in an attempt to prevent another heart attack or stroke.

Although Susan doesn’t have HHT, she’s become a regular blood donor because she’s seen how important blood transfusions have been for her family.

“That’s something small that I can do or anyone else who is in a healthy situation (can do),” she said. “Whether for HHT or many other reasons, people need to receive blood.”