You are at:Home»Current in Fishers»Fishers Community»Fishers caddie earns Evans Scholarship 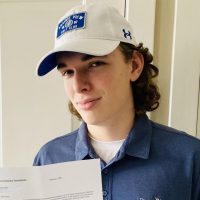 Kaiden Miller knew how beneficial an Evans Scholarship could be since he began caddying in the seventh grade.

“My mother, Rachel Miller, grew up in Waterville (Ohio) and her friend, Matthew Rhoades, also known as Rodeo, he suggested I try it out,” the Fishers resident said. “I was aware of the Evans Scholars from the start. Matt Rhoades wasn’t an Evans Scholar but his sister was. So, getting the scholarship was a goal of mine from the start.”

Miller’s dedication was rewarded as the Cathedral High School senior recently found out he was one of 16 Indiana student caddies to earn the Western Golf Association’s Chick Evans Scholarship, a full, four-year housing and tuition scholarship at either Indiana University or Purdue University. The scholarship is valued at an estimated $120,000 over four years. Miller plans to major in mechanical engineering at Purdue.

“This is a massive load off me and my mother’s shoulders,” said Miller, who caddies at Prairie View Golf Club in Carmel. “The last four years I’ve taken nearly all my money from caddying and put in toward my high school tuition.”

“They want you to succeed in college, so they want to know what you are doing or want to succeed yourself,” said Miller, who had a 3.6 grade point average last semester. “I spend most of my time outside of school, summer, spring and fall working either cart staff or caddying at the course.”

Miller said on school breaks and summers, he either works as golf cart staff at the course or caddies.

The main expense Miller will have is food at the Evans Scholars house.

“You either pay for the food plan which will pay for all your meals, or you work, which is what a lot of them do, waiting tables,” he said. “The first year I might pay for the meals, then probably work around campus for it after that.”