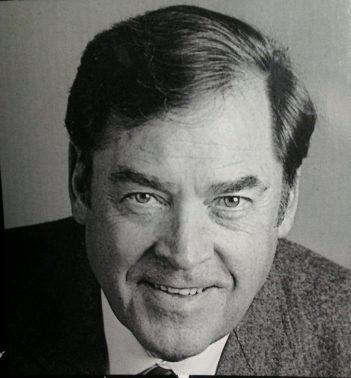 Robert was born in Duluth, Minnesota, on April 28, 1923. His parents were Maude Lausen and Alan Grant Montgomery; and his siblings were Aileen, Margaret (Peg), Francis (Bud), and Donald. It was his Sunday school teacher Helen Weygant who became his lifelong mentor and instilled in him the love of language and literature.

In 1941, at the age of 18, Robert joined the army, serving with the Rangers in northern Africa and Italy, including the famous battle at Monte Casino.

With crippling injuries, he was sent to Percy Jones Hospital in Battle Creek, Michigan. While recuperating, he decided life was so precious that while most people live by accident, he would live his life on purpose. Here he gave radio broadcasts interviewing celebrities like Bob Hope, who visited the hospital.

Back in Duluth in 1946, Robert earned his GED and then studied speech and music at Duluth State Teachers College, now the University of Minnesota Duluth. He hosted a classical radio program “Music for Better Listening” at the university, where his original comedic play “Grammatical Amour” was a smashing success.

Robert then earned his master’s degree in sociology and mass communications at the University of Wisconsin-Madison. In 1949, he married Zonda Miller of Duluth (They had three daughters.) Joining the speech faculty at the University of Oregon-Eugene, Robert created staging in-the-round for Shakespeare’s “Macbeth.” The production also featured an early form of surround-sound in his “Sound Theater.”

In 1951, in Richmond, Virginia, Robert worked in sales and production in the early days of television.

His next position was on the faculty of the speech and radio department at Butler University in Indianapolis, where he grew WAJC-FM from 700 watts to 50,000 watts–making it a major classical station in the city.

During the 1960s and 70s, he was active in politics, leading campaigns for Governors Branigin and Whitcomb, and for Senator Hartke. He also campaigned for Vice President Hubert Humphrey and for John F. Kennedy. In 1960, Robert went to Washington to interview for the Under Secretary of Agriculture in the Kennedy Administration.

In 1965, he went to work with Ruben Advertising, later Ruben Montgomery, which won the accounts of Indianapolis Power & Light, American Fletcher Bank (Bank One), and Coca Cola’s regional bottler. Then, as MZD with Robert as Chairman and CEO, the agency was the largest in the state for fifteen years.

Robert named the Fourwinds Lakeside Inn & Marina and The Pointe real estate development, both of Bloomington. He also named Keystone at the Crossing in Indianapolis, all in the early 1970s.

In 1974, he sued the federal government as a stand against President Nixon abandoning the gold standard in 1971, such that paper money was no longer backed by precious metals.

In 1975, he helped found the Indianapolis Opera and sat on its Board of Directors.

Robert was also involved in the 1985 discovery and aftermath of the treasure cargo of the lost Spanish galleon “Atocha,” which sank during a hurricane in 1622. Artifacts from the world’s most valuable shipwreck were first exhibited at The Children’s Museum of Indianapolis.

Robert was very active in Toastmasters, Rotary Club, radio broadcasting, and the Kiwanis Club, which awarded him “Man of the Year.” He received several honorary doctor’s degrees including from the University of Indianapolis and from Indiana Wesleyan University.

Author of many motivational and business books, Robert wrote titles such as “Get High on Yourself: Get On to Life” (1977), “Making Time Your Money Machine” (1990), “The Future Machine: Process for Projecting Your Company’s Future” (1993), “The Secret to Finding and Selling Ideas” (1997), and “Be Strategic or Die: The Art of Altering Probabilities into Possibilities” (1998).

Robert enjoyed the years with his beloved wife Dolores of Indianapolis since they married in 1985. They always liked spending time with their special dogs Angel and Jackson (Putzy). He did remain lifelong friends with Zonda.

His interests included meeting and talking with people, auctions, golf, hunting for golfballs and coins, mining, rocks and gems, music, education, public speaking, teaching, philosophy, reading, and writing and learning every day of his life. He was a constant achiever and a lover of life.

“The three most important questions you will ever have to face: Why me? Why here? Why now?”

“It would have been different if God had worked on the seventh day. You would not have been necessary. Isn’t it great to know that He had enough faith in you to leave this earth, this universe in your hands and that He trusted you with His spirit?”

“The question is—do you have the courage to try?”

Dolores would like to thank the medical personnel and caregivers of the Indianapolis Veteran Affairs Medical Center and of the Seasons Hospice & Palliative Care. In lieu of flowers, contributions are welcome for Seasons Hospice at 2629 Waterfront Parkway East Drive, Suite 375, Indianapolis, IN 46214.