You are at:Home»Current in Zionsville»Zionsville Cover Stories»Diversity and Inclusion?: Residents debate whether local artwork should have been allowed

Artwork on a traffic control box at one of Zionsville’s entryways has upset some town residents who consider the piece divisive.

The Town of Zionsville allowed four Zionsville Community Schools students to each paint one side of a traffic control box at the corner of Sycamore and Main streets last year for an art project.

The art project was done in coordination with the Zionsville Cultural District, a nonprofit that assists with public art projects throughout town. Eighth-grade Zionsville Middle School student Phoebe Sidebottom initiated the “All in This Together for Social Justice” project by approaching the town with a request to use the traffic control box for the contest. The town did not participate in judging the artwork, and the ZCD was asked to help coordinate the project by assisting with judging and providing technical and artistic assistance to those selected to display their artwork, according Amanda Vela, the town’s public information officer. A panel of six judges selected the winners.

One of the student artists, Grace Lizama, painted a clenched fist held by figures painted in different colors on the side of the traffic control box she painted on, the side most prominently facing motorists. Some Zionsville residents have voiced their disapproval of the painting, saying it is not the best image to welcome people at one of the town’s entryways and that the town should have consulted a focus group to determine an appropriate image.

During her 2021 State of the Town address, Zionsville Mayor Styron answered a question submitted from a resident concerned by the painting.

“This has certainly been a much-discussed topic,” Styron said during the address. “And there have been times when I wondered, ‘Did we need to have this artwork contribute to such a charged discussion?’ Because there have been a number of people who have expressed (concern with the painting). Where I have leaned into is there are young people in our community who have a voice, and they want to share it in the community, and they’d like to echo their thoughts and feelings as they relate to current-day conversations that adults are having.”

Tom Santelli, president of the Board of Boone County Commissioners and a Zionsville resident, said several of his constituents have contacted him, saying they are concerned by the painting. He said some have questioned whether the artwork truly depicts diversity and inclusion because the fist is white.

“We get all kinds of feedback,” Santelli said. “Is that a (Black Lives Matter) fist? Is that a White Power fist? I’ve had people text me that were bringing in guests from out of town, and they saw the fist there. They turned around and went to Carmel because they just don’t want to deal with that. Having that statement there takes a lot of explanation. And even then, people are going to be divided about having a fist as a gateway entry.

“I’ve not seen that anywhere (else), and I’ve gotten a lot of negative feedback.”

During her address, Styron supported the town’s decision to allow the students to express themselves through their artwork.

“I listened to young Zionsville residents who felt very strongly that they had a message to share through their art and that for them, the message they were sharing was for those who don’t have as loud (of) a voice – particularly in our suburban areas,” Styron said. “I think that while some people have found this to be frustrating and have not wanted to see a clenched fist on a traffic control box as they drive into the entryway, I can appreciate their frustration on that and their sentiments. But I also want to let the young people who had the opportunity, and the invitation, really, to produce art for that particular traffic control box, to let their art stand for a period of time while we figure out what we are going to do with that entryway.”

Town officials are in the beginning stages of formulating development plans for the entryway. A timetable hasn’t been set for when construction on the area will begin, so the traffic control box will remain as is for an indefinite amount of time.

Styron said she didn’t believe the artwork is curtailing business and that many have contacted her to share the support for its message. 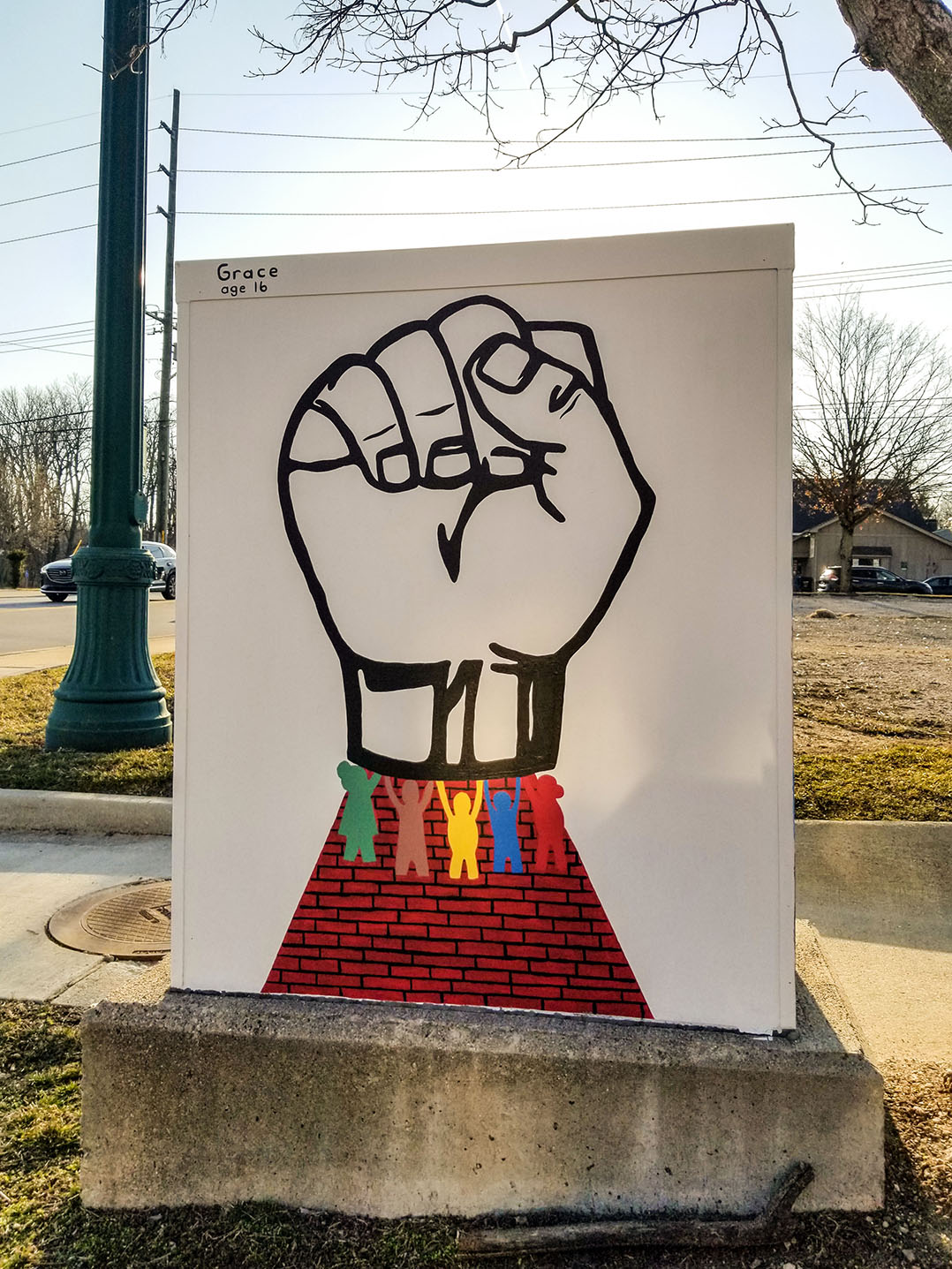 This painting on a traffic control box at the corner of Sycamore and Main Streets in Zionsville have upset some residents. (Photo by Jarred Meeks)

“I liked it a lot,” Garisek said. “I felt it was strong and showed a true piece of Zionsville. In my opinion, I don’t see White Power because of all the people below it. It’s equality.”

Tom Plummer, 62, of Avon, said the artwork shows Zionsville “is not living in the past.”

“I think it is probably a good thing,” Plummer said. “You’re showing that the community is willing to change – not that it was racist to start with, but we are thinking ahead. I say we, as a people. We have to change some of our attitudes.”

Plummer, however, said the town might have benefited from consulting a focus group to determine what artwork should have been displayed on the traffic control box.

“I like the idea that the students can think for themselves, but I think since it is part of the community, maybe they should have put group-thought into it because there may have been something better to put there,” Plummer said. “Since it is something everyone sees coming and going, maybe there should have been some more thought put into it.”