You are at:Home»Current in Fishers»Fishers Cover Stories»Miles ahead: All-American taekwondo competitor earns top honors in classroom

While Nolan Miles still has aspirations of making the U.S. Taekwondo National Team en route to the 2024 Olympics, he also has ambitions to be a physician.

The Fishers High School junior, a two-time All-American in taekwondo, was selected as a delegate to the Congress of Future Medical Leaders, which was scheduled to be held virtually March 20-21. He plans to attend additional sessions in June and October, which could be held in person.

“I’m looking to get some experience,” he said. “I have a pretty strong belief that I want to be a doctor, but I think this will solidify my decision and make sure 100 percent it’s what I want to pursue.”

The Congress is an honors-only program designed to honor, inspire, motivate and direct top students nationally. Miles’ nomination was signed by Dr. Mario Capecchi, winner of the Nobel Prize in Medicine and the science director of the National Academy of Future Physicians and Medical Scientists.

“I think it will be a great thing to set me apart from the typical applicants applying to college and medical schools,” Miles said. “I’m looking forward to all the different speakers we are going to have. It sounds like there is going to be a ton of different doctors and surgeons that I’ll get to learn from.”

Harvard and Notre Dame are two schools he wants to attend. His parents, Ryan and Crystal Miles, are proud of his dedication.

“We have seen what everyone else doesn’t see, the sacrifices, the losses, the frustration and mistakes,” Crystal said. “Nolan has proven to have high mental toughness and focus. We created the foundation for success for him and he made the choice to run with it.”

Miles applied and took an online class through Notre Dame Global Scholars in the fall of 2020. The international gateway professors teach from South Africa, Rome and London. Miles was admitted into the school of architecture and took a class from Rome.

“It was a Roman history architecture class,” Miles said. “The professor gave (virtual) tours of the Colosseum and Rome at night.”

“I didn’t know (what I wanted to study) until probably this school year when I took AP Biology and AP Physics and have absolutely loved both of them,” he said. “I am thinking of taking an orthodox route of majoring in physics and trying also the prerequisites to take the (Medical College Admission Test). That’s something to set me apart from other people.”

Miles was accepted into a National Youth Leadership Foundation for medicine and will attend a weeklong session June 12-20 at Washington University in St. Louis.

“He will learn how to suture, be trained in emergency situations like active shooters and bombings as well as work with surgical equipment and emergency medicine,” Crystal Miles said. “He will be in class with current med students and be able to talk to them about what it’s like to be in medical school.”

Prior to the pandemic, Miles was busy either competing in tournaments or training with his taekwondo team near Washington, D.C. Miles was in Costa Rica to compete when the event was halted before competition in March 2020.

“That has pretty much come to a stop,” he said. “I’ve been waiting on USA Taekwondo to invite me out to train with the Olympic team or start hosting tournaments again. I’ve been staying healthy and fit. I’ve definitely been focusing on my school work. But I don’t want to lose my dream of getting to the Olympics. I still think it’s a possibility. They could invite me there, like what they see and ask me to come live there.”

In November 2019, Nolan was selected to attend Team USA’s Athlete Academy at the Olympic Training Center in Colorado Springs, Colo., but training has been shut down because of the pandemic. He was one of two selected in his division of -68kg, or less than 149.9 pounds.

With time on his hands, Miles tried out and made the FHS track and field team and is competing in the 400 meters. He also plans to participate in the 800 meters and pole vault.

Miles’ younger brother, Holden, a seventh-grader at Hamilton Southeastern Intermediate Junior High, is a top taekwondo national competitor and top student. Holden, 13, won the national title in the -40kg class, or less than 88.18 pounds, in the age 10-12 division in Florida in July 2019. 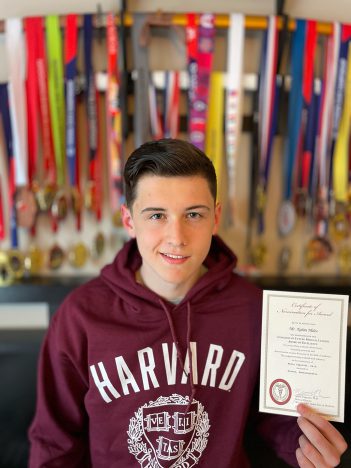 Favorite TV show: “Cobra Kai” on Netflix. “When that came out, it was awesome to see a martial arts show becoming popular,” Miles said.

Favorite music: “I listen to a lot of rap, so I’d say Logic is probably my favorite.”