Moonshot Games owner Jayson Manship enjoyed so much success with a pop-up toy store concept in downtown Noblesville that he decided to make the store permanent. 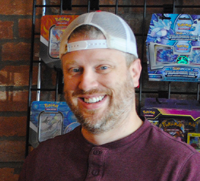 The pop-up toy store operated from October through December 2020 in the former KeyBank building at the northeast corner of Ninth and Logan Streets. Moonshot Games’ flagship store is at 50 N. Ninth St.

“We weren’t sure toys in downtown Noblesville was a viable thing, and so we wanted to test it and decided to open a pop-up shop,” Manship said. “It was temporary because the owner was planning on turning the space into a restaurant. It went very, very well, so we challenged the community and said, ‘Hey, you bought a lot of stuff over the holidays, but is this something you want permanently?’”

The toy store’s Facebook page gained 2,500 followers within 30 days. Manship said he received a response from the community that showed Noblesville residents wanted a toy shop. So, Moonshot Toys opened March 1 in the building that used to house a clock shop at the corner of 10th and Conner streets.

“It has been just awesome,” Manship said. “The community has come out in full force and people are so excited because in the permanent location, we can do things you can’t do in a temporary location.”

“The toy store is exceeding our expectations for sure,” Manship said.

The store also sells candy with a 4-foot by 8-foot Jelly Belly wall.

“People are just loving that,” Manship said. “We also started carrying plush stuffed animals. We have never done that before, but now we carry a product called Wild Republic, which is the same stuff at the Indianapolis Children’s Museum or the (Indianapolis) zoo.”

In a few weeks, Moonshot Games will open a third location on the square in downtown Noblesville. Manship hasn’t disclosed details on what that store will offer, but he said it will be called Moonshot Labs. It is slated to open March 29.