You are at:Home»Current in Carmel»Carmel Community»Carmel student-athlete on road to recovery after suffering brain injury

Correction: An earlier version of this story incorrectly stated the specific type of brain injury suffered by the student. It was an intraparenchymal hemorrhage. 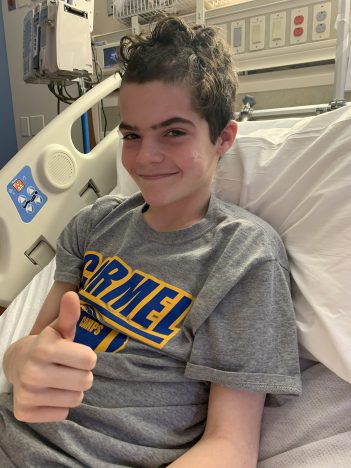 Garrett Auch is recovering from an intraparenchymal hemorrhage at Riley Hospital for Children. (Submitted photo)

A Clay Middle School student-athlete is hoping to return to his Carmel home next week after spending more than a month at Riley Hospital for Children recovering from an intraparenchymal hemorrhage, which, like an aneurysm, caused a sudden leakage of blood into the brain.

Garrett Auch, 14, was rushed to the hospital Feb. 10 after complaining of a headache at baseball practice that quickly developed into something much worse. Since then, he’s spent time in a coma, undergone multiple brain surgeries and surprised everyone by his quick recovery. 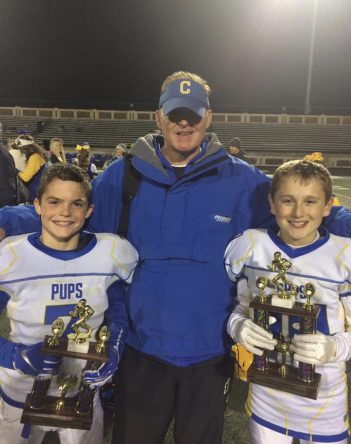 “He’s made an unbelievable amount of progress. Every day, he’s more and more of himself,” said Andy Auch, Garrett’s father.

That’s been a huge relief for the Auch family, as initially it wasn’t clear how long Garrett would be in the hospital or how long the recovery process might take.

Andy will never forget the back-to-back phone calls from Garrett’s coach to let him know that something was wrong. He said Garrett had been practicing in the infield when he suddenly developed a headache. Garrett had not been struck by a baseball or anything else when the pain began.

Soon, Garrett began feeling nauseous and cold, and that’s when they realized the problem was more severe than a common headache. An ambulance rushed him to IU Health North Hospital, where doctors discovered bleeding in his brain and ordered him to be flown by helicopter to Riley Hospital.

At Riley doctors placed Garrett into a medically induced coma, put him on a ventilator and performed intricate surgeries.

Seeing Garrett immobile in a hospital bed was difficult for many of his friends and teammates, as he has been involved in a variety of team sports from a young age. Charlotte Bischoff said her son, Brady, is close friends with Garrett and has enjoyed being his teammate for years. 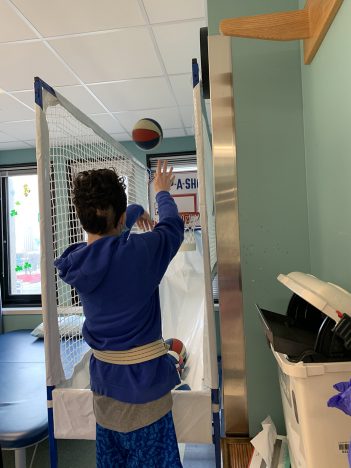 Garrett Auch is recovering from an intraparenchymal hemorrhage at Riley Hospital for Children. (Submitted photo)

“(Garrett) is the nicest kid in the world,” Bischoff said. “Not only is he a fabulous player, but he is so attuned with the other kids. If something happens wrong, he’s the first to come over. We’re talking sportsmanship like I’ve never seen.”

It’s still unclear if Garrett will be able to return to team sports because doctors are still trying to determine what caused the hemorrhage. Either way, Andy, who coached many of Garrett’s teams, said he expects his son to thrive.

“We’re not making any plans, really. We want him to get better and have as normal life as possible,” Andy said. “If he can go back to doing (sports), that’s great. If not, that’s great, too, because he’s a really good kid. He’s got a lot of avenues in his life that will be successful for him.”

Bischoff has launched a GoFundMe campaign to assist the Auch family with medical expenses. As of March 18, it had raised more than $20,000.

Andy said the family, which includes his wife, Dawn, and Garrett’s twin brother, Nate, has been amazed by the many ways the community has supported them during this time.

“Everything that the Carmel community has shown us has been just what Carmel was always advertised to us when we moved here in 2012. It’s all coming true before our eyes,” Andy said. “It’s unbelievable. What people have done for us, it’s almost impossible to put into words.”

Visit the GoFundMe page at gofundme.com/f/garrett-auch.