You are at:Home»Current in Carmel»Carmel Community»City council approves $38M for police HQ expansion, IT relocation

The Carmel City Council met March 15 to vote on funding a Carmel Police Dept. headquarters expansion, introduce rezoning for a new neighborhood on the city’s northwest side and hear an overview of tourism in the county in 2020.

The Carmel City Council is approved $38 million in bonds to cover the cost of expanding the police headquarters building. (Rendering courtesy of Studio M Architecture & Planning)

What happened: The council approved issuing a $38 million lease bond to finance an expansion of the Carmel Police Dept. headquarters and relocation of the IT department.

What it means: The expansion will include relocating city court to the building at 3 Civic Square and many other upgrades. The IT department will be consolidated from the existing police station and a building in the Arts & Design District to Clay Township’s John W. Hensel Government Center on College Avenue.

What’s next: The council’s finance committee is still discussing a project to expand parking to accommodate the completed project. The committee will likely discuss the matter on April 1. 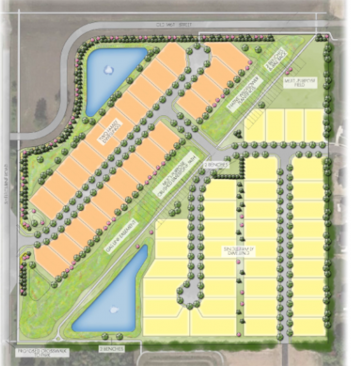 The 37 acres on the southeast corner of 146th Street and Shelborne Road is for the 82-home Albany Village project. (Submitted rendering)

What happened: The council sent to its land use committee a proposal to rezone a 37-acre site in northwest Carmel to a planned unit development to make way for a new neighborhood.

What it means: Albany Village is planned to have a total of 82 single-family dwellings and duplexes on the southeast corner of 146th Street and Shelborne Road. Several residents who live nearby expressed concerns during the public hearing about limited access points to Albany Village and that it doesn’t properly transition from adjacent neighborhoods.

What’s next: The land use committee will discuss the project, but a meeting date has not been announced.

What happened: Hamilton County Tourism President Brenda Myers presented an overview of tourism in the county in 2020.

What it means: The COVID-19 pandemic led to a sharp decrease in tourism, with hotel occupancy down 42 percent from 2019. She said that Grand Park in Westfield “saved” the tourism industry in the county, as it brought a significant number of visitors to the area and boosted hotel occupancy rates when it began hosting events again.

What’s next: Myers said several indicators point to local tourism improving in 2021 and that the county is positioned well for a full post-pandemic rebound.