Lynette Gross has been fascinated with antique dolls for as long as she can remember.

“When I watched ‘Heidi’ with Shirley Temple for the first time and the mean nanny drops the antique doll and breaks the head, that was the tragedy for me, not when she was taken away from her grandfather,” Gross said. “I still remember that from when I was about 4.”

But her passion for collecting didn’t start until she married more than 42 years ago. Her husband, Don, enjoys antiques as well. He collects antique clocks.

Gross, a retired Carmel Clay Schools librarian and teacher at different schools, has several antique dolls at both her Carmel and Madison homes. Since retiring five years ago, she has attended more shows and concentrated on her shop, selling them on Ruby Lane.

“It’s a full-time job. I have to take pictures and write the descriptions,” Gross said. “It’s a business.”

It’s a passion as well.

“One of the things I really like about antique dolls is the historical and sociological factor involved,” Gross said. “They are really interesting because of that, and you have to do studying to learn about them. I’ve been doing it for 40-plus years now.”

Gross said many of the dolls were made by hand and sold. In the late 1800s, Emma Adams and her sister, Marietta, from Oswego, N.Y., helped save a family farm by making and selling Columbian Dolls, which are cloth dolls with hand-painted faces. They were called Columbian Dolls because they were part of the Chicago Columbian World Exposition of 1893.

“(In) a couple of years, they sold two or three thousand, which was a huge amount back then,” Gross said.

Cloth dolls are a favorite of Gross. Wooden dolls were primarily made in the 1600s in England, she said.

Gross said she has made a few visits to exhibits and doll shows in Germany.

“Germany was one of the first places to make toys and dolls,” she said. “(Germans) got into making dolls with china heads. France got into the doll making, too, and the two (nations) started competing against each other in the 1800s.”

Trends changed in the early 1900s.

“Instead of making beautiful dolls that made children look like adults, they would have dolls that look like real children,” she said. “Some were very popular dolls, and some were not. I like the character dolls, which are a little different than pretty dolls. Kids didn’t like them. Some had grinning faces and the kids were scared of them. They wanted pretty dolls. (Character dolls) are valuable because not many were produced. When they didn’t sell, German and French dealmakers would just break them. They weren’t worth sending to the United States to sell.” 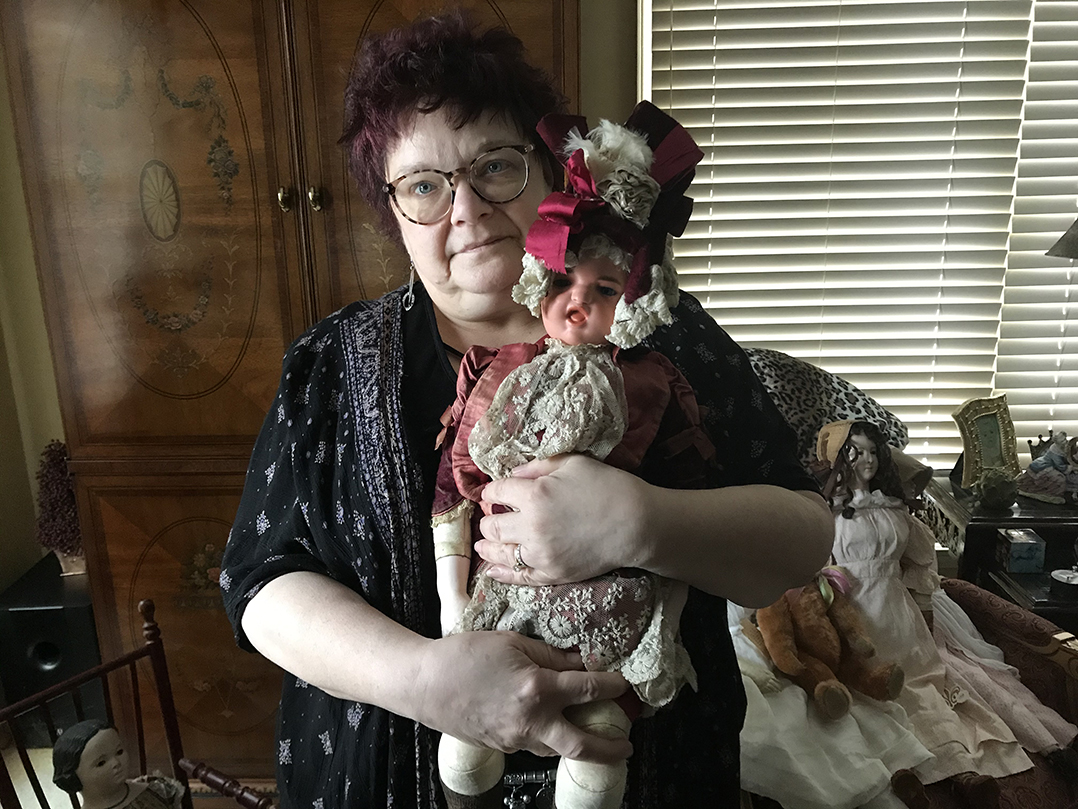 Lynette Gross holds one of the dolls in her collection. (Photo by Mark Ambrogi)

Doll collector Lynette Gross said she fields many calls from buyers about what dolls are worth or determining their origin. There are several books and price guides to help, she said.

“The Midwest is not the place to find the dolls, because people threw them off the covered wagons (traveling west). They didn’t care,” Gross said. “The East Coast is where I find them. The Doll Collectors of America meet in Maine or New Hampshire once a year.”

Gross said many of the doll collectors, surprisingly, are men who enjoy the historical aspect of collecting.

Her shop includes a bit of everything.

She has some dolls, made in Japan, that were called doctors’ dolls.

“In the 1800s, (Asian) women weren’t allowed, if they went to the doctor, to disrobe, so the doctor would have these dolls where the woman could point to where she was having a problem,” Gross said.

Gross started out selling dolls from the 1940s that were more affordable. Eventually, she afford older antique dolls.

“I’m always buying. I buy collections and from individual people,” said Gross, who served a term as president of the United Federation of Doll Clubs. “I buy from auctions online. I ship all over the world.”

“Lynette’s love of dolls and subsequent Ruby Lane online shop has allowed us to do more traveling and to meet some very interesting, intelligent and avid collectors,” he said. 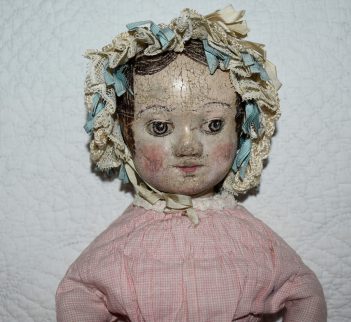 What: Izannah Walker doll handmade in the U.S. east coast

Date made: Circa the second half of the 19th century

What makes it unique: Handmade by a woman competing in a man’s world. Each is individually painted. Very difficult to find in the Midwest. 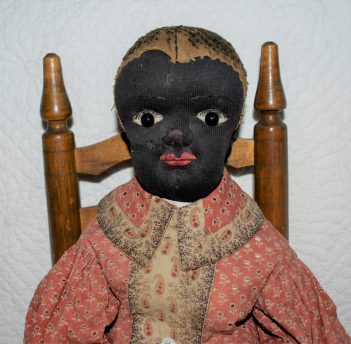 What: Cloth Black Beecher Baby, handmade in the U.S.

Date made: Circa the second half of the 19th century

What makes it unique: Benefit doll made by Julia Beecher, a relative of Harriet Beecher Stowe, needlescupted, shoe button eyes. Funds received from the sale benefited  both foreign and home missions. 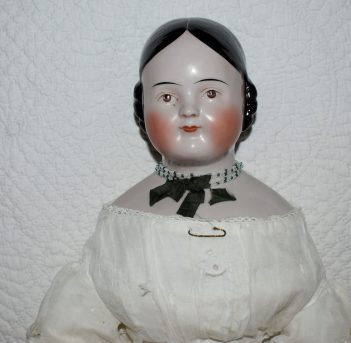 What makes it unique: These dolls are usually dated by the hairstyle as they are not marked in any way 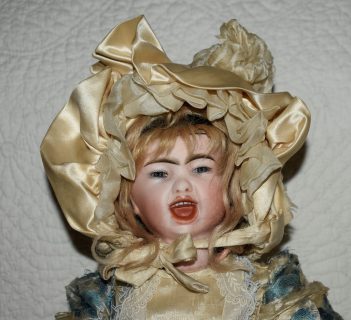 What: Bisque head doll by Jumeau and manufactured in Paris