You are at:Home»Current in Carmel»Carmel Community»State title win even more sweet for Carmel boys basketball team after the cancellation of last year’s tournament 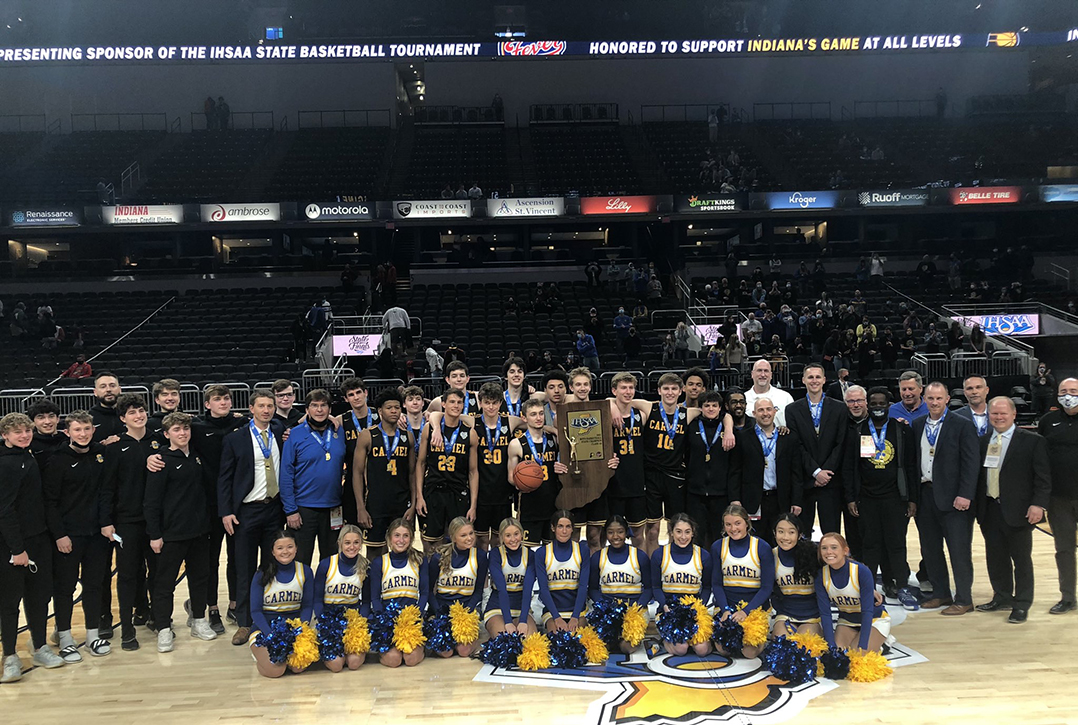 As Carmel High School sophomores, Brian Waddell and Connor Gioia watched from the bench during the Greyhounds’ Class 4A state championship victory.

“Being on that 2019 team was being around a winning atmosphere all the time,” Waddell said. “They knew how to win, and they knew how to play the right way. Sitting on the bench at Bankers Life (Fieldhouse) in 2019, you are thinking, ‘I want to be here on the court when I’m helping out.’ We were able to do that this year and pull it out.”

Waddell scored 20 points and grabbed 10 rebounds as the Class 4A No. 2 Greyhounds topped No. 3 Lawrence North 51-46 in overtime April 3 to win the 4A state basketball title at Bankers Life Fieldhouse in Indianapolis.

“I feel like that group of seniors really helped us in our growth,” Gioia said of the 2019 team. “We got beat up pretty good at the start (of the 2019-20 season) but felt we were good in March and that got taken away (because of the COVID-19 pandemic). That gave us a little extra motivation. To start and be part of it starting and playing the whole game with Brian is a great feeling to come out on top.”

Gioia, who earned the Class 4A Mental Attitude Award, scored nine points in the championship game. Gioia scored 16 in a 53-50 overtime victory against Gary West in the semistate.

“I just had the opportunity to make some big-time plays and hit shots,” Gioia said. “I was able to step up. It’s a credit to these (teammates). They were making drives, and I just had to move without the ball, and they were able to find me. These guys trust me with the ball in my hand at the end of one game.”

The Greyhounds lost to Warren Central in the Class 4A state final in 2018. After capturing the 2019 title, Carmel was 18-7 in 2020, winning the sectional before the postseason was canceled.

Carmel coach Ryan Osborn was an assistant for six years before being hired as coach for the 2017-18 season. He has watched the players develop since they were in third grade.

“They are going to remember this for the rest of their lives, especially with everything they have been through the past two years,” Osborn said.

Carmel finished 26-2, with one-point losses to Cathedral and Fishers.

“They never wavered,” Osborn said. “The growth we’ve seen out of this group is amazing. Through every challenge, through tough games, they always rise to the occasion.”

“He’s shooting over 80 percent for the year,” Osborn said. “It’s a mental toughness thing. You can credit his defense in the same manner. He defends. Mentally, he’s just kind of locked in. He wanted to be on the free throw line down the stretch, and he made some big ones.”

“We could tell they had a bad taste in their mouth from the first time we played,” Gioia said. “That extra energy made their press even more difficult to break. It was one of their best weapons.”

In addition to Whack, junior starters Peter Suder and Charlie Williams will return to make another run.