You are at:Home»Current in Westfield»Westfield Cover Stories»Citywide concern: Mayor warns of repercussions if city breaks agreement with INDOT to widen Ind. 32

Westfield Mayor Andy Cook is not only worried about the consequences of widening Ind. 32 from Westfield Boulevard to East Street, but he also is concerned about repercussions if the project doesn’t happen.

Recently, some Westfield City Council members have voiced concern about the cost of the project to widen Ind. 32 to four lanes, a price that won’t be fully known until bids are accepted. The council, which has five different members from when the then-estimated $15 million project was approved in 2018, is set to reconsider an interlocal agreement between the city and INDOT outlining terms of the project at its April 12 meeting.

Council President Mike Johns said his main concerns are the financial aspect and creating a walkable city. The main concern behind the financial aspect is the council is worried that, like Grand Junction, unforeseen costs will arise and cause the project to go over budget or allow it to be completed under budget, but without critical items that were originally planned, as happened with Grand Junction.

“The interlocal agreement was agreed on two and a half years ago now, and expenses have gone up and we’ve seen what’s happened with some of the other city projects that have gone considerably over budget,” Johns said. “I wanted to find out exactly where we’re at, and the city came back and said only a million over budget, which is good, but they don’t take into account the associative projects. Within the interlocal agreement, it said the city wants to expand Jersey Street, which I am 100 percent supportive of, but that’s a $2 million cost, and (the interlocal agreement) also says we are going to need to have a (pedestrian) bridge, but now the administration is saying we don’t mean that anymore. A bridge, or a tunnel, would be $7 million. The interlocal agreement specifically said there was an intent to do it, but (the city) doesn’t want to acknowledge it now or allocate the money for it. So, that’s always been one of my key issues in a lot of projects that get approved.

“They’re only approved in part, and then six months later the administration comes back and says, ‘We need this, or we need that.’”

Johns also stressed that by building Ind. 32 as proposed, the city will be split between the north and the south.

“What you’re going to do is, you won’t have a city center anymore,” he said. “The best case is, it will look like Fishers with 116th going through Fishers and dividing it right in half. There’s no easy way for folks to get from one side of the street to the other side of the street. We have identified we want to be a walkable city, and I don’t think you can be a walkable city with a five-lane highway going through.”

Instead, Johns hopes the city can agree to a road diet, which is essentially a boulevard with one wide lane in each direction with a bike path.

“That would be very walkable, and it would help to hold our city together and develop the city,” Johns said.

Cook said it’s impossible to know the true cost of a project until bids open.

“Sometimes they’re over, and sometimes they’re under,” Cook said. “We’ve been successful with our roadway projects (in) that many of our projects come in under budget, like East Street (through the Northpoint development), which was $900,000 under the estimate.” 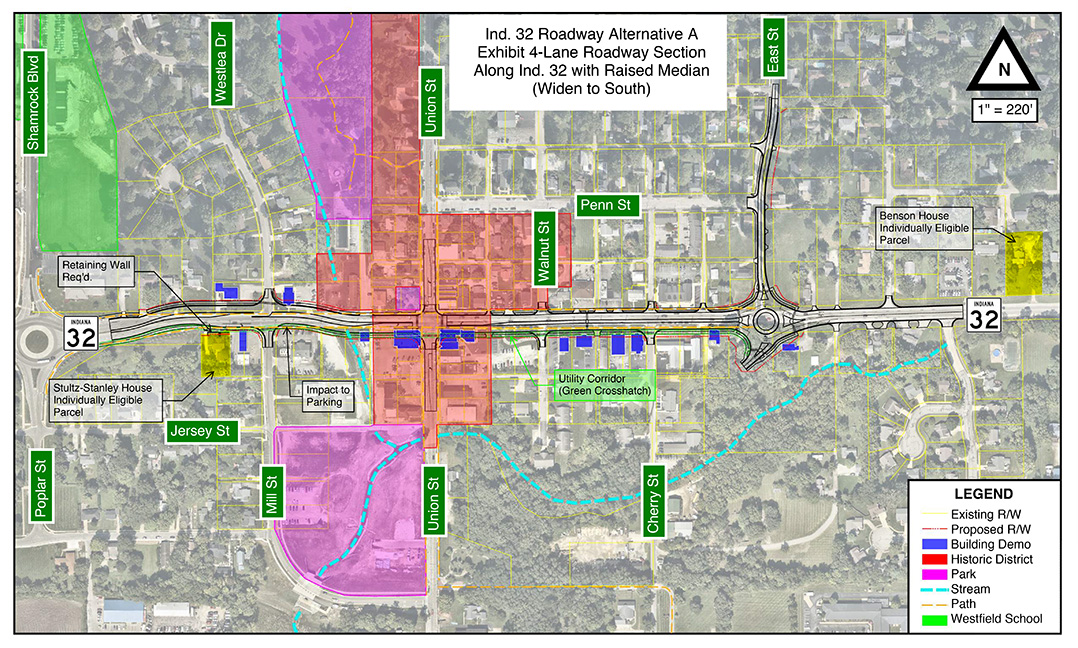 If completed, the Ind. 32 project would widen the road to four lanes from Westfield Boulevard to East Street. (Submitted image)

The added travel lanes to Ind. 32 were originally proposed by the Grand Junction Task Group, a citizens’ volunteer group responsible for the design of the area. The group knew INDOT eventually planned to add travel lanes to Ind. 32 through Westfield’s downtown, but leaving the project up to INDOT meant the expansion likely wouldn’t happen until 2030.

“(The group) pressed for adding one additional lane in each direction to make it four (lanes) with our design,” Cook said. “(If we waited until 2030), INDOT would do everything their way. Their way would be that it would look like 32 west of the Monon bridge – no medians, very little landscaping, no lighting. So rather than allow INDOT to do this, we would do it on our own.”

Several years ago, Cook proposed for the city and INDOT to partner on the project and that the city could begin developing it sooner than INDOT could.

“The development was coming to our downtown,” Cook said. “I couldn’t really wait another eight to 10 years. I proposed we split the cost and that the City of Westfield will manage the project, and the state of Indiana will do the land acquisition process and the city will manage the construction and design, and therefore we have influence on the design.

“We have influence on a very important piece, which is the maintenance of traffic during construction and how can we least impact our businesses. By having our people manage that, I am most comfortable.”

Because of requests from the public to maintain some of the historic buildings in downtown Westfield, the city moved the Ind. 32 project slightly to save a historic home. It also is working to save the building on the southeast side of Union and Ind. 32 that used to house Erika’s Place. The new historical mitigation efforts added roughly $900,000 to the price, raising the project’s cost to $16 million. The City of Westfield is responsible for any costs above the 50/50 split with INDOT.

Cook said the entire portion of the Ind. 32 project Westfield was responsible for would be completely funded with cash saved from the city’s road impact fees and that no debt would be acquired. He said the downtown Westfield segment of Ind. 32 sees 17,000 vehicles a day.

“By next year, the entire segment will be rated from standard INDOT mobility standards as an F,” Cook said. “The traffic, especially in the afternoon, backs up from Union Street west clear to the Poplar Street roundabout, and similarly, it backs up to the east. That’s today. The future is we have a lot of building going on on our east and west sides, so these traffic numbers are only going to grow as our city grows.” 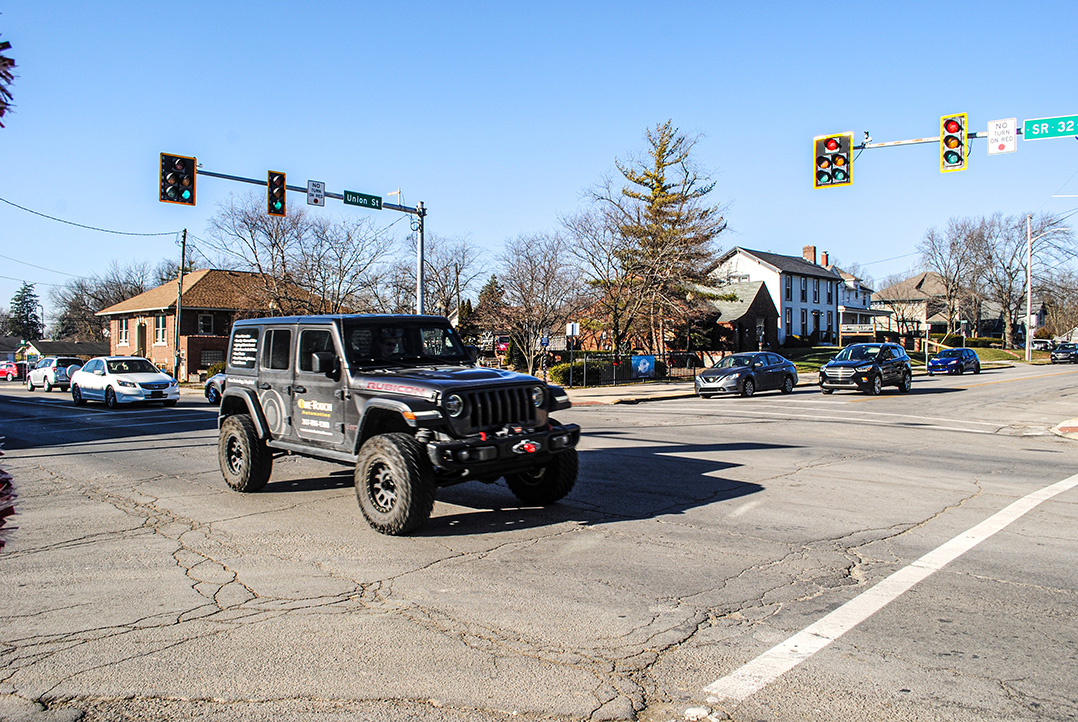 In addition to the main concern of not improving the roadway if the council decides to break the interlocal agreement, Cook said there would be many other indirect impacts of breaching the contract with INDOT. The city would owe all the INDOT expenses that have occurred to date, which are approximately $450,000. The city also has incurred approximately $1 million of its own engineering costs.

Cook said that in 2028, INDOT plans to add lanes to Ind. 32 from East Street in Westfield east to Noblesville, which is figured into INDOT’s plans and would be 100 percent funded by INDOT. However, that wouldn’t happen if the Ind. 32 widening in downtown Westfield doesn’t happen.

“INDOT has stated that if Westfield fails to widen our downtown, INDOT will cancel the additional lane project to Noblesville, because it makes no sense to have four lanes to the west and four lanes to the east and an existing pinch point in the middle,” Cook said.

“INDOT has told me that because of the way they have different pots of money, the pavement in downtown Westfield today is very poor and needs to be reconstructed, but if we pull out of this project and do not reconstruct that pavement, we do not have resurfacing funds available for another six to seven years,” Cook said. “So, that pavement will sit there for another six to seven years and deteriorate beyond the poor condition it’s in today.”

“We also feel like we are putting future roadway shared funds in jeopardy,” Cook said. “We have a lot of projects that we share costs with INDOT, such as the 161st and Union Street roundabout, and the 169th and Spring Mill roundabout. (Breaching the contract) would damage the relationship. All Indiana cities participate in Community Crossings (grant) money, which is solely at the discretion of INDOT on how to dish that out.

“We feel like by breaching our contract, we are going to damage our future awards from INDOT.”

However, Johns said he feels like the city is using INDOT as a threat instead of the concerns being true concerns.

“It was almost like the administration was using INDOT as a threat to say if we decided to have a boulevard through the heart of the town, that INDOT would suddenly refuse to allow us to put a roundabout at East Street, which prevents us from widening Jersey Street, which are both absolutely critical to building the city infrastructure to sustain the growth that’s coming to the downtown area,” Johns said. “So, at the end of the day, we decided that the administration would arrange a meeting with INDOT so I could ask them specifically that question.”

Johns said the meeting was supposed to be scheduled prior to the April 12 council meeting, but as of press time, Current was unable to confirm if the meeting with INDOT was scheduled.

“It has a roundabout at each end, and a (pedestrian crossing) in the middle, which is exactly like this design,” Cook said.

“The width of Clay Terrace Boulevard from curb to curb, as it compares to the width of our proposed project curb to curb, is within 12 inches of the same dimension,” Cook said. “There would be similar crosswalks.”