Quinn Cavin started acting classes with his mother when he was younger, mostly because he was bored with school.

“Luckily, she encouraged me to stay in school.”

Cavin graduated in the top 10 of his class academically at Mooresville High School. Cavin, who turns 24 April 16, graduated from Wabash College in 2019 with a double major in psychology and theater. An honors student, he was selected to give one of the two student commencement addresses at Wabash.

Cavin performed in school plays in high school and in college.

His parents, Curt and Becky Cavin, moved to Noblesville when Quinn started college and now live in Westfield. Curt is a former Indianapolis Star sports writer who now works for IndyCar and the Indianapolis Motor Speedway

Cavin, who now lives in Burbank, Calif., moved to New York after graduating from college. He quickly found success as he made a short film called “The Dine-and-Dash Dater” with another Wabash graduate, Ryan Cairns, shortly after moving to New York.

“It’s based on a real-life news article that Ryan had shown me, ‘The dine-and-dash dater,’” Cavin said. “This guy had been going on hundreds of dates on dating apps. He’d show up to dinner early, order an entrée and then order another entrée with his date, take another to go and just slip out the back door. All the women put the pieces together that this was the same guy. The story went on even after we finished the film. But he was finally arrested and charged with the felony with the sheer numbers of bills he’s skipped out on paying.

“I thought the story was a funny real-life thing and we kind of adapted that to a fun movie to make.”

Cavin wrote and directed the film with Cairns. Cavin’s girlfriend, Mafalda Pinto Correia, from Portugal, portrays the main character since the story is told from the perspective of the girl who is left from dinner. They set up a sting to catch him.

While in college, Cavin took a semester off, from January to July in 2018, to study in New York City, winning a scholarship to study at the Lee Strasberg Theatre and Film Institute. He met several actors, including his girlfriend, who he used for the film. They were in an acting class together.

The short film was completed at the end of 2019 and won the Best of Fest at the 2020 Strasberg Film Festival in February 2020. It was nominated in several categories.

“It was in a handful of virtual festivals,” Cavin said. 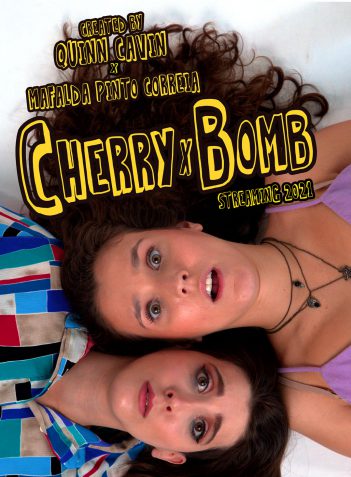 Cavin said because of the short film success, they decided to produce a series called “CherryBomb,” with Correia as the lead and co-creator.

“We took the core characters that are in ‘The Dine-and-Dash Dater,’ minus the guy doing the dining and dashing,” Cavin said. “We took the tone of the film and adapted it to be a TV show. The story is about entrepreneurialism and the experience of finding your way in the world as a young adult.”

The six episodes, which were filmed during the summer of 2020, are about 25 minutes each.

“There were obstacles filming in New York during the pandemic,” Cavin said. “It was an ambitious thing for us to do and none of us were sure when we were shooting the first episode that we would make it all the way to six episodes because of the time, energy and money it takes to produce even one of them.”

The series is in post-production, and Cavin hopes to find a streaming home later this year.

Cavin recently took a job as a writer and production coordinator at Echobend Pictures.