Jim and Donna Fleming moved to The Oaks in Hoosier Village for two major reasons.

The Flemings, who have been married 47 years, have lived in The Oaks, an independent living section, since June 2019. They previously lived in Columbus, Ind. 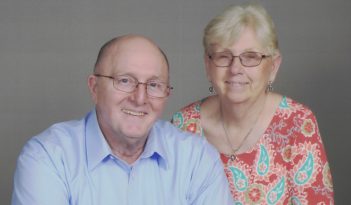 A main motivation was wanting to be closer to their daughter, Katie Delp, who lives in Thorntown with her two children, an 8-year-old boy and 10-year-old girl.

“The other reason is maintaining the house was starting to be a problem, keeping the lawn up and garden,” Jim said. “One of the big drivers of coming to a retirement community was having that work taken care of for us. I’m really impressed and happy for the work they’ve done for us, not just keep up the property, but when we have a problem with the house coming over to fix it. That’s been a real blessing.”

Donna said they moved into a brand-new duplex with a finished basement.

“There’s an area there that gives the kids a lot of room to play when they can’t go outdoors,” she said.

Jim, 74, worked several different jobs during nearly 40 years with Cummins. He was a business systems analyst before retiring in 2006.

Donna, 76, grew up in Connersville. Jim is from Holyoke, Mass. The couple met in Columbus.

Donna, who added everyone in Hoosier Village is friendly, participates in an exercise class and a gentle yoga class.

“Everything shut down in March 2020 (with the COVID-19 pandemic) but during the summer they started back with a limited number coming back to exercise and swim,” Donna said.

Jim said he enjoyed the monthly celebration dinners. Before the pandemic, they would celebrate those with birthdays and anniversaries that month.

Jim was involved with water aerobics prior to the pandemic.