You are at:Home»Current in Geist»Geist Cover Stories»Must go under it?: McCordsville wants to tunnel out of congestion issues on Mt. Comfort Road

If motorists can’t go over the railroad tracks, or through it, they must go under it. At least, that is the solution the Town of McCordsville came up with to resolve its long-standing dilemma of the CSX railroad tracks crossing Mt. Comfort Road and backing up traffic.

“A year or so ago, the council authorized a study to look at whether we needed to go over the tracks, under the tracks or do an at-grade surface improvement,” Town Manager Tonya Galbraith said. “It came down to the underpass being the most viable (option), as far as it took out the least amount of property and having the best chance of INDOT being on board with (the project).”

The underpass solution is not an inexpensive one. The estimated cost of the entire project is just under $40 million. The vast majority of the cost — $28.3 million, 71 percent of the total project — would be for construction. Other costs include $5.5 million in property acquisition, $3.5 million in construction inspection and $2.5 million for design. The project is supported by the council on the condition that funding can be secured.

“He shared a video, and, frankly, at that point, that seems really out of the box,” Gailbraith said. “But our staff looked at it again and thought, ‘No, there is something to this.’”

The underpass proposal gained momentum as the town’s research into at-grade and overpass solutions fizzled out.

An at-grade solution would have been the least expenstive option of the three, costing $9 million, but according to a town funding document would amount to “a mere bandage, as it did nothing to remove the impediments caused by the rail crossing.” With that option, traffic would continue to back up whenever a train passed.

Complicating matters, the population of McCordsville is growing. The expectation is that McCordsville, which has approximately 7,000 residents, will have more than 19,000 residents by 2030, which would only worsen congestion caused by the passing trains.

The overpass proposal ran into even more obstacles. Between the design and land acquisition hurdles, the town stated in the funding document that an overpass or bridge “(was) difficult if not impossible to build.” An overpass project would have cost $32 million.

Adding to the difficulty, not only would a bridge project significantly impact the properties around the tracks, but there was no guarantee the project would receive state approval.

“When we looked at that overpass, or the bridge design, INDOT would have wanted the construction of the overpass to meet 40 mph design-speed criteria. What that means is that the road is designed for vehicles to travel 40 mph, irregardless of what the road is actually posted as a speed limit,” McCordsville Director of Planning and Building Ryan Crum said.

The portion of Mt. Comfort Road that approaches the railroad track has a speed limit of 30 mph.

“INDOT wanted to ensure a certain design speed that was consistent with how the road was designed elsewhere through McCordsville and Fishers and etc.,” Crum said. “When you apply that 40 mph design criteria to an overpass that has a very high bridge, it makes the grade more gradual and you impact a lot, a lot, a lot of properties.”

The question remaining is how to fund a nearly $40 million underpass project.

“We are what we call ‘funding hunting’ right now,” Gailbraith said.

A first option is federal funding, such as through President Joe Biden’s infrastructure plan: The American Jobs Plan. Gailbriath said the town has reached out to U.S. Rep Greg Pence’s office for assistance in obtaining funds for the project.

“We are looking at all avenues,” Crum said. 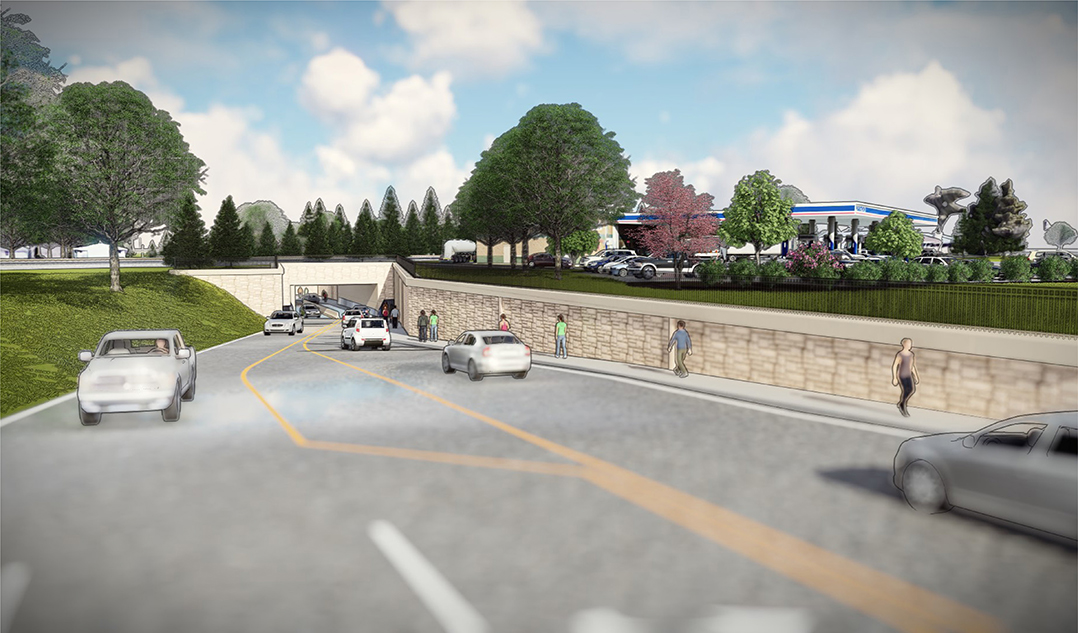 How long would construction on the underpass take?

The project would take nearly two years from beginning to end. Construction on the stretch of road where the underpass would be constructed would take seven months of a 21–month total construction project.

By comparison, if the town had pursued the overpass option, a large stretch of Mt. Comfort Road would have had to have been closed for the entire 16-month construction project.