COVID-19 put a damper on many things for me, especially travel, and when you’re the kind of person who is always researching the next destination to visit, remaining stuck at home can be a real bummer. As travel begins to open, especially stateside, I decided to indulge and take a trip I’ve always wanted to: The Bourbon Trail.

There are only 18 distilleries on the true, trademarked Bourbon Trail, but there are dozens throughout Kentucky. I went on the trip with my older brother, Matt Skinner, and we didn’t really follow the rules in that we didn’t stick to only true Bourbon Trail distilleries. We saw three official Bourbon Trail distilleries: Stitzel-Weller in Louisville, which houses Bulleit; Blade and Bow and I.W. Harper, Maker’s Mark in Loretto; and Woodford Reserve in Versailles. However, we went off the beaten path a little and also visited Willet in Bardstown and Castle and Key in Frankfort. 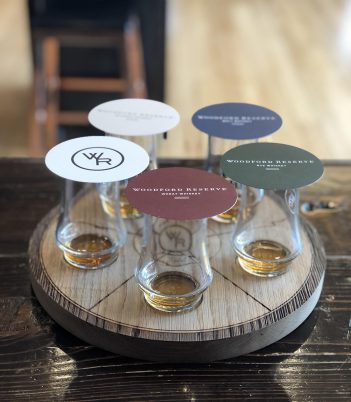 At Woodford Reserve, the experience included a guided tasting of five of Woodford’s whiskeys, one of which was its traditional bourbon. The others were a cask-strength bourbon, a malted barley whiskey, a rye whiskey and a wheat whiskey. (Photos by Anna Skinner)

Many novice drinkers say they enjoy bourbon, but do they really know what bourbon is? For a whiskey to truly be considered bourbon, the mash must be at least 51 percent corn; it must be made in the United States; it must be aged in new, charred oak barrels; the whiskey cannot enter the barrel at higher than 125 proof; and nothing can be added except water, so true bourbon isn’t influenced by any ingredients other than its own mash bill, which is a mix of grains like corn, wheat, rye and barley that are cooked and then fermented to make bourbon.

Our first stop was Willet Distillery in Bardstown. I’ll save you all the details about each distillery in hopes that you’ll make the trip to travel the trail yourself.

After our 45-minute tour, we tried to find lunch before our next tour at Maker’s Mark and were unsuccessful. This leads me to my biggest piece of advice: You must make reservations. Because of COVID-19 restrictions (and Kentucky state guidelines are a bit further behind than Indiana is in terms of reopening), every place books up fast. There’s a limit on how many people can take part in the distillery tours, and my brother and I had to keep an eye on when reservations opened up and quickly book those tours weeks in advance because they filled up within minutes of opening.

Although we made our tour reservations, we forgot to think that restaurants would be a similar issue. And you don’t want to be stuck on the Bourbon Trail without any sustenance.

As we sampled the bourbon, we were taught to breathe in the scent with our mouths slightly open, which lets the alcohol fumes escape so you can actually note the flavors. When we took a sip of neat bourbon and it carved a fiery path down our throats and warmed us from the inside out, we learned that was called “The Kentucky Hug,” which, after a weekend of tasting, we fondly referred to as “The Kentucky Gut Punch.”

On Sunday, we visited Woodford Reserve for a guided tasting, then Castle and Key, a new distillery that is still aging its bourbon but currently offers vodka, gin and rye. Although its bourbon isn’t ready, Castle and Key should top the list of places to go when you’re on the trail. It’s a beautiful distillery housed in an actual castle originally built by Col. Edmund Haynes Taylor, Jr., also known as E.H. Taylor, another bourbon distiller. Taylor built a castle on the site with a classical springhouse and sunken gardens but later abandoned the distillery. Castle and Key purchased the abandoned distillery, then in ruins, in 2014 and refurbished it to be the beauty it is today.

We finished our trip at Stitzel-Weller back in Louisville.

My favorite of all was Maker’s Mark. The campus was beautiful, the lush rolling hills of Kentucky accentuating the trees, which are covered in an eerie black fungus called Baudoinia compniacensis, which feeds on ethanol. The fungus isn’t harmful to humans or animals, but it covers everything from the rickhouses where the whiskey ages to the trees and even cars and houses. One tour guide told us the fungus is how underground distilleries were discovered and bootleggers were charged during Prohibition, which is a neat fact.

There’s only so much information I can fit in one story, so all of the food information from my Bourbon Trail trip was published in the May 4 At the Table with Anna review.