Holli Sullivan became Indiana’s 62nd secretary of state in March, replacing Connie Lawson after her resignation. The Evansville resident and married mother of three previously served as a state representative from 2014 until her appointment.

Sullivan, a Republican who recently announced that she plans to run in the 2022 election to maintain her position, stopped by Hamilton County on June 8 to visit with local business leaders and share about initiatives under way in her office.

She also stopped in Carmel for an interview with Current.

What is your top priority as secretary of state? 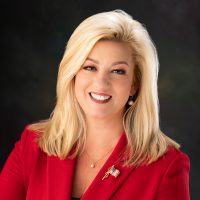 To continue to have transparent, free and secure elections run by the state. It’s very important that we think toward the future. We have a runway this year because we don’t have an election, and I can spend time getting to know each of the county election officers and their successes from 2020, but also plan with them the future infrastructure needed.

I also want to continue the momentum in the Indiana business services division. The INBiz portal has 70 online services, but it’s time to meet with users of those services and business owners to see what we can do next to get government out of the way of business and allow it to grow.

Election fraud has been a big topic nationwide in the last year. Do you see areas where Indiana’s handling of elections should change?

We had an extremely successful election in 2020. We had the highest voter turnout since 1992. We had changes due to dates and pandemic and processes that we have never had to face before at a local level, and we had no recounts, no fraud and no problems. So, for us, we need to maintain what we have, which is a good place to be.

Every county (election official) I’ve talked to completely agrees there are always ways in which we can help the process by educating Hoosiers on securities that already are in place, and we’ll do that. We’ll partner with local communities to increase messaging. That’s extremely important right now, because there is a lot of noise coming in from other states about how they run their elections. They’re not as transparent, not as secure as Indiana, and that puts seeds of doubt in voter confidence.

Not much has changed in Indiana election law in recent years, but has the national discussion led to decreased voter confidence here?

We had a strong turnout (in 2020), but post that turnout there’s been all that news, so I think the confidence has been shaken. When you redirect the conversations back to the Hoosier experience of voting in our state, you see it’s not about the Indiana experience.

Your office has begun sending postcards to Hoosier voters to help keep voter lists up to date. How does this process work?

Voter list maintenance is a federal requirement, and Indiana does it really well. It’s a white postcard, and we’re trying to get the word out that it’s legitimate. It shares with the voter that if everything is correct, they don’t have to do anything, but if they’ve moved, like a lot of people during COVID, they need to update their address. It gives them a way they can do that, either online or by returning the postcard. If it comes back to the office as a bad address, we’ll forward it to what we have on file with the post office and reach the voter that way.

Voter confidence is increased when you know your voter registration information is correct, but it also helps save taxpayer dollars. When we put together the voter list, we make a lot of predictions and assumptions off that list, such as how many (voting) machines are needed in each polling district. So, all of those numbers are tied to cost and how we run our elections.

Also, if we walk in as a voter and we see somebody on the voter rolls that we know hasn’t lived in the state for a few years or maybe passed away, it plants a seed of doubt that we have the right voter list, so we protect that voter list maintenance process in Indiana.

Before getting into politics, you were an automotive engineer and small business owner. Did you previously aspire to hold statewide elected office?

Spending eight years in the legislature, where I got to travel the state putting the budget together, during that time I don’t think I ever thought, “Oh, I’m going to run for secretary of state someday.” I really just wanted to get to know more of Indiana and make a difference. So, when I was considered for secretary of state, it really was like coming full circle. It’s fun to have constituents statewide instead of just southwest Indiana. My heart is always going to be in southwest Indiana, but it’s nice to be able to work statewide and help Hoosiers everywhere.