By any measure, 2020 was a wretched year for the entire world. But even before the COVID-19 pandemic shut down the globe, the business climate for two local artists soured at the dawn of that accursed year.

The pandemic only made things worse for Luke Crawley and Quincy Owens, who operate the artist collective Owens+Crawley in Indianapolis, where they create public art and gallery-based work on commission. 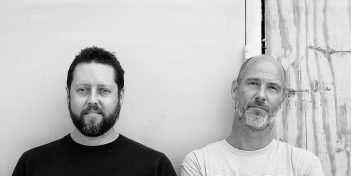 “Our year (2020) basically started off by getting an email in February stating that our second-biggest project to date in North Carolina, that we had been working on for over a year, was flat-out canceled because they found asbestos in the soil at the park where the artwork was going,” said Crawley, a part-time artist and full-time teacher at University High School in Carmel. “That project was basically our year to that point, and we had nothing lined up. We had the rug pulled out from under us.

“Then, of course, the shutdown happened in March, and everything slowed down on other smaller projects or potential jobs we had in the works. It was very uncertain for us.”

Fortunately for Crawley, a Fishers resident, and Owens, an Indianapolis resident and full-time artist at the Harrison Center for the Arts, their prospects brightened in May 2020 with a couple of lucrative projects in Washington, D.C. Still, the overall year was less than cheerful, which inspired them to create and sell a popular holiday ornament with the inscription “F*** 2020,” which, in turn, captured the attention of Paul Nethercott, an award-winning independent filmmaker who is creating a short documentary by the same name.

Nethercott’s film, which he plans to release before the end of the year, explores Crawley and Owens’ challenges, including personal struggles and anxiety over canceled events and delayed projects, during 2020. A Kickstarter for the film is under way through June 29. The fundraising goal is $25,000.

“For most of us, 2020 was full of loss, fear, uncertainty and pain,” Nethercott stated. “When Quincy posted a photo of a F*** 2020 Christmas tree ornament on social media, it resonated with me, for reasons that are hard to explain. My vision is to make an extraordinary film that is relatable, humorous, thoughtful and reflective.”

Nethercott’s previous films include “Grateful: The Jenni Berebitksy Story” and “Jitensha,” works that Crawley and Owens both admire. Although the new film is in the early stages of production, they are confident it will tell a compelling story about the trials and tribulations of the previous year.

“I do know that Paul is a fantastic filmmaker, and while we may be the primary subject matter, he is the artist and we put our complete faith in him to tell the story that he sees,” Crawley said. “I know it will be one that will be very interesting.”

Crawley and Owens have worked together for more than 10 years. Their artwork includes the 30-foot illuminated sculpture “Sail” on the Monon Trail near Sun King Carmel.

To donate to the Kickstarter, visit kickstarter.com/projects/paulnethercott/f-k-2020?ref=creator_nav.