You are at:Home»Current in Fishers»Fishers Cover Stories»Spark!Fishers returns: Annual celebration of Americana back after a year off

After a one-year hiatus, Spark!Fishers returns June 22 with a new five-day format. Two concerts, a 5K run/walk, a car show, parade, street fair and a fireworks display highlight the festivities.

“It provides people the opportunity to be a part of a community event, even if maybe, that weekend, they are out of town,” Fishers Mayor Scott Fadness said. “They can hit the 5K, or if they can’t make the 5K that weekend they can make the fireworks and the parade.”

The 2020 Spark!Fishers event was canceled because of the COVID-19 pandemic, but positive vaccination trends helped planners decide to move forward with this year’s event.

“It’s really vindicating in the sense that Fishers almost leads the country in vaccination rates, and one of our goals this spring was to do that so that we could have a great summer,” Fadness said. “Here we sit with great vaccination rates, and then to put on a series of events this summer, that really should be fantastic. It should be a good rebound from what was such a difficult year for so many people.”

A key aspect for Spark!Fishers this year will be to honor those who worked through the pandemic to make the event possible in 2021.

“We really wanted to put our focus this year on honoring our hometown heroes, our first responders, medical professionals, police and fire, and also as a welcome back to the community,” Fishers Parks and Recreation Director Sarah Sandquist said.

“Then we will have a video playing inside City Hall of interviews with local heroes and highlighting their stories,” Fishers Community and Public Relations Assistant Director Stephanie Perry said. “People can come in and cool off and participate in honoring our heroes.”

With the exception of registering for the 5K or entering a vehicle into the car show, all the events of Spark!Fishers are free. But putting on an event like Spark!Fishers is not. The event will cost the city $85,000. Fishers also raised $200,000 in sponsorships for additional funding from companies like First Internet Bank, the presenting sponsor.

“It’s important to us because Fishers is our home as an organization, and we are making a significant investment in relocating our headquarters to Fishers downtown Nickel Plate District,” said Nicole Lorch, First Internet Bank’s COO. “We intend to be here for many, many years to come, and we love that we are able to help the City of Fishers come together and celebrate our nation and celebrate the community.”

Kicking off Spark!Fishers will be the Midtown Madmen, who play music centered on the 1950s and 1960s. The concert is part of the city’s Tuesday night concert series.

The concert will be at the Nickel Plate Amphitheater. Admission is free. Outside alcohol is not allowed but can be purchased on-site. Outside food, chairs and blankets are welcomed and encouraged. 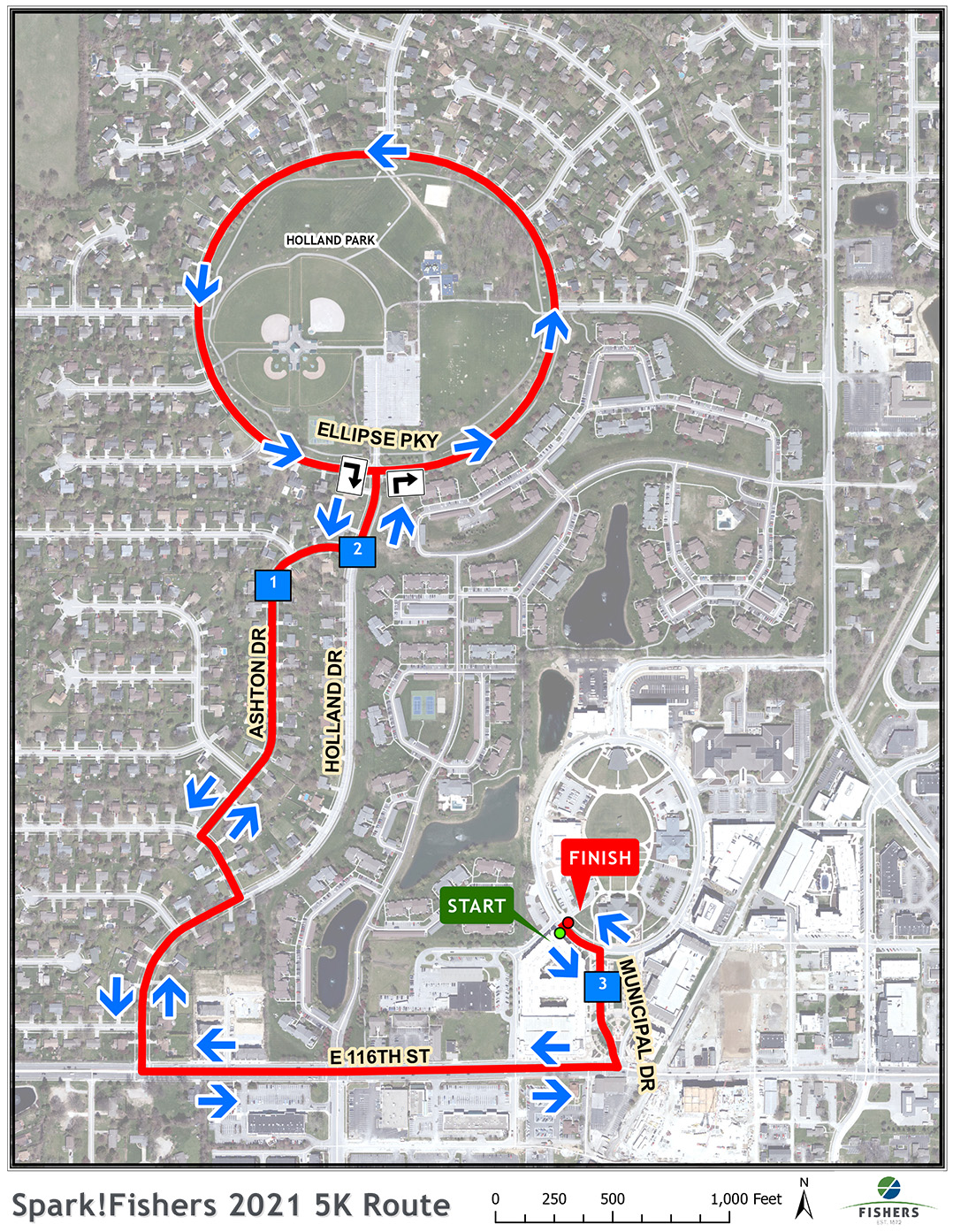 The two races will happen on a weeknight for the first time. The 5K route is through downtown Fishers. The race is planned to start after rush hour.

Leading the 5K race will be bicyclists from the First Internet Bank Cycling Team, a team of Category 1 (highest-ranking) cyclists that tour the U.S.

Held at Fishers central green, 1 Municipal Dr., the Car and Art show debuted two years ago on the week before Spark!Fishers, alongside the farmers market, but this year it will be included in the festivities.

“We had 65 cars show up and great turnout from people coming to look at the cars,” Sandquist said. “It made sense to us to grow this event.”

The car count for this year’s event is expected to grow, and there is room for 80 vehicles on the property. The car displays will be paired with an arts focused display. The city is partnering with the Fishers Arts Council to put together the Arts crawl component.

“We’ll have a variety of artists on-site and food trucks,” Sandquist said.

Approximately 30 artists are expected to attend, including the featured artist Gary Dausch, who will bring his mobile 28-foot gallery. Dausch specializes in original art, limited edition prints and apparel.

The concert will be held at the Nickel Plate District Amphitheater and is free to the public. The band had a couple of top 20 hits in the early 1990s. Many factors had to fall into place to draw the group to Spark!Fishers.

“When we heard the Spin Doctors were available, we jumped on it,” Sandquist said.

Like the Tuesday concert, outside alcohol is not allowed but can be purchased on-site. Outside food, chairs and blankets are welcomed and encouraged. 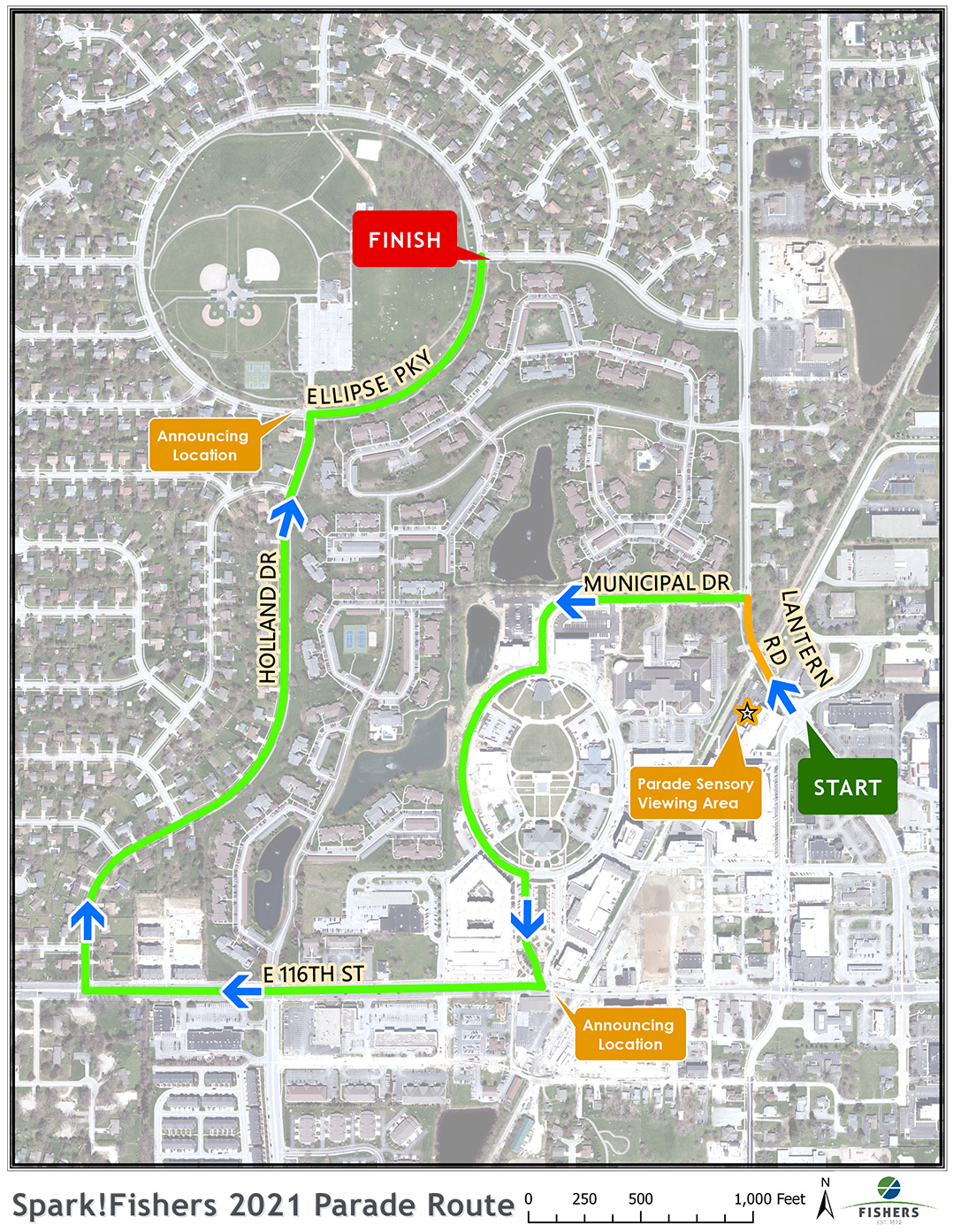 The parade will start at 6 p.m. June 26 on a new route that passes through the festival and down Municipal Drive.

The finale is centered on the central green. The street fair, parade and fireworks can be seen from that location.

The day unofficially begins with a farmers market held every Saturday during the summer at 6 Municipal Dr., from 8 a.m. to noon. Spark!Fishers events begin at 3 p.m.

“From 3 p.m. to 10 p.m. we’ll shut down the circle. We’ll have 150 vendors. There will be artist and artesian tents. We’ll have a Ferris wheel out on 116th St. When you get to the top, you’ll be able to see down into the (under construction pedestrian) tunnel,” Sandquist said.

There will be three different musical stages, a kids zone and a teen zone.

At 6 p.m., the parade begins and proceeds from Lantern Road, west along Municipal Drive and down the western edge of the central green before heading west on 116th Street and north on Holland Drive before ending at Ellipse Parkway.

“I’m a parade guy. I’ve always enjoyed the parade, even though every year that I’ve been a part of it it’s like 122 degrees outside, and I feel bad for the kids in the band with their uniforms on,” Fadness said. “The parade is a slice of Americana. It really is. Seeing everyone out, it’s just a fun time.  I’ll probably be walking in the parade this year.

“I’ve been in the car before, but my family is so big now that they’d have to have some sort of larger vehicle, anyway, so I’ll be walking in the parade with the fire and police chiefs.”

At 10 p.m., the fireworks begin. They will be launched from Holland Park and will be visible from the central green. Holland Park will be unavailable for viewing because it will be closed and secured.

“I really love the fireworks show at the end of the night because it’s just this culmination of everything,” Sandquist said. “I don’t want to leave out everything that happened prior to that, but it is a cool sight to see everyone come together and have a true community feel to watch the fireworks.”

Landing a nationally touring band like the Spin Doctors to perform at an event like Spark!Fishers is, as Sarah Sandquist, Fishers Parks and Recreation Director, put it, “tricky.”

“There’s a lot of factors that go into it,” Sandquist said. “Money is an important component of that. But also, you’re dealing with availability. You’re dealing with if they are willing to do a free show. A lot of times when we are dealing with a national artist, we are throwing everything at the wall and seeing what sticks.”

The process to book the Spin Doctors began in March. If an artist or band is on tour and playing in a nearby market, like Louisville or Chicago, then it is less expensive to bring them to Fishers because they are already nearby. Booking a national touring band for Fishers costs between $20,000 and $50,000.