You are at:Home»Current in Noblesville»Noblesville Community»New coach McClelland confident Noblesville High School on cusp of winning

“Noblesville has always had a strong tradition in basketball,” he said. “They’ve had great players. They’ve had some great coaches. I think there is a (high) level of interest from a fan’s perspective. I think they are truly on the cusp of winning. They’ve made some big strides in the last few years. Ultimately, that intrigued me. I think I can help get them over the hump.” 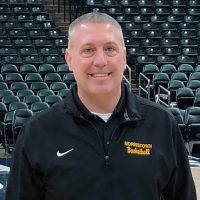 “What sets Scott apart from others is his ability to not only teach the game of basketball, but to use basketball to teach lessons about life,” Wooldridge stated. “His coaching makes teams stronger because he builds unique relationships with each player, learning what they most need from him to bring out the best in themselves. I’m excited to see what’s next for this team.”

“We’ve had an unbelievable stretch in the last six years,” said McClelland, who began his second stint with Morristown in 2015. “It’s bittersweet (leaving). I wasn’t unhappy. I can’t say enough positive things about the school, the town or the community.”

But McClelland said Noblesville was too good an opportunity to pass up.

Noblesville was 11-11 last season, including 2-5 in the Hoosier Crossroads Conference. John Peckinpaugh resigned after two seasons to take the job as Kokomo’s boys coach. His wife is the Kokomo’s girls basketball coach.

“They’ve got a nucleus of four or five kids that got some valuable experience,” McClelland said. “We’ll just try to get those kids to buy into what we want to do.”

“I’m going to try to approach this the same way at Noblesville as we approached going back to Morristown — high expectations, cultivation of player development and a winning attitude,” McClelland said. “We were able to do that, and I think we can do that at a bigger stage in Noblesville.”

McClellan knows that Noblesville plays in one of the toughest sectionals in the state. The field includes defending state champion Carmel, Westfield, Zionsville, Hamilton Southeastern and Fishers.

“That sectional is brutal, but I just feel there is no reason why we can’t be in the same conversation as some of those other schools,” he said.

McClelland and his wife, Sonja, and his daughter, Anna, who will be a fifth-grader, live in McCordsville. McClelland will teach wellness at NHS.