Lexi Villamin has always enjoyed creating art but didn’t take it seriously until the past year.

Suffice it to say, she’s come a long way quickly. 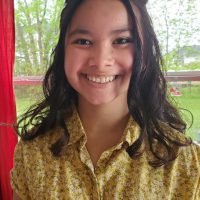 Villamin, a junior at Guerin Catholic High School, recently put the finishing touches on a colorful mural painted on a wall inside the parking garage of the lower-level entrance to the new Hotel Carmichael in Carmel. The work is of a horizontal keyboard bordered by vivid designs above and below the black and white keys.

A 16-year-old Carmel resident, Villamin worked on the project for two months. She completed the 64-foot wide by 9 1/2–foot tall painting on May 31.

“I’m very proud of it. This is probably the biggest project I have ever taken on,” Villamin said. “Although it isn’t perfect, I am proud of the work I put in and proud of the end result.”

Villamin’s design for the mural was chosen by Pedcor Companies, which developed the boutique hotel in a public/private partnership with the City of Carmel.  Villamin, who is enrolled in Guerin Catholic’s IB visual arts class, originally submitted the design for consideration at the Indiana Design Center in Carmel, but Pedcor – which also developed the design center — wanted the mural for the Hotel Carmichael.

“Every year, the IB art class at Guerin paints a mural at the Indiana Design Center,” Villamin said. “We all submitted our designs for that mural, and mine did not get picked. But Pedcor, who selected the mural for the design center, saw my design and wanted it for the hotel.”

Not surprisingly, Villamin was thrilled to be selected.

“Ever since I was a little kid, I’ve always had a fascination with art,” she said. “It was always something I did for fun, and I never took it too seriously until this past year. I have taken several art classes in both middle school and high school but never had a lot of formal training.

“This is part of what made the mural such an amazing opportunity.”

For Villamin, the main challenge of completing the project had nothing to do with the size of the mural. Rather, it was finding the will power to avoid distractions.

“One of the most difficult parts about completing this mural wasn’t even related to the art aspect of it,” she said. “Sometimes, it was difficult to just find the motivation to go out and do it. I have loved working on this project, but sometimes I just wanted to go hang out with friends or watch some Netflix instead of spending so much of my free time painting.”

Villamin, whose parents are Nathan and Victoria Villamin, plans to attend college and major in art with a minor in business. She has not selected a school but would like to pursue a career in art.

“I am very open to several careers,” she said. “But two of my top choices would be a Disney animator or a children’s book illustrator.”