Correction: An earlier version of this story incorrectly stated the number of branches TCU operates in Indiana. It operates 57 branches.

Work is under way to transform the former Steak ‘n Shake building at 635 E. Carmel Dr. into a Teachers Credit Union branch.

Much of the facade is being removed and replaced, but structural elements of the building on 1.1 acres will remain in place. TCU is using a new design for the branch, which is expected to serve as a prototype for additional buildings.

“This (design) is what we’ll look to use in the near future,” said Brandon Demitruk, TCU vice president of finance. 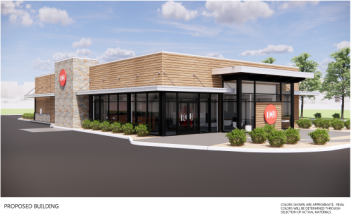 TCU will add two interactive teller machines, which are smaller than traditional drive-thru ATMs, on the southeast corner of the site.

The new branch is expected to open in the first quarter of 2022.

South Bend-based TCU operates 57 branches throughout the state, including one inside the Carmel Meijer, which will remain open. The new branch will be the first freestanding location in Carmel.

The Carmel Steak ‘n Shake was among five in the Indianapolis area to close in the spring of 2019. Restaurant officials originally said the closure would be temporary, as they were seeking a franchisee to re-open it, but that did not occur in Carmel.