Steve Peabody, 55, VoCare’s founder and board chairman, said this is not the company’s first attempt to make such a product. Peabody, a serial inventor, said he has developed between 400 and 500 products in his life and has 21 patents.

“If you go back 10 years ago, we developed the first FDA-cleared medical tablet that provided telehealth remote-patient monitoring,” Peabody said. “But we were so far ahead at the time, the deployments, even though they were (sent) to very large companies, were very small volume that could not support a large staff. So, I decided about 4 1/2 years ago to shelf that program.”

Peabody said the initial device and its setbacks helped him “understand the market and what was needed.” VoCare Inc. has since created a phone-sized device called the Vitals360, which received FDA-approval in late May.

“This next iteration is an iPhone-sized device that is thicker than an iPhone, but it also has all of the devices built into it,” VoCare President and CEO Ben Park said. “It has video built into it. It is just kind of revolutionizing the whole telehealth space because now you have a reliable set of vital signs.”

VoCare’s Vitals360 is a diagnostic tool that combines multiple biometric measurements into a single hand-held Android OS mobile device the size of a cellphone. The device was cleared by the FDA and approved by the Federal Communications Commission. It collects vital readings and can communicate the readings to a cloud database, giving health care providers a new way to remotely monitor patients’ health and vital readings.

“Instead of having six or seven devices, we could deploy one device that did everything,” Peabody said.

The Vitals360 measures a patient’s blood pressure, pulse, pulse oximetry, temperature, respiratory rate and electrocardiography. It also can collect and transmit data from other devices, such as scales. It also has a glucose meter, but Park said the device awaits results from clinical trials before it can be authorized to use the feature.

Company officials say the use of Qualcomm chipsets allows the device to operate on most wireless carriers worldwide or through a Wi-Fi network.

The Vitals360 contributes to the Centers for Medicare & Medicaid Services’ remote-patient monitoring initiatives by allowing patient health care data to be immediately measured and sent to any third-party cloud.

“Recently, CMS came up with CPT codes (which codify the type of procedure a patient has received) for such a device that had to be FDA cleared for remote patient monitoring,” Peabody said. “And they also have CPT codes for telehealth, so this would be the very best solution to meet the CPT codes for a physician to be paid.

“It does two things: It helps provide their Medicare patients with two or more chronic conditions better outcomes, which results in cost savings for Medicare (and), doctors get paid, so they get better revenue, and everyone is happy.”

The device will cost between $500 and $900, depending on the purchase volume.

With the onset of the COVID-19 pandemic, Peabody believes the need for a device such as the Vitals360 became more apparent. He said the company has received order requests from around the world and that the company will be expanding to a facility “shortly.” 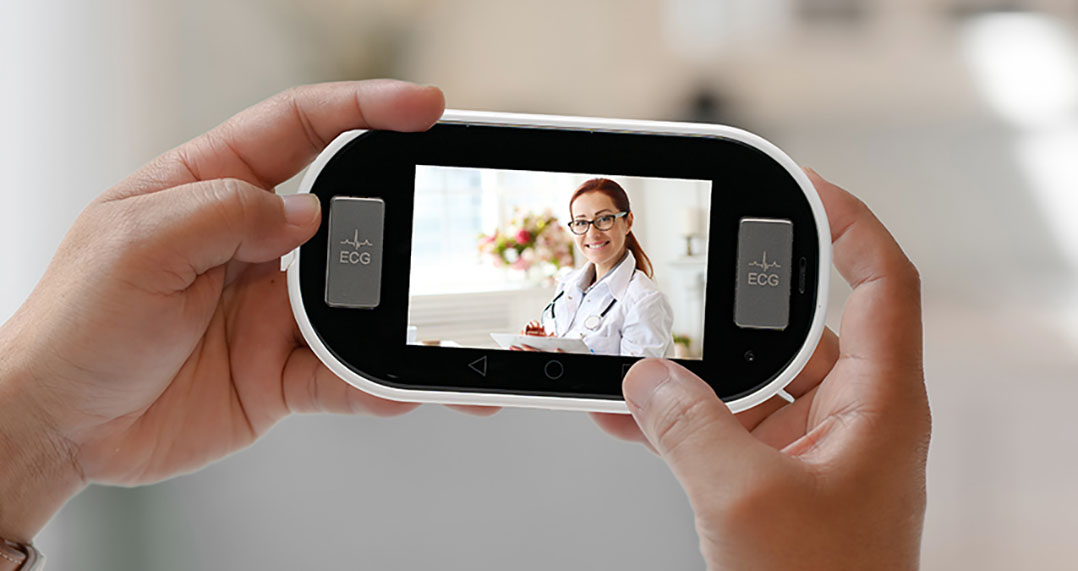 oCare’s Vitals360 is a diagnostic tool that combines multiple biometric measurements into a single hand-held Android OS mobile device the size of a cellphone. (Photo courtesy of VoCare)

Steve Peabody, VoCare’s founder and board chairman, said the company has been working with the U.S. Dept. of Defense and the Dept. of Justice to partner with the Navy and the Marines to reduce the weight of the multiple devices they use by selling them Vital360s. Peabody said the device could attract other buyers as well.

“First responders would be one (interested party),” Peabody said. “For the military, it would primarily be their medics that would want to carry this device. Even hospitals have been asking for this device so they don’t have to have an extensive cart to go from room to room.”

Peabody said the Dept. of Defense and Dept. of Justice have placed orders, as have hospitals.

“We got samples out to the government early so that they could view them,” Peabody said. “Also, (we) got samples out to Dr. Park, who was formerly with American Health Network as their CEO, and a few other key people to evaluate the device.”