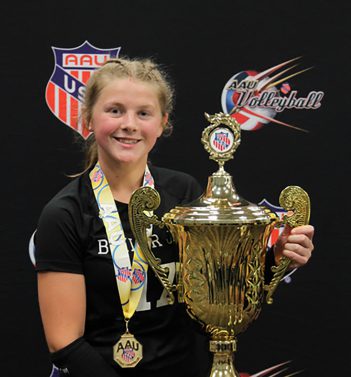 “We worked so hard, and our dedication and commitment earned a national championship,” she said. “It was such a great experience to have together.”

The Boiler Juniors capped off the season by finishing seventh in the 13-and-under division in the USA Volleyball Association Nationals in Las Vegas in early July.

Van Beynen said the team’s bond is what propelled its success,

“Our team practices a lot together, and we all work on drills on our own at home as well,” Van Beynen said. “Our team works very well together and we all respect and listen to one another. We are all each other’s best friends, and I’m glad it’s that way.”

Van Beynen, a 5-foot-7 defensive specialist who turns 14 July 28, was playing her first season for the Boiler Juniors.

“People are always surprised when I say I drive an hour and 20 minutes to West Lafayette in a carpool three to four days a week for practice,” Van Beynen said. “It’s not just the success that makes it worth it but it’s also the great coaches, teammates and training style that I love.”

John Shondell and Chandra Hepler served as the 13 Gold coaches for the Boiler Juniors, part of The Academy Volleyball Club. Shondell is the associate head volleyball coach at Purdue University. Hepler, who is a former University of Missouri player, is the head coach at Warsaw High School.