Austin Audia is convinced his play will be a unique experience for the audience. 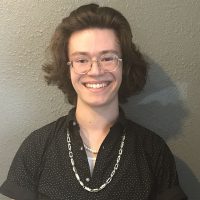 “This play is very unconventional,” said Audia, a 2021 Carmel High School graduate. “I would definitely describe it as something most theatergoers have never seen before. Aside with directing and writing, I’m producing, advertising and I also make music from the show.”

The four-person play is a mix of comedy, drama, science fiction and fantasy. The four actors are all from CHS theater classes.

Luke Vreeman, a 2021 CHS graduate, is playing Peyton Manning, who is possessed by a god.

Initially, Audia had discussed with Vreeman about being an assistant director.

“Then we had auditions. Luke is a tall guy, kind of looks like Peyton Manning, and he knows the story front and back. So, who better to play the leading role?” Audia said.

“There is a lot of drag inspired in the costume and the character,” Audia said of the waitress.

Sullivan and Tanner will be CHS seniors this fall.

Audia also creates dance music that will play before and after the show.

The play started with a 10-page script in 2019 developed his CHS theater class. He then sent the script to the Indiana Repertory Theatre’s Young Playwrights in Process. He didn’t make the first cut with the initial submission.

“I decided to dig it up, polished it up a little more and sent it in to the playwriting competition again (in 2020) and I made it to the second cut,” Audia said. “Through this process, there is a lot of getting together with playwrights from IRT and having lectures and ended up going through three levels of playwriting competition.”

Clark showed The Cat Theatre owner Will Wood a copy of the play. Then a discussion began which led to the production.