Submitted by Beef and Boards

As she steps onto the Beef & Boards Dinner Theatre stage for the first time, 9-year-old Louisa Zabel is already at home, bringing to life a story she knows well. 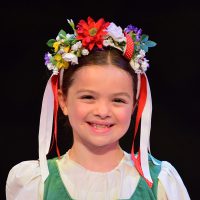 In fact, the Pleasant View Elementary fourth-grader from Zionsville seemed destined to perform in “The Sound of Music,” now on stage at Beef & Boards through Aug. 15. The story of the von Trapp Family has always been particularly meaningful to her mother, Kelli.

“My grandmother grew up on a farm in the mountains of Switzerland in the ‘30s and ‘40s,’” Kelli said. “(She) actually came over here after World War II, similar to the von Trapps, after meeting an American GI and following him here. When I was a child, she and my mom would play ‘The Sound of Music’ movie and soundtrack for us because it reminded her so much of her childhood.”

Now married to Tony Zabel, Kelli has passed down her love of ‘The Sound of Music’ to the next generation.

“When we found out we were having a girl, I loved the name Louisa and the tie to both ‘The Sound of Music’ and her Swiss heritage,” Kelli said.

Louisa went to sleep each night to her mother singing “Edelweiss,” just like Kelli’s mother had done for her.

When she was 4, Louisa watched the beloved Rodgers & Hammerstein musical come to life on stage for the first time.

“The first musical she ever saw was ‘The Sound of Music’ Broadway tour,” Kelli said. “Never did I ever think she would someday perform in this show.”

But perhaps it’s not surprising, considering the influence of the story and the music on Louisa’s young life. Although she’s not yet old enough to play her namesake, Louisa plays the role of the youngest von Trapp, Gretl.

She enjoys performing, having first played a school child in “Matilda” at Hendricks Civic’s production in 2020. Louisa said she likes “meeting new people and getting better at singing.” Her favorite part of “The Sound of Music’ is during the thunderstorm, she said, “when they sing ‘Lonely Goatherd.’”

“The Sound of Music” is the featured family show in Beef & Boards’ 2021 season, with $10 discounts off tickets for children ages 3-15. It runs through Aug. 15. For more, visit beefandboards.com.