You are at:Home»Current in Zionsville»Zionsville Cover Stories»‘A simple life’: Boone County man’s secret to living: ‘Don’t give up on it’

Off U.S. 421, heading east on Ind. 32, 10-foot dinosaurs, sprawling flowers and other oddities appear in a large field on the south side of the road. They are all made of old car parts, farming equipment and other discarded metal materials — the imaginative creations of Ernie and Dottie Taylor.

In 2019, Dottie, Earnie’s wife of 62 years, died, and he now lives with his small dog that waddles because of its weight. Three months ago, Taylor, 93, suffered a massive heart attack, leading to the placement of a third pacemaker. Although his recent health setback means his movements are diminished versions of what they were, he remains optimistic.

Taylor grew up during the Great Depression, when, for many, food was scarce, jobs were limited, and abject poverty was rampant. He contends his family suffered as much as anyone and that “there wasn’t anybody raised poorer.” He said the family would often get by without shoes and by only eating parched corn heated on a stovetop during those years.

To escape his impoverished state, Taylor became the first of his family to graduate from high school. He wanted to specialize in something he knew would help him earn a living, so he focused on welding courses, which later led to a long career in the profession. He also said he lied about his age and joined the Army, serving in occupied Italy during World War II.

It was in Italy where he began measuring the worth of all the goods in the world in cheeseburgers. He said seeing the theater of war and experiencing hunger made him appreciate what he had.

Taylor now lives what he calls “a simple life” on his property off Ind. 32, where he has lived since 1962 and continues to measure an item’s worth in cheeseburgers. His house is more than 100 years old, and the heritage barn he works in is more than 50 years old. His truck, a red ’89 Chevy, is parked among a cluster of metal art pieces he has welded and crafted into shapes of floral arrangements, people and animals — a hobby he and his wife started when he retired nearly 25 years ago. 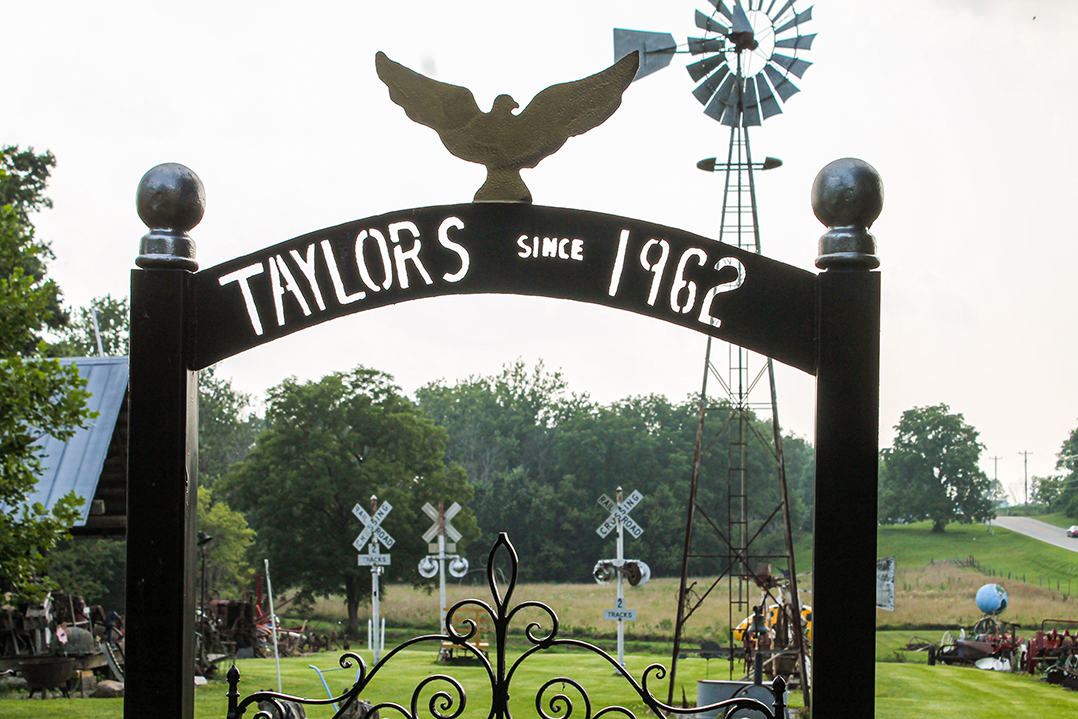 Ernie Taylor has made original art pieces at his property, where he moved with his wife in 1962.

Taylor doesn’t sell the art. He said selling something implies work, and he no longer works. At most, he might give a piece or two away, likely to family who ask him for pieces. But working more isn’t why the Taylors started making art.

Taylor and his wife didn’t travel much. He jokingly said she was “a nervous wreck,” always worrying about potential dangers, which freed up time at the house, so they found other ways to stay busy, chief among them creating their own art.

“We didn’t plan any of this,” Taylor said. “We just got to doing this, and here it is.”

His art is his passion, and he aims to keep it that way while discovering new ones as well. At 72, Taylor learned to play the guitar and ukulele and has played for 20 years. For him, learning new things and staying passionate about them gives him renewed vigor.

“I think the secret (of life) is that you just don’t give up on it,” Taylor said. “It would be pretty easy for me to sit back in that ol’ chair and do nothing. But you have to stay interested in something.”

Following his surgery, Taylor sits outside in the summer air more often with small crystal windchimes softly adding to the songs he plays on the ukulele, some of which he wrote.

He knocks twice on the wooden ukulele after the last strum. 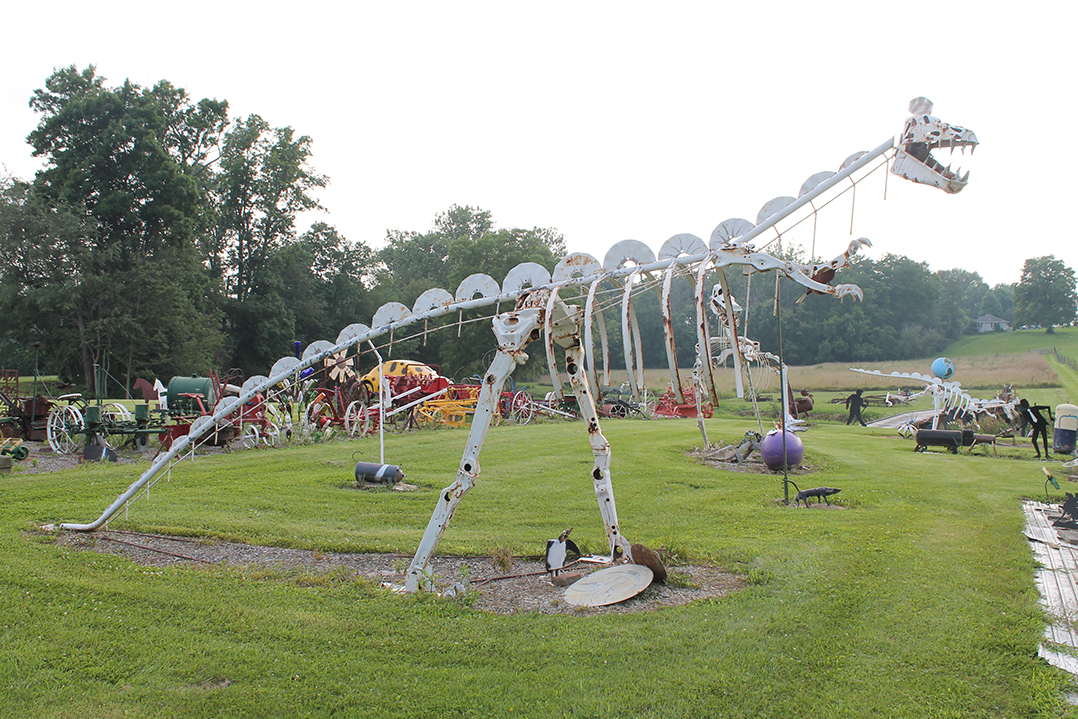 For nearly five years, Ernie Taylor, who lives off Ind. 32, collected parts to build a dinosaur that would tower above the other art pieces on his property.

“I finally decided I had enough to do it,” Taylor said. “Once you get it in your mind, it’s easy enough, but finding the parts to make it out of is the hard part. Most people, when they want to build something, they design it and go out and buy what they need. I do it in reverse. I look in the junk pile and see what I got and make something out of that.”

He estimates the dinosaurs in his field are each worth thousands of cheeseburgers.

“I think Ernie is satisfied just being Ernie,” said Chuck Gowen, a friend who lives in Carmel. “He refuses to quit in life. He thinks he has to be out there every day, doing something that’s productive. He don’t give up. He’s not giving up and sitting on the sidelines and letting life pass you by.”