You are at:Home»Current in Carmel»Carmel Community»Athlete of the Week: Mercer hopes summer success provides springboard 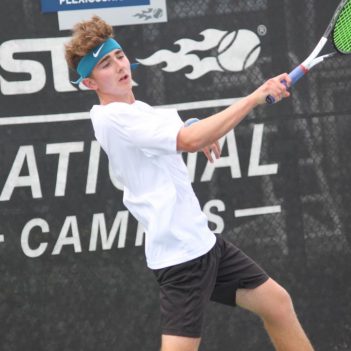 Eli Mercer was unbeaten at No. 2 singles for Carmel High School as a junior. (Courtesy of Eli Mercer)

Mercer joined 2021 CHS graduate Jones McNamar and four other friends on a boys and girls team that won the World Team Tennis national title for 18 and under in Orlando at the United States Tennis Association campus. The Central Indiana team beat a California team in the final.

“It was special because we’ve all known each other since we were in second or third grade,” Mercer said. “We’ve played the same competition the last three years, and to finally make it to the top is really nice.

In June, Mercer won the Central Indiana 18 and under boys singles title and advanced to the Midwest Section tournament.

“He is a very hard worker and has really showed great improvement the last four years,” Hanan said. “He puts the work in during the offseason and plays in a lot of tournaments, and that’s the reason for his success.”

“He also was the clinching point in the state finals and was the reason we won the state championship last year,” Hanan said.

Mercer’s three-set win was the difference in a 3-2 victory over North Central in the state final.

Senior Broc Fletcher was the No. 1 singles player last season.

“I think it will be interesting to see Eli and Broc battle it out for the top spot,” Hanan said. “I think competition is a great thing and both those guys will be able to push one another to get better this year. They are both really good friends and great competitors, but when it’s all said and done, whoever plays one singles they will still be the other one’s biggest cheerleader because just that’s how they both are. They are just great kids that come from great families.”

Mercer said his conditioning has improved since last season.

“I’m more fit and I’ve just grown a little bit,” he said. “My serve has gotten better. I’m just trying to play smarter tennis. I’ve got smarter on the court from practicing with a lot of good players.”

Mercer said he expects the Greyhounds to contend for another state title.

“We still have four really good players returning and we have some good freshmen and sophomores,” he said. “I’m feeling confident we can get a sixth one in a row.”