“He was very close to our family,” Subrin said. “To me, he was a hero. With COVID, everyone is having a hard time with everyday life and mental health is a big deal. We just didn’t recognize some of the issues (Wilson) was having. But he was a tremendous human being. He lit up a room everywhere he went. I felt he was a hero that should be honored. It shook our world for sure.”

Wilson, a Cathedral High School graduate, took his own life at age 24 in 2019. Wilson went to high school with Subrin’s children and was a close friend of Subrin’s son Jake.

In the mural, a bird flies above.

“When we see a cardinal, (Wilson) is with us,” Subrin said.

The mural is on the north side of Drs. Lauck & McLean Optometry Eyewear building, 301 1st St. SW. Subrin, an optician, has a private practice for optometry. 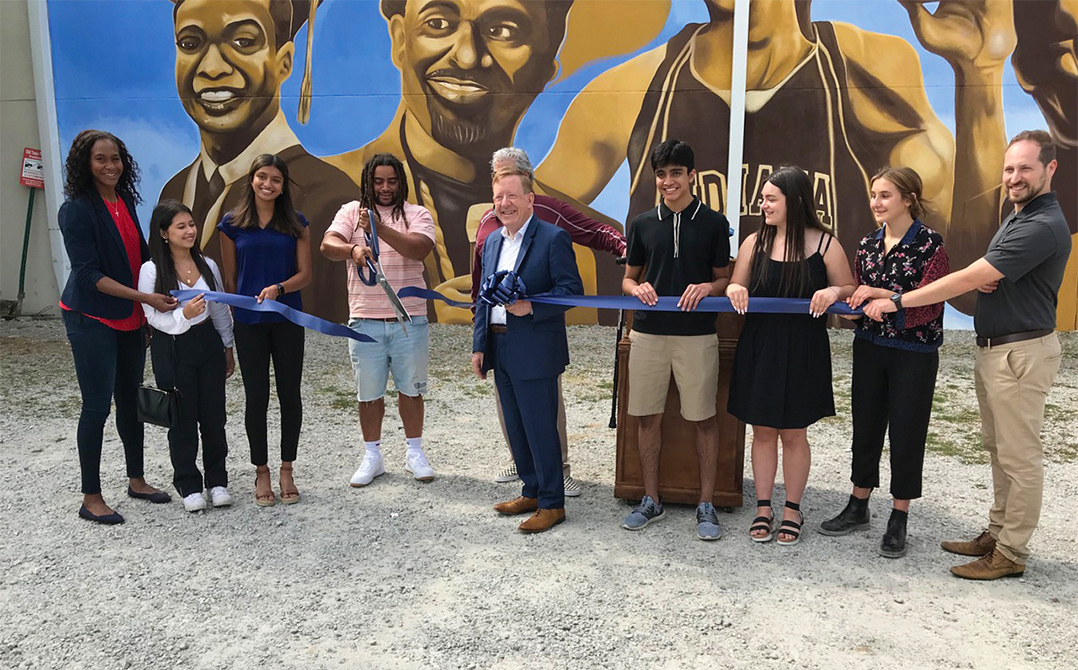 A ribbon-cutting ceremony was held Aug. 6 for the mural. (Photo by Mark Ambrogi)

The students who brought the project to the City of Carmel included Lily McAndrews, Izza Khurram and Adell Urtel, along with Camila Carrillo and Dariush Khurram, who formed the group Be the Change Indy to raise awareness about social justice issues both globally and locally.

“They want to promote progression and change,” Solomon said. “They wanted to create a mural that would celebrate Black culture completed by a Black artist. That’s where I came in.”

Solomon said the heroes “were selected through a concerted effort and brainstorm with Be the Change Indy, the City of Carmel and myself. I was thinking of people I could portray (who) come from Indiana or came to Indiana who have made a huge impact.”

Solomon said he was glad to include Wilson.

“Hopefully, it helps out his family and friends with him being portrayed on the mural,” Solomon said.

Solomon started working on the mural in June.

“I enjoy painting, creating and doing artwork,” Solomon said. “It was definitely time consuming, but I enjoyed the process throughout the time of the mural. I found photos of the people represented in the mural. I’ve met Tamika Catchings a couple of times.”

Previously a middle school art teacher at Kipp Indy, a charter school, Solomon has transitioned to working as a full-time artist.

“I still want to teach and do things in Indianapolis as an educator,” he said.

Catchings said it was the first time seeing the mural in person.

“To be among such an amazing group, and for Israel and the group to think of me, is truly an honor,” Catchings said. “We got a group of youngsters that are dedicated to making a difference, dedicated to seeing the future and being able to honor Black Hoosiers.