You are at:Home»Current in Noblesville»Noblesville Cover Stories»Profile in courage: Noblesville seventh grader returns to school after accident that caused third-degree burns on 93 percent of her body

Noblesville East Middle School may look familiar to 12-year-old Natalie Zofkie, but her life is drastically different than when she attended last fall.

Natalie, now a seventh grader, was the victim of a horrific fire pit accident that caused third-degree burns on 93 percent of her body in October 2020. She hadn’t taken classes at the school since the accident until she returned to campus Aug. 2.

In October 2020, Natalie and one of her friends, an 11-year-old boy, were watching a “Harry Potter” movie and wanted to make s’mores. The then 11-year-olds started a fire outside and Natalie’s friend began to pour gasoline on the fire to ignite the flames, but the gasoline can was empty. When Natalie attempted to toss the can over the fire pit, the fumes caught fire and exploded. Natalie was severely burned. Her friend was unscathed other than melted shoes. After the incident, doctors expected Natalie wouldn’t survive the night, but after spending five months in the hospital –with many months still to go with physical therapy — she is back home.

The only part of Natalie’s body that was unburned was her face and scalp, which were protected by her thick curly hair.

When Natalie’s mother, Sarah Zofkie, rushed to the Riley Hospital for Children emergency room, Natalie was coherent and talking to her mother.

“She looked perfectly normal,” Sarah said. “She looked like she had a sunburn. But when you’re burned like that, you continue to burn from the inside out.”

Doctors took Natalie into surgery to perform an escharotomy to relieve pressure in her skin while Sarah called her family and alerted them of the accident. Natalie wouldn’t leave the hospital until March 2021.

What followed the surgery was a grueling recovery. Since the accident, Natalie has received more than a dozen surgeries and countless hours of physical therapy. She began a skin-grafting process in November 2020. Doctors first used cadaver skin, which fused with Natalie’s body and provided an extra layer to merge with a future skin graft. Doctors then harvested skin from Natalie’s scalp, sent it to a lab in Boston that stretched the skin and returned it. Doctors then grafted it onto her body. Her last skin graft was in April.

“Being on fire isn’t even the worst part of a burn recovery,” Natalie said. “It’s the recovery after that is really bad. I was conscious the whole time (while on fire).”

Natalie said the worst part of her recovery was the dressing changes and the physical therapy at the beginning, but now she likes physical therapy, which she attends five days a week. Some of her sessions are at Riverview Hospital and some are at Riley Hospital for Children.

“I like it now,” she said. “We’re working on my arms and neck, so we stretch out my neck and do desensitizing rubs and massages. I climb a ladder, play volleyball and I do quadruped – hands and knees – and play games.”

Prior to the accident, Natalie loved swimming and competed in gymnastics.

“I liked hanging out with my friends, just normal stuff like that,” she said.

When her skin grafts are completely healed, which will likely be January 2022 for her legs and April 2022 for her chest, she can remove the compression garments she wears and return to gymnastics, but she doesn’t think she’ll regain her love of swimming. When she was in the hospital, her dressing changes were done while she was immersed in water to keep the burns clean, and Natalie said that was the most painful part of recovery.

Natalie said she’s nervous about returning to school. Sarah posted on the Noblesville Chatter Facebook page asking for Noblesville middle schoolers to please be kind to her daughter upon her return to campus. The post was liked more than 1,700 times, shared more than 200 times and received nearly 200 comments.

“I’m nervous because I used to be a very confident person with my body and stuff, and now my posture is all weird because of my scars,” Natalie said. “It’s itchy, and my wounds drain, and I’m very uncomfortable all the time. I guess I’m excited to go back to see my friends and get back into society.”

Natalie said her friends have been incredibly supportive during her recovery and they still hang out. She’s still friends with the boy who was present during the accident.

Natalie said above all, she just doesn’t want to be ignored.

“I do want people to ask questions,” Natalie said. “One thing people do say to me a lot is, ‘You’re an inspiration’ and stuff like that, which I appreciate, but it does get annoying. Please don’t stare at me. If you have a question to ask, just ask me a question. I do consider my life as not really fun, but I’m not having a bad time. I wish I still had my loose skin and I wish I could go to gymnastics, but I’m just trying to make the most of it.”

When she grows up, Natalie wants to be either an Army surgeon or a burn therapist. 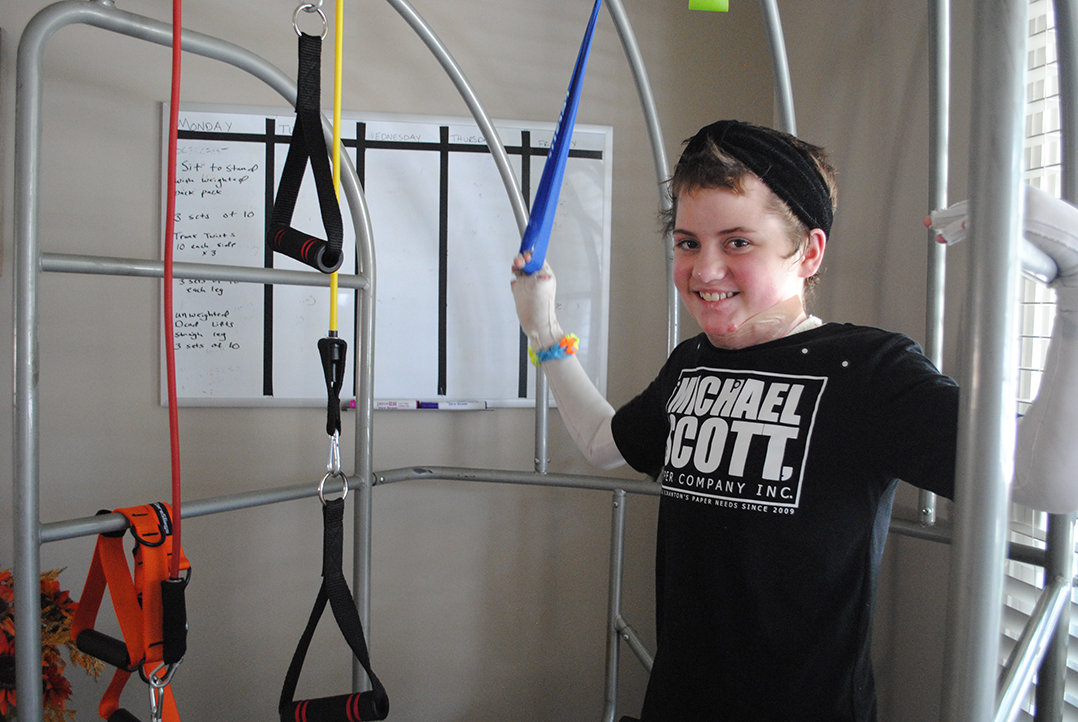 Last book she read: “Worth fighting for” by Dana Vulin, a burn survivor

Favorite things to do: Physical therapy, going to the movies, going to Dave & Buster’s, hanging out with friends, going out to eat