You are at:Home»Current in Carmel»Carmel Community»Shooting fore! a picture book

Zach Dobson strictly adheres to the golf commandment, “Leave the ball where it lies.” Or at least, that’s what he did when shooting photographs for his recently self-published book, “As It Lies,” a pictorial collection of lost golf balls that players never bothered to retrieve from woods and creeks. 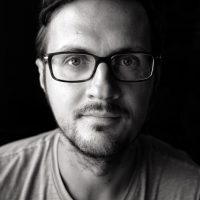 A Carmel-based documentary and commercial photographer, Dobson – who does not play golf — got the idea for the book after accompanying his 9-year-old daughter to Brookshire Golf Club in Carmel, where she wanted to search for golf balls with her older brother.

“I planned to take some photos of the kids exploring and playing in the creek, but I soon found some interesting compositions with the lost golf balls,” Dobson said. “They landed among reeds or were illuminated by a sunbeam penetrating the (tree) canopy. Underneath the water, they appeared to shift in shape with the ripples on the surface and take on an impressionistic quality with the water’s reflections.”

In that moment, he shifted his attention from photographing his children to shooting golf balls exactly as he found them.

“At first, I was attracted to the beauty of the scenes,” Dobson said. “However, after seeing the resulting images and reflecting on them, some deeper themes emerged. Whether in sports, business, relationships or creative endeavors, we all know the feeling of taking a big shot and shanking it into the woods. It’s so off-course that it’s not even worth the effort to pursue it.

“I like the idea of taking someone’s missed shot and making something beautiful out of it. I hope that means the things we try and fail at can lead to inspiration and success for others.”

Dobson, 39, shot all 47 photos for the 46-page book at Brookshire Golf Club. He shot during different times of the year around five different holes.

“As It Lies” is Dobson’s first book. It is available for purchase at shop.zachdobson.com.