You are at:Home»Current in Carmel»Carmel Business Local»The Great Frame Up in Carmel under new ownership

For Tony McGuire, downtown Carmel is the perfect location for his second picture framing shop.

“We’ve always loved the building and the location,” McGuire said. “The shop has its own unique feel that’s very comfortable for everyone who stops in.” 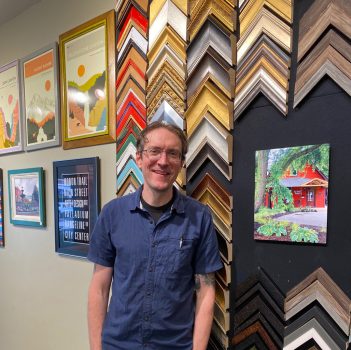 McGuire said it’s great to be a part of the city’s history. The building was originally built in 1890 as the first doctor’s office in Carmel for Dr. L.S. Campbell. It was relocated to the current site in 1921. Dr. J.T. McShane purchased the home and later sold it to Dr. K.C. Hershey, one of the oldest practicing physicians in Hamilton County. Hershey, who was also the Hamilton County coroner at the time, was the last physician to use the house as a medical office.

The McGuires purchased The Great Frame Up from Dawn and Mark Fraley, who owned it for 22 years.

Dawn Fraley, who has been framing for 34 years, started working at The Great Frame Up on the north side of Indianapolis when she was 16.

“The timing was just right to sell,” Dawn Fraley said. “My husband works in Chicago and we would like to live in the same city again. The (COVID-19 pandemic) helped me to realize that I was ready to make the leap of selling and moving to Chicago.”

Dawn Fraley said she plans to move from Carmel later this year. Mark has worked in Chicago for 10 years in the commuter marriage.

The McGuires also own The Great Frame Up in downtown Indianapolis.

“I managed that location for a number of years before taking over ownership about five years ago,” Tony said. “My wife, Paige, and I see it is a family business. We’re hopeful that our son can join us in the shop one day as well.”

The couple, who live in Indianapolis, have a 2-year-old son, Ellis.

“It really could not have gone any smoother,” Tony said of the transition. “Dawn and I approach managing a business in very similar ways, and the team that she has put together here could not be any better.”

The Great Frame Up has been in its present location since 2007. In 1990, Bruce and Scott Westphal opened a new Great Frame Up store in Village Park Plaza on Greyhound Pass.

“I was asked to set up and manage that store,” Dawn said. “Eight years later we purchased that store from them. We purchased the property where the store is currently located in 2005 and moved the store to that location in February 2007.”