During the course of 18 months, Charlie Kingery went from living his childhood dream of being a police officer to fronting a nationally touring comedy troupe and starting his own clothing line. The journey has been swift and no doubt surreal for Kingery, who once tased a man dressed up as Santa Claus on Christmas morning.

“I get a call, a car crash was just around the corner, so we got there pretty quick,” Kingery said. “As soon as we roll up on-scene, a guy in a Santa Claus outfit pops out of the door of a car. He had to be coming from a party of something and takes off running. I thought, ‘There’s no way this is happening.’ So I yelled, ‘Stop, Saint Nick.’ And he didn’t.

“I have to be one of the only people in the world to have tased Santa Claus on Christmas morning.”

Kingery has been a Fishers resident since he married his wife, Christine, 10 years ago. The couple have two children: Landon, 8, and Audra, 5. He grew up in Beech Grove and played baseball at Franklin College.

Kingery’s interest in becoming a police officer was sparked by an uncle who was an undercover detective with the Indianapolis Metropolitan Police Dept.

“I did some ride-alongs with him and fell in love with it,” Kingery said. “Day to day, the job was never the same. You never knew what you were going to get. I enjoy being able to help people in some of their worst moments. That’s always been pretty big for me.”

He might have remained a full-time officer had the television show “Live PD” not shadowed the officers in Lawrence.

“Live PD” was a reality docuseries on the A&E Network that ran from 2016 to 2020. Camera crews would tag along with police officers on patrol on a nightly basis and broadcast events during the evening in near-real time, with about a 10- or 15 minute delay.

The LPD was part of the show for Season 3 and 4. From his very first appearance on “Live PD,” Kingery was a magnet for attention, even though his first appearance did not go over well on various social media platforms.

Kingery was conducting a traffic stop during which the man he pulled over had, according to Kingery, a “small amount” of marijuana in a bag. Kingery gave him a warning and had him empty the bag on the side of the road and stomp the contents into the ground. What riled up Twitter was that Kingery unwittingly littered.

Beyond the rocky start, Kingery enjoyed having the production crew shadow him most nights. He said his children enjoyed watching him at work, and his fellow officers enjoyed seeing the episodes. They’d go back to the station and watch a rerun of the episode that earlier in the evening they had helped film.

The cameras also caught other aspects of Kingery – such as the fact he likes to dance in uniform.

“I’ve never been a shy person when it comes to making people laugh and entertain them,” Kingery said.

Kingery has been dancing since he was a young boy. He would watch clips of Michael Jackson and Chris Brown dance, then practice until he had the same steps committed to memory. He danced in the talent show when he attended Beech Grove High School and dances in the kitchen with his wife and kids.

“The show offered me a platform to show a different side to what law enforcement is,” Kingery said. “I was the very first officer (that a lot of people saw) that was out there dancing in uniform. Cops show their more down-to-earth-side every day. I was just lucky to get a platform that allowed me to show myself and not be afraid to show myself.”

Clips of him dancing on the show became so popular that he created a TikTok page in February 2020. As of Sept. 7, he has 2.4 million followers. He began making humorous reaction videos of other people’s clips.

His exploits caught the eye of other law enforcement officers across the U.S., like Kevin Eudy, who for the last decade has worked in law enforcement in Charlotte, N.C., who was also trying to use social media to show a different side of police work.

“We’re not just robots who are walking around in uniform,” Eudy said. “We have a fun side. We can laugh, we can dance, we show emotion.”

Eudy and Kingery connected to make a podcast, and in the winter of 2020-21, an opportunity presented itself to create a larger group and take their show on the road. 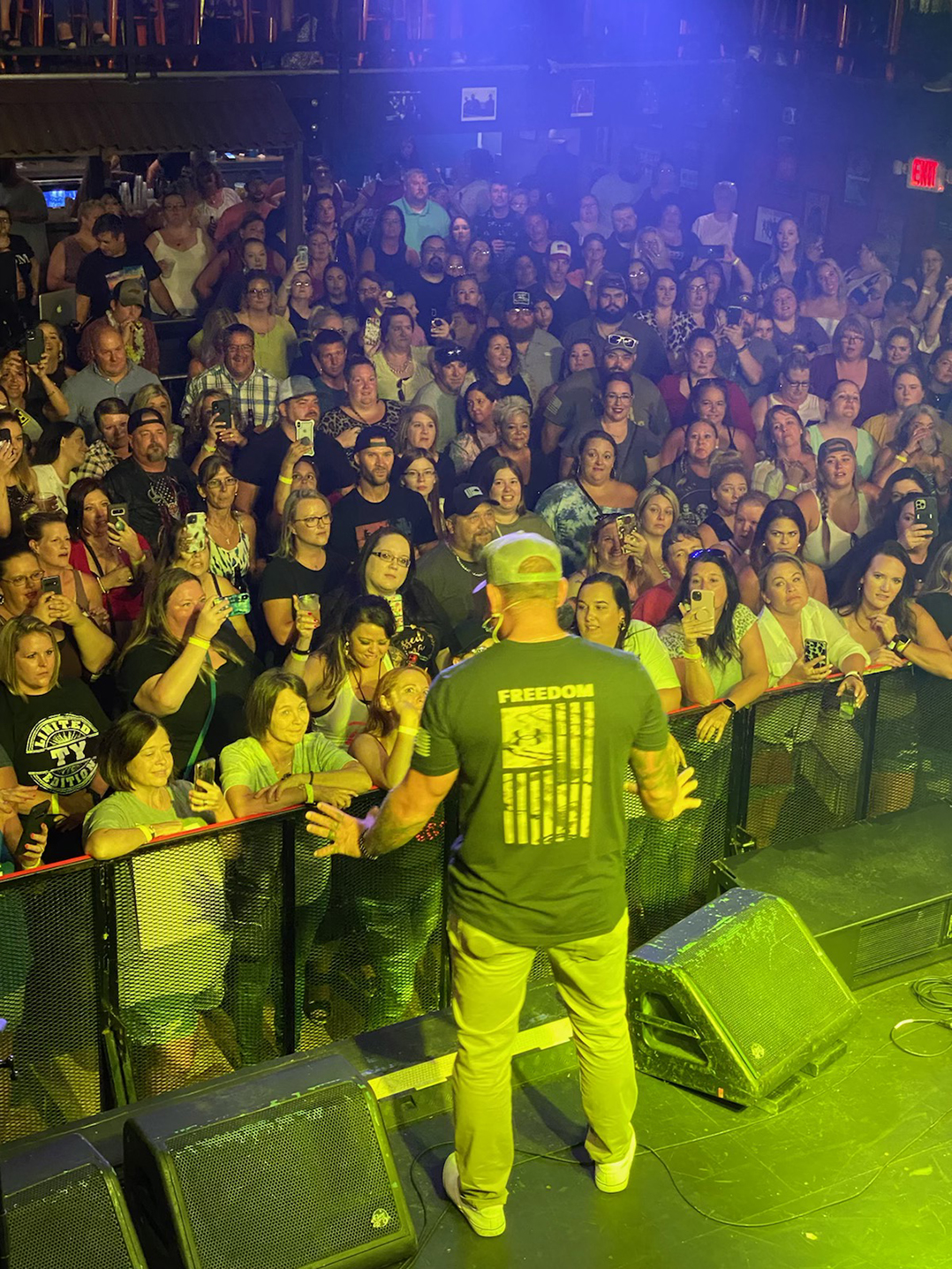 The venues where Content Violation performs are typically larger bars that can hold crowds of around 500 people. (Photo courtesy of Charlie Kingery)

Since April, Kingery has been touring the U.S. with a comedic/musical troupe called Content Violation, performing mostly in bars that have a music stage. They will be at the Rockstar Lounge in Ft. Wayne on Sept. 25.

“A bunch of us met up in November (2020) and we called ourselves the Ride Along crew for a little while, but we became Content Violation because we speak on real topics,” Eudy said. “We don’t hold back, and we don’t waver on who we are, and a lot of our videos got reported (on social media) and (some) people don’t like that and would rather us sugarcoat things, so we named our group after the label we kept getting on social media,” Eudy said.

Kingery said their comedy is very real, profane, patriotic and, at times, raw. The troupe is made up a of eight men. Some are police officers and some work in farming. They pray at the end of their shows with the crowd. During shows they play music, perform skits and tell jokes and stories.

“It’s three or four hours of leaving everything that’s going on in the world outside the doors and coming in and having a good time,” Kingery said.

Taking stock of the surreal last year and a half, Kingery embraces the unexpected ride he’s on.

“The reason I stepped out to do this was because I didn’t want to look back in 10 or 15 years and wonder, what if I didn’t take this chance and pursue it?” Kingery said. “I could have just been a cop. I love being a cop, but you only get opportunities like this in your life every so often, if ever. And you never know what can become of it.”

“It’s a company that is everything that I stand for. You know, the underpaid and underappreciated hard workers in our country,” Kingery said.

The idea for the company was formed in late 2020 and was launched in April.

Each month, the company donates a portion of its proceeds to a different charity or organization that resonates with Kingery. The firm has supported a farm that was struggling in Virginia and a family of a fallen police officer.