“I’ve made the most improvement in my mental game by far,” Weber said. “I’m learning to let plays roll off me and have next-ball mentality and to not dwell on a point I could’ve done something better.” 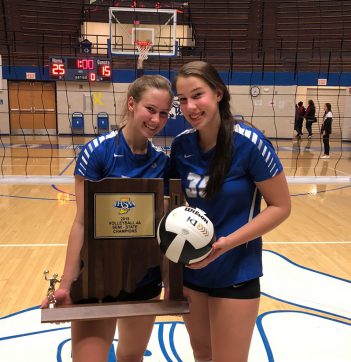 Hamilton Southeastern coach Jason Young said Weber has been an excellent leader for the team.

“She has the experience of a state (finals) run under her belt and shares that wisdom with her current teammates,” Young said. “She is a terrific player and a better person.”

The Royals reached the Class 4A state championship match in 2019 before losing to New Castle, 3-1.

“Going to state sophomore year definitely made me more hungry to get back,” Weber said. “The adrenaline you get from being on that court with a whole community behind you is something I want again. This time, though, I want the blue ring.”

Weber was on the 2019 team with her sister, Abby, who was then a senior and now plays outside hitter for the University of Southern Indiana.

“Abby was a huge part in my involvement in the game,” Weber said. “She was the first to play, and watching her fall in love with the game made me want to try it and see what it was truly about.”

Weber played softball as well as basketball growing up.

“Those were the sports my siblings played and being on the basketball court or softball field was natural for me,” Weber said. “I began to focus on volleyball in seventh grade, though. I decided that it was my passion and I wanted to see how much potential I really had to play at a higher level each season.”

“It was always in the back of my mind and a goal I wanted to reach for myself, but the improvement and making my teammates better and giving them the best possible ball was, and is, definitely more important to me,” she said.

Weber committed to play volleyball for Wright State in Dayton, Ohio in December 2020.

“Wright State felt like home to me, and after talking to the coaches for months and meeting the girls, I knew that I belonged there,” Weber said. “It is my home-away-from-home. I recently met the other recruits in my class and being around them and the team solidifies that I made the best decision becoming a Raider.”