You are at:Home»Current in Fishers»Fishers Community»Fishers council disagrees on proposed ordinance outlining process for board, committee appointments 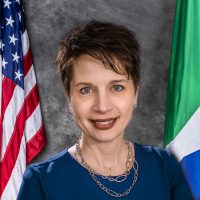 Fishers City Council member Jocelyn Vare first brought up her concerns about the lack of diversity on city boards and committees at a January council meeting earlier this year. After an ordinance addressing her concerns was presented to the council at the Oct. 11 meeting, Vare still wasn’t satisfied with the changes.

The proposed ordinance states that councilors can request to appoint a new member to one of the city’s boards and commissions and the request would then be approved by the council president. For past appointments, the selection process took place each January. A recommended roster of appointees’ names was prepared and voted on as part of the council’s consent agenda.

Despite sitting on the committee task force, Neumann said she still hoped for revisions to the ordinance.

“This gives a new unchecked authority for the council president to appoint members. What I think would be a better solution to this is to have an open council vote to the public or something along those lines for the selection process,” Neumann said. “I do hope we can still make some improvements to this.”

Vare said the ordinance worsened transparency since it eliminated the other council members from reviewing the appointment and then voting on it.

“I’m going to speak from the heart,” Vare said. “Many months ago, I shared with the council my concern. My concern at that point was about citizen appointments from this body to boards and commissions, and my concern was two-fold and proven. One was a lack of transparency and the second was a lack of thoughtfulness of representation of diversity of our committees.

“What is proposed here keeps it behind closed doors and gives responsibility to one person. I feel very strongly this is not at all helpful to our community and it does nothing for transparency. It does nothing for encouraging our citizens to want to participate.”

Stoller said she thought the ordinance was good for Fishers.

“I think this (ordinance) moves us forward and helps us with operating procedures for the type of city we have,” she said. “I’m going to promote the diversity within the community. I feel we are a very diverse community, and we do need that representation.”

Council member Pete Peterson agreed with Vare and Neumann and said he thought board and commission appointments should be voted on by the entire council.

“I think this (ordinance) should be completely wiped out and tabled forever,” Peterson said. “There’s no reason to stop what’s working now and insert something nonsensical from the very start.”

“I am confident as we move forward, we are going to look for the best people to serve in those positions, people that provide diversity but also are qualified,” Coble said. “I do feel confident in the process, and any one of us can always make recommendations and provide resumes.”

Since the proposal was a first reading, the council did not vote or table it. Instead, Vare recommended the committee task force meet again in person and come to a better solution. The proposal will return before the council at a future meeting.