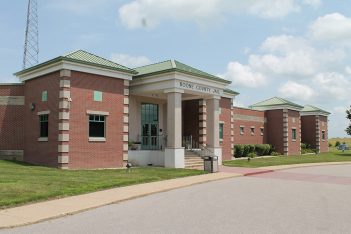 The Boone County Council has named members of its newly formed Boone County Justice Commission, which has been tasked with continuing to determine the need and scope of a proposed justice center project.

The commission will meet once a month to discuss the proposed project. A small group of commission members will serve on the executive committee, which will lead work study groups. The work study groups will be formed to investigate the following areas, which are proposed to be expanded or relocated under the justice center project:

Once the commission has concluded their investigative meetings, a report containing its recommendations will be presented to the Boone County Council.

The proposed justice center project would see an expansion of the Boone County Jail to include more beds along with more room for county departments and increased services for inmates to reduce recidivism rates. The project is expected to cost between $45 million and $50 million.

But the project is facing a deadline, Boone County Commissioners and Boone County Sheriff Mike Nielsen say. Because of the COVID-19 pandemic, the Federal Reserve has kept interest rates low in an effort to stimulate economic growth. However, the commissioners, Nielsen and others believe the Federal Reserve will increase interest rates in the near future, now that unemployment rates have stabilized to 4.8 percent, down from 14.7 percent in April 2020, according to the U.S. Bureau of Labor Statistics, and economic growth has returned.

County commissioners say the county will pay millions more over the life of the bond used to pay for the project because of the expected increase in interest rates if the council does not approve the project by Oct. 31. Otherwise, the project can not be approved until well into next year because of regulations, the commissioners say. Santelli estimated it could cost $24 million to $30 million more over the next 20 years. But council members argue interest rates might not increase by that much.

The commissioners and Nielsen say they have worked to establish the need of the project for years, citing a recent jail feasibility study that recommends the county jail add more than 100 beds to meet the needs of the growing county. The commissioners have proposed the bond be paid for by a local income tax increase, of which all revenues would be funneled to the justice center project.

But most council members believe there is more work to be done before the project can be approved.

“The council takes seriously our constitutional oath to be the best fiduciary custodians for the residents of Boone County,” Councilor Aaron Williams stated in an email. “Indiana State statute clearly articulates our responsibility to investigate the need of the proposed structure. An investigation for a proposed $50 million project by the board of commissioners, of which they want taxpayers to cover the entire cost, is something the council believes should not be rushed. We are committed to completing a thorough and informative investigation in a timely manner.”

Santelli, however, said the council is purposefully extending the project past the Oct. 31 deadline in an effort to delay the tax increase and win reelection campaigns next year.

“It’s strictly an election issue,” Santelli said. “They recognize we are going to have to pass a bond at some point in time, but, from my perspective, you can not put your political aspirations in front of the needs of the community.”

Williams, a co-chair of the Boone County Justice Commission, disagrees with Santelli’s claim.

“The commission and council will not be pressured by baseless political assumptions from the outgoing sheriff and current commissioner to appease their personal wishes,” Williams said.