You are at:Home»Current in Carmel»Carmel Community»Athlete of the Week: Emily Roper shows versatility in leading the Carmel girls soccer team to success

“I’ve made a lot of improvements with my leadership,” said Roper, calling 2021 her best season. “This year I’ve had a lot of composure up front being able to finish balls in the attacking third (opponent’s goal area). I think that one of the things I’ve improved most is getting my goals up as well as being diverse and being able to switch positions.”

Prior to the Oct. 23 Class 3A semistate against Bloomington South, Roper had 18 goals and nine assists for the Greyhounds (17-2-2) 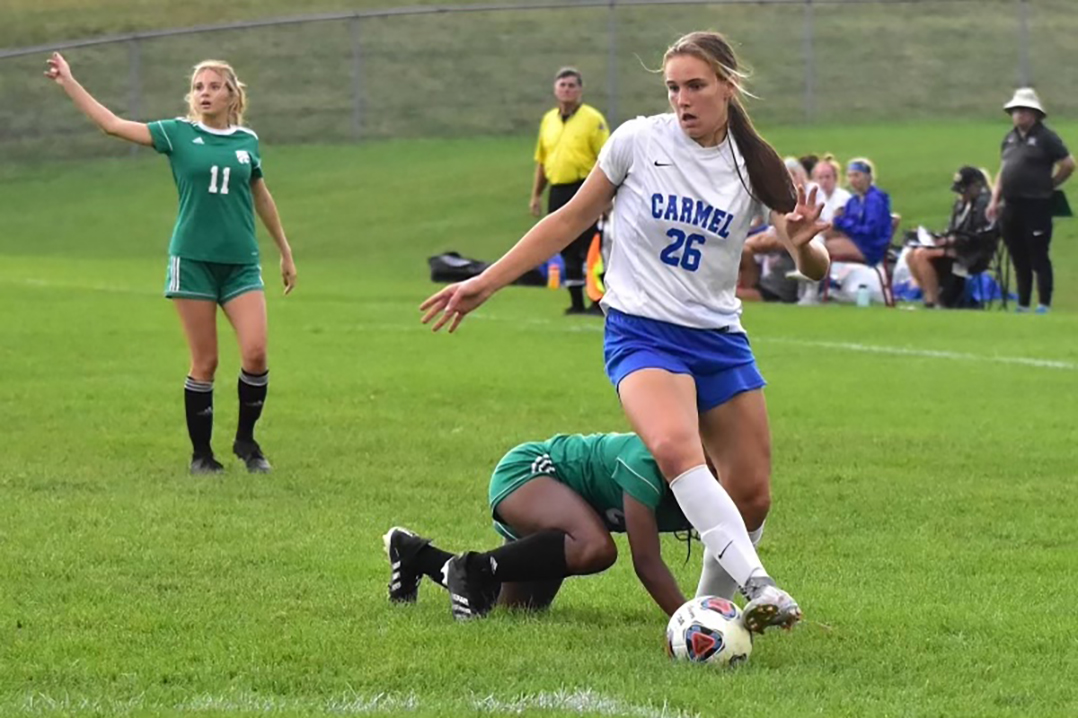 Roper, who has committed to play soccer for Ball State University, had seven goals as a junior in 12 games. She had to sit out a few games because of having a close contact to a student who tested positive for COVID-19.

Roper had six goals as a sophomore and seven as a freshman.”

Before this sectional, Roper moved from center forward to center back because the starting center back, Claire Simmons, suffered an injury.

“I’ve had a lot of help from the other center backs on our team, telling me where to go,” Roper said. “The center back is more defensive and never goes forward. A center forward is all the time attacking. You never go back.”

“We had a backup center back, but she is young,” Dixon said. “I wanted someone with experience to go back there, and Emily is a great athlete. So, I asked her to do it and she said she would. I think when she goes to Ball State, they may play her as a forward, but they could play her anywhere on the field. She could play center back for them if they wanted her to.”

With Roper moving to defense, Dixon said the Greyhounds have struggled to score goals but did not give up a goal in three sectional and two regional games.

“I think we’re not giving up any goals because she is there and we’re finding enough (goals) to find our way through,” Dixon said.

Simmons returned to practice before the semistate.

Roper is one of the three team captains.

“It’s been a really good group,” Roper said. “Everyone has bonded well. Even the people that have been brought up from the JV to be on the tournament team, they’ve motivated us to score.”

The Greyhounds were eliminated by Westfield in a shootout in last year’s sectional opener.

“So, I feel like this is our redemption year, and just making it this far, I’m super proud of how far we’ve made it,” Roper said.

“(Basketball) works different muscles and I just love to play basketball,” she said. “Soccer has always been my first love.”