Lawrence Central High School Principal Franklyn Bush is glad to have Mosi Barnes on his team.

“Mosi Barnes and I both graduated in ’96 and had a lot of great competitive battles on the basketball court,” Bush said. “Beyond his grit and hard work, Mosi was always humble and displayed great leadership in our high school years. Getting the opportunity to watch him over the years in other roles, I was impressed with his determination, presence and commitment to his school community.”

“In the short time Mr. Barnes has been at Lawrence Central, we have an increased level of excitement from our students, staff and community due to his genuine interest and engagement,” Bush said. “I see his strengths as being creative, having a deep vision for program and player development, along with a competitive edge of wanting to be excellent at everything we do.”

Barnes, who played basketball for Purdue University and Eastern Michigan, enjoyed his time at Tech. However, the Lawrence Central opportunity was too good to pass up. 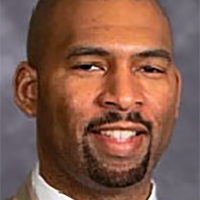 “With Principal Bush being here, I know he’s done a phenomenal job in Lawrence Central. I thought it would be a great fit,” Barnes said. “He has a clear vision of what the school is trying to do. It was a chance for me to be a part of something special.”

Barnes, 43, coached basketball for four years at Northwest High School and four years at Howe. Under Barnes, Howe reached the Class 2A state championship game before losing to Lapel. Barnes then served in a dual role of head basketball coach and athletic director for one year at Tech before devoting full time to the AD role.

“I thought it was important for me to coach my first year while being athletic director there. It would give me a direct idea of being a coach in the athletic department,” he said. “That would give me some tangible things I could work on to try to improve in the department.”

Although Tech and Lawrence Central are Class 6A football schools, Barnes said the participation level is higher at Lawrence Central in some boys and girls sports, such as golf, tennis and swimming, than it is at Tech.

“There are challenges in education in general,” Barnes said. “There are no immediate obstacles or challenges LC faces that other schools don’t. My personal challenges are just getting adjusted to a new role, especially coming in around the end of August when fall sports were already started. I’m listening to the people I work around. I have a great group of people and great team that I depend on. They brief me and counsel me every day. I’m just really a sponge and learning as much as I can.

“I’m trying to develop this program. It doesn’t have a ceiling. I feel like the potential is limitless.”

Barnes said the ultimate goal is to win championships and to build student/athletes who are upstanding citizens and exceptional role models.

“We just want to build a culture of winning,” he said. “We want to win in all of our sports programs. If we don’t do that, get on the horse, and figure out how to do it again. If we do win, figure out a way to do it again. That’s just the nature of competing. Hopefully, I can try to bring that type of competitive edge and expectations that’s already been here at LC.”

“Even as a coach, I could always rely on my college experience and even my high school experience as well,” Barnes said. “I was just talking to a student in my office and talking to him about competing at the next level (college) and the things he could do to improve his athletic performance. It’s easy for me to relate to a student/athlete in that way. If I’ve had success in this business, it’s about being relatable.

“A lot of our kids wanted to do some things that maybe I’ve accomplished. I can only give some guidance.”

Barnes’ son is carving out his own career as a college athlete in a different sport.

Barnes’ son, Jelaani Davis-Barnes, is a premier triple jumper at the University of Oklahoma. Davis-Barnes moved from northwest Indiana to Houston with his mother and step-father during high school.

“He was a football player and multi-sport athlete,” Barnes said. “He took up track and started doing the triple jump his junior year (in high school). He went from someone no one knew too pretty much overnight being one of the top athletes in the world. He’s a pre-med student. He’s as sharp and focused as any young man can be.”

Barnes and his wife, Kamieka, have two daughters, Karis, a sixth-grader, and Kamille, a second-grader. They attend IPS/Butler Lab School 60.