Members of the Westfield community heard from local legislators and CannaMedU organizers during a Nov. 11 roundtable event at Your CBD Store in Westfield.

“It really means a lot that we have people showing up and advocating on an issue that potentially has some stigma attached,” Trapp said. “We are trying to get more people to come and join us and make it a talking circle as opposed to a town hall. We want to take the politics out of it. Even if you’re opposed, we want to hear about it and we want to know why.”

Beuke Diers said CannaMedU organizers decided to work directly with legislators this year. The majority of the people who attended the roundtable support legalizing medical cannabis.

Taylor said the event was the first time he had ever visited a CBD store. CBD and THC are cannabinoids found in the cannabis plant, but THC will cause a person to feel “high” while CBD does not. CBD is legal in Indiana. CBD also is found in the hemp plant.

Taylor said people use cannabis in Indiana, but it is brought in illegally. He said the next step is to legalize cannabis so that the state can decide who can access it.

“Where do we want it to be? Do we want it to be with kids in high school? I don’t,” Taylor said. “Do we want it to be a catalyst for putting people in jail? I don’t. It costs us. The next piece is once you get it here, the piece we are responsible for, how do you regulate it? How do you make sure people who shouldn’t have it don’t get it? There’s a black market out there that’s going to continue to operate until you create a system that says, ‘I can do this legitimately.’”

Taylor said regulating medical cannabis can help keep it out of the hands of people who shouldn’t have it. He also said he doesn’t think Indiana is anywhere near to legalizing recreational cannabis.

“Straightforward, anybody who thinks Indiana is going to jump into adult use, don’t think about it or let it cross your mind,” Taylor said. “I don’t think we’re there yet. I’m just going to be candid and straightforward.” 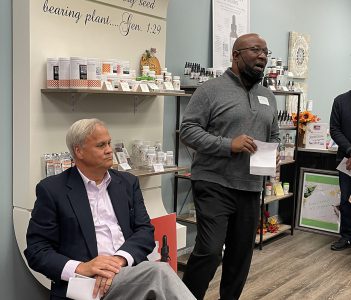 “We have so many great uses for the cannabis plant itself that it would be very productive and very smart for the legislature this next year to lurch forward,” Merritt said.

Merritt, a Republican, and Taylor, a Democrat, agreed that legalizing medical cannabis is a nonpartisan idea. Taylor said legislators might be more open to legalizing cannabis when they learn about the benefits.

“I started out anti-Sunday (alcohol) sales until I was educated on the need and the convenience,” Taylor said. “What we were creating was a black market in itself, and the second piece was people who want alcohol are going to get it, anyway.”

Thirty-seven states have legalized cannabis in some form, whether for medicinal or recreational use.

Merritt said one of the main hurdles of legalizing medical cannabis is the gray area that comes with traffic stops and impaired driving.

“It’s not only (that) the state is slow and conservative, but a lot of prosecutors and law enforcement are worried about the traffic stops,” Merritt said. “Once something comes along, once we figure out the traffic stop with a swab of their saliva and can tell a certain amount of THC in the body, but that’s difficult because THC can stay in the body for a certain time. To be fair to the prosecutors, it makes the water murky. It’s very difficult for them to make a decision and keep people safe.”