You are at:Home»Current in Carmel»Carmel Cover Stories»Bird’s eye view: Redevelopment, road projects, elections on the horizon in 2022

2022 looks to be another busy year of construction projects in Carmel, with several redevelopment projects set to rise from the ground and, of course, more new roundabouts.

The City of Carmel and Carmel Clay Schools will see leadership changes in key positions, and additional change could come at the county and state level with elections in November. 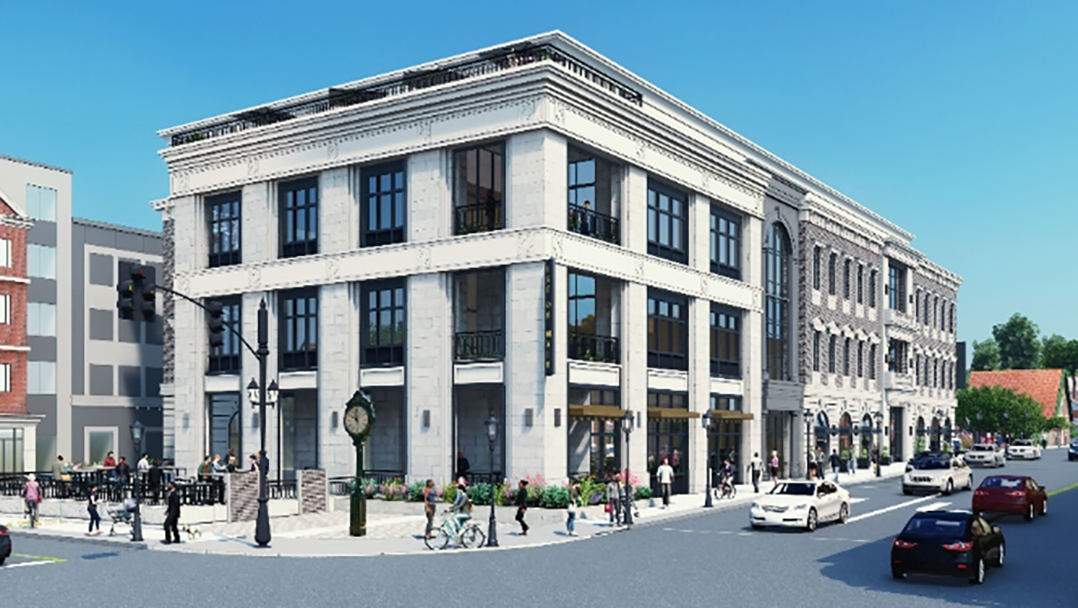 View of the office building from the corner of Range Line Road and Main Street. (Rendering by Architects Forum)

It took a bit longer than originally projected to begin the 1st on Main mixed-use redevelopment on the northeast corner of Main Street and Range Line Road, but construction is under way and will continue through 2022.

The $47 million project isn’t expected to be complete until mid-2023, but next year should see substantial progress, especially on the 310-space parking garage and four-story office building with first-floor restaurant space.

The city will remove the Rotary clock during the project but is working with the same contractor that originally installed it to reinstall it at the end of construction, according to Carmel Redevelopment Commission Director Henry Mestetsky.

“We want to keep it as safe as possible during construction,” he said.

Construction on the condominium portion of the Magnolia redevelopment project on the southeast corner of Range Line Road and City Center Drive began in late 2021. Mestetsky anticipates some of the condos to be complete in 2022.

The 30 condos in six buildings will be east of a multi-family building set to be built where the Mohawk Landing shopping center and its parking lot sits now.

Mestetsky said he does not know when the Mohawk Landing building, which still houses several retail and restaurant tenants, will be demolished, but he said it could happen in late 2022 or sometime in 2023. The city purchased the shopping center in 2017 for $2.8 million, in part to make way for a new roundabout.

The CRC is partnering with Old Town Companies on the project. 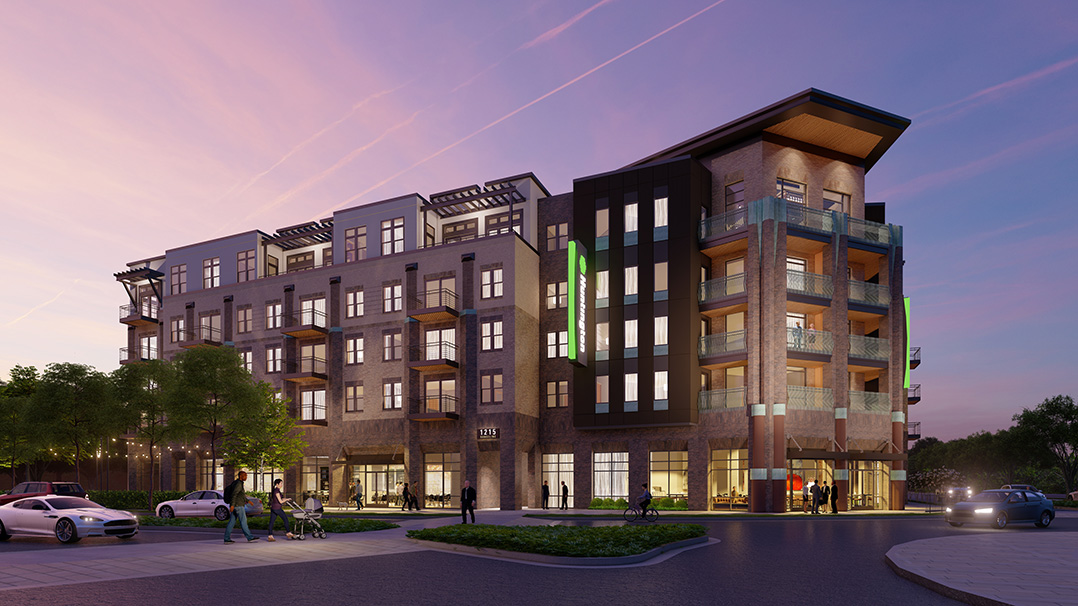 Proscenium II is proposed on the northeast corner of Range Line Road and Carmel Drive. (Rendering courtesy of the City of Carmel)

The Proscenium mixed-use development was originally expected to be complete before 2022, but supply chain disruptions and other issues have led to delays. The $60 million project includes 197 apartments, 22 for-sale condos, office and retail space and a parking garage. Novo Development Group is developing the project with the CRC.

Most portions of the project are complete, with the multi-family units on the west side of the development among elements expected to be finished in 2022. Additional retail and restaurant tenants are likely to be announced in 2022.

The city also is working with Novo on the Proscenium II, which will be built across Range Line Road north of the Kroger grocery store. The first step, demolition of the former Walgreen’s building, is expected in 2022.

“That Walgreens has been a non-Walgreens for a long time,” Mestetsky said. “It’s cool to see this kind of development jump across Range Line but still respect the neighorhood-style development (on that side of the road).”

Proscenium II is planned to include 48 luxury apartments, seven for-sale condos, office and retail space and a 120-spot parking garage.

The city is building a garage in Civic Square just north of the CPD headquarters that will be wrapped with condominiums designed by Onyx + East. The 300-space garage will have solar panels on its roof, electric vehicle charging and a counter that will alert those wanting to enter the garage if space is available.

“It’s going to be our most high-tech garage we’ve ever done in this city,” said Mestetsky, adding that the city is considering retrofitting older garages with some of the new technology.

Construction is expected to begin in early 2022 and be complete midyear.

A project to triple the size of the Japanese garden behind Carmel City Hall is expected to be complete by fall.

Besides expanding the pond to Carmel Drive, upgrades include green space, new structures and an island.

A five-story building to house the Carmel Fire Dept. headquarters, the Survive Alive Village experience for children, community gathering space and a museum is set to be complete in 2022. It was originally set for completion in the fall of 2021, but, like many other projects, was delayed by supply chain issues.

Work will begin in 2022 to expand the CPD headquarters, a project that includes space for city court and many other upgrades.

The City of Carmel announced a partnership with developer Pedcor in 1997 to redevelop 88 acres at Range Line Road and 126th Street, and in 2022 the massive mixed-use project will be nearly complete.

“The last two buildings in City Center, after 20-plus years, are under construction and will be built, which will really surround Carter Green and make it feel very much like a very traditional town center,” Carmel Mayor Jim Brainard said.

Work is under way on the Wren building, and construction of the final building, Windsor, is expected to begin in 2022.

A three-story museum is planned to replace the Carmel Clay Historical Society’s aging archive building at 211 1st St. SW. Architectural plans for the museum are preliminary and subject to change based on available funding. (Rendering courtesy of CCHS)

Construction is expected to begin in 2022 on a three-story Carmel Clay Historical Society museum to replace its aging archive building in a prime spot along the Monon Greenway.

The 15,000-square-foot museum is designed to have space for galleries and exhibits, community meeting space, public restrooms, archives, a gift shop and a rooftop garden that can be rented out for private events. The historic Monon Depot Museum, which served as a train depot from 1883 until 1974, will remain in place to the north of the building.

The Fransciscan Health Orthopedic Center of Excellence at 106th and Illinois streets is set to open in early 2022. The project is a partnership between Forté Sports Medicine and Orthopedics and Franciscan Health and will include a hospital, surgery center, medical office building and parking garage.

Several projects will be under construction in 2022 with anticipated completion dates in 2023. They include the Republic Airways corporate headquarters and training facility at the former Hamilton Crossing retail center at U.S. 31 and Carmel Drive; The Corner, a mixed-use development by Kite Realty being built on the southeast corner of 116th Street and Range Line Road; The Signature, a mixed-use project by Tegethoff Development on the northeast corner of Old Meridian and Main streets; and Mélange, which includes multi-story brownstones and single-level condominiums by Onyx + East at Veterans Way and Monon Green Boulevard.

Work will also continue on the first phase of North End, a project by Old Town Companies on the north side of Smoky Row Road between the Monon Greenway and U.S. 31 that will have apartments, townhomes, condos, single-family homes, retail and office space.

Several elected offices will be on the ballot in 2022, with the primary set for May 3 and Election Day on Nov. 8.

The three seats representing districts on the Carmel Clay Schools board of trustees, currently held by Layla Spanenberg, Jennifer Nelson-Williams and Mike Kerschner, will be on the ballot in the November election. School board candidates do not declare a party or run in a primary.

CHS Principal Tom Harmas will retire at the end of the 2021-22 school year, and CCS is aiming to name his replacement by early April.

2022 is expected to bring some changes at key leadership positions in the City of Carmel and Carmel Clay Schools.

Carmel Police Dept. Chief Jim Barlow has announced he will retire on Jan. 7, 2022. He has served with CPD for 38 years and has been chief for five years. He served as a firearms instructor for more than 30 years and spent 20 years on the SWAT team.

Brainard has appointed Deputy Chief Jeff Horner as the department’s next chief. Horner has 28 years of experience in law enforcement with CPD. He received his bachelor’s degree from Ball State University and is a graduate of the FBI National Academy.

West Park is set to fully reopen in the spring of 2022 with a new playground and splash pad. The $6.2 million project was originally expected to be complete in 2021, but Carmel Clay Parks & Recreation Director Michael Klitzing said delays in obtaining permits slowed the project from the start. Work also has been affected by supply chain issues and labor shortages.

Work to upgrade Meadowlark Park with a new playground and pickleball courts is expected to be complete by Memorial Day.

Inlow Park is receiving an updated and relocated splash pad to be built closer to the existing playground, two pickleball courts, expanded parking and a new restroom building. The $2.3 million project is expected to be complete by spring.

River Heritage Park is set to close in the spring for renovations that include a wheelchair-accessible nature trail, relocated shelter, multigenerational fitness area and updated playground. The park is expected to reopen by the end of the year.

The city is working with Clay Township to improve the Monon Greenway between City Center and Gradle drives, with preliminary construction set to begin in early 2022.

The project will widen the path and add landscaping, stormwater mitigation and parking. Some sections of the trail will be closed during construction.