Juergen Jungbauer has made it his mission to bridge German and American cultures since he emigrated to America in 1963.

Jungbauer, the owner of Heidelberg Haus Café & Bakery at 7625 Pendleton Pike in Lawrence, recently was recognized for his efforts. He received the Federal Republic of Germany German American Friendship Award on the Carmel Christkindlmarkt’s opening day, Nov. 20.

“They think I do such a great job of promoting German-American culture in Indiana for the last 50 years,” Jungbauer said. “But it’s not just me. It’s the store. It’s the atmosphere. It’s the employees. I got (the award), but my wife and daughters who work here and the beautiful salespeople every day convey that happiness to the customers.”

Heidelberg Haus is well-known as a German café serving pastry items and lunch, but it also offers gift items and is a German grocery store.

Jungbauer, 78, said he tries to leave Heidelberg Haus customers with a nice image of Germany.

“They come in the store, and they feel like family,” he said. “It’s just such a neat place. We are actually a destination bakery. We don’t have houses around, but my customers come from hundreds of miles. Some only come once a year.”

Jungbauer often has guests bring exchange students from Germany to the cafe, or German teachers bring their entire classes.

Jungbauer always wanted to be a baker. He started his career in America in 1963 after working as a pastry chef on a cruise ship. While working on the ship, a restaurant owner from New York saw Jungbauer’s work and invited Jungbauer to come work for him in New York. 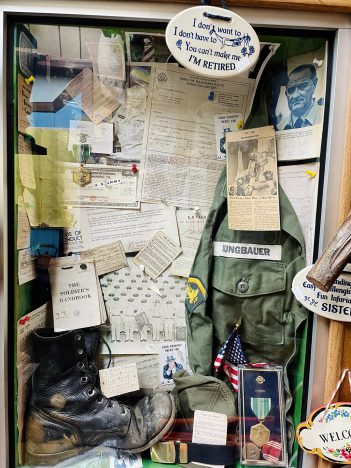 “In those days, you got off the boat and went to the embassy in Frankfort (Germany) and applied to come to America,” said Jungbauer, who was from Karlsruhe, Germany. “It worked really beautiful.”

Jungbauer became an American citizen and after starting his career as a pastry chef in America, he was drafted in the U.S. Army in 1966. He attended basic training in Fort Lewis, Wash., and then attended finance school at Fort Benjamin Harrison in Lawrence when it was still a commissioned military base.

“Finance school didn’t work out because I didn’t speak enough English, so I told them I’d like to work in the kitchen,” Jungbauer said.

That request led Jungbauer down an incredible journey. He baked cakes and pastries for government dignitaries such as presidential candidate Robert Kennedy, various governors, mayors and politicians. On a wall in Heidelberg Haus, Jungbauer displays letters he received from former Presidents Richard Nixon and Lyndon B. Johnson and other well-known people, as well as countless awards, newspaper articles, old photos of him and other memorabilia.

Despite the café’s success, Jungbauer said he never has and never will expand the bakery. He even refuses to have a booth at the Christkindlmarkt in Carmel, although he said the organization is fantastic.

“I won’t go anywhere. I have no interest in getting bigger,” he said. “We like to be small. We bake in the morning, and in the evening we go home. I could’ve opened five stores, but we’re happy and content. We pay our bills, we pay our taxes, and we make people happy, and that’s what I want. I lived the American dream. I came with $30 in my pocket.

“They let me into this country, and I provided work and employment for hundreds of people. Our store is so unique.”

Despite not participating in the Christkindlmarkt, Christkindlmarkt CEO and Market Master Maria Murphy said Jungbauer has made an incredible impact on connecting German and American cultures.

“When I first got this job in 2017, he was one of the first calls and visits that I made because I wanted to be sure that our Christkindlmarkt would be authentic and represent the German culture well,” Murphy said. “He’s one of the best resources you can find. I tried to recruit him to sell cookies, and he said, ‘No, I’m not wanting to expand.’ But he was very supportive and energetic about the idea (of a Christkindlmarkt). He has always been a good partner of ours.” 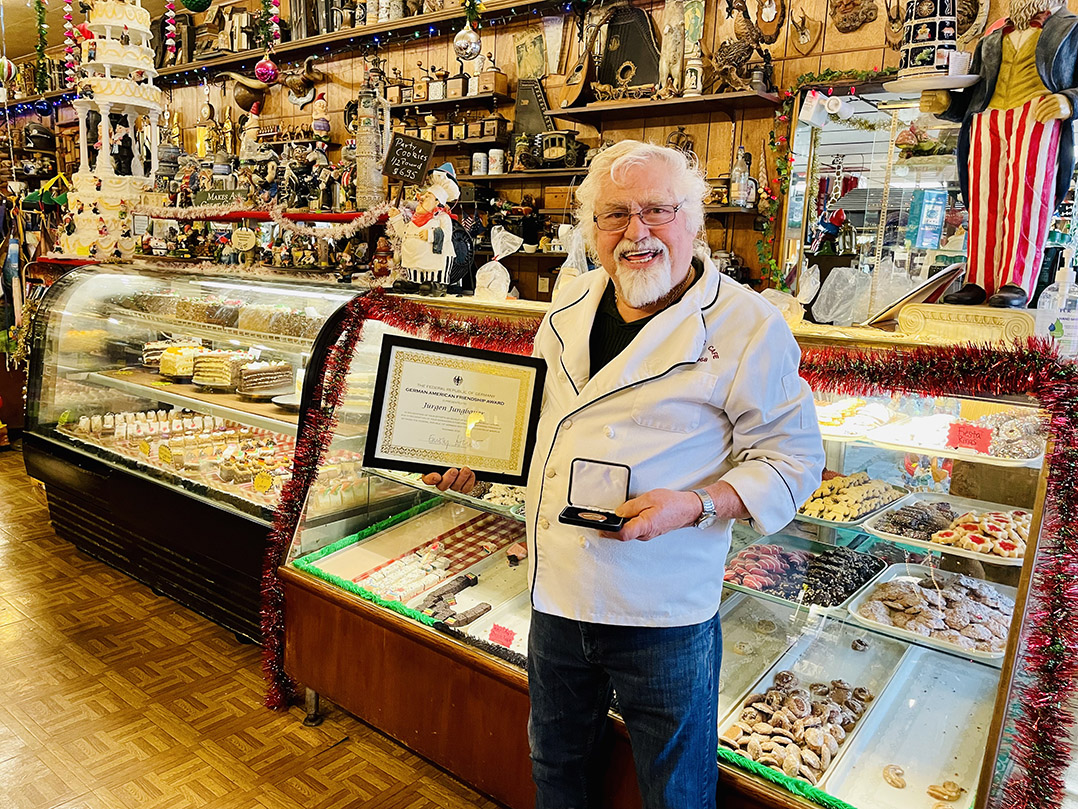 Juergen Jungbauer pauses with his award in the café. (Photo by Anna Skinner)

Heidelberg Haus has kept its same menu since 1969. The store opened in 1968. The lunch menu features authentic German cuisine, such as bratwurst, smoked frankfurters, Weisswurst and many other options. All menu items are below $10. Bakery items include Springerle cookies, Pfeffernuss cookies, and wedding cakes, Bavarian pretzels and other products.