You are at:Home»Current in Westfield»Westfield Community»Athlete of the Week: Dad’s decision proved right for Westfield softball player

Westfield High School senior Avery Parker was a bit forced to trade in her pompoms.

“I was cheerleader until I was 10,” Parker said. “My dad picked me up from a tumbling class and handed me a mitt and said I was going to play softball.”

It proved to be the right decision as Parker is headed to play softball for Indiana University on scholarship. 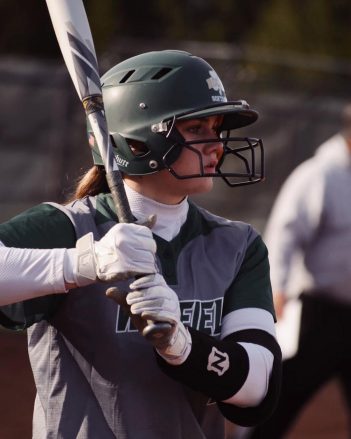 Parker had two major goals, one personal and one team, entering the season. She has already smashed her personal goal of breaking the school’s all-time home run record of 25. She has nine already to give her 28 in her career.

Now, she just has get her team goal of breaking the school’s single-season  record for wins, which is 16. As of April 25, the Shamrocks were 9-4 and 2-1 in the Hoosier Crossroads Conference.

“All around as a team we’ve been doing better than we have in past years,” she said. “My input helps build the team up. If they see I can do it, they can do it.”

Parker is a catcher and infielder.

“I play wherever they need me,” said Parker, who also hopes to play in the North-South All-Star game.

Parker said she was recruited by IU as a catcher and to play at the corners in the infield.

“I love catching, but honestly, I like playing everywhere,” she said.

The 5-foot-9 Parker said her biggest improvement has been an increase in power.

“In travel softball, we play some Power 5 Division I commits, so they throw some heat,” she said.

Parker said she has always wanted to play in the Big Ten and IU seemed like a great fit.

“I know (IU’s coaches) are going to develop me in the best way,” said Parker, who plans to major in psychology and wants to become a forensic psychologist.

Her brother, Aidan Parker, is a 2020 WHS graduate and an offensive lineman for Youngstown State University’s football team.