You are at:Home»Night & Day»Entertainment News»TV crews will be at home for Mecum Auctions broadcasts at State Fairgrounds

Providing broadcast coverage for Mecum Auctions is a year-round job for Ben Christoffel.

The Westfield resident, who serves as the executive producer for Mecum telecasts, is one of three full-time Mecum employees on the TV broadcast. The others are Heather Jaynes, Whitestown, production manager, and Scott Hoke, Avon, host.

“At any given auction we have a crew of 45 to 50 television production professionals producing anywhere from 12 hours to 24 hours of auction coverage per weekend on MotorTrend TV and MotorTrend+.,” Christoffel said. “We currently have a total of 12 auctions televised in 2022 with nearly 200 hours of total live coverage. We also produce dozens of hours of shoulder programming and features on specific cars or collections throughout the year. “

Mecum Auctions entered into a multi-year agreement this year with MotorTrend to broadcast on MotorTrend TV, the cable network and MotorTrend+, the streaming service. Mecum had been on NBC Sports Network for eight years, but NBC decided to dissolve the network.

Christoffel and many members of the production team won’t have to travel far for Dana Mecum’s 35th Original Spring Classic collector-care auction, which is set for May 13-21 at the Indiana State Fairgrounds in Indianapolis. The broadcast feature the catalog cars starts May 18. The broadcast time is noon to 6 p.m. each day.

“They try to stack the deck during those days,” Christoffel said of the premier cars.

After graduating from Ball State University, Christoffel become involved with live remote productions and began working with Mecum in 2010. Christoffel was hired by Mecum in 2014 to run the television division. John Sifferlen serves as producer on a freelance basis.

Christoffel said another part of his job is to film dozens of videos each year featuring collectors or special cars coming to the auctions.

“It pulls back the curtain on why they collected what they did and what kind of shape their cars are in, what kind of value a buyer might get if they purchase from that collection,” Christoffel said. “I travel twice a month to get to collectors. We’re an auction company, but we’re also a marketing machine. You can’t sell cars without letting them know they’re available.”

One of Christoffel’s favorite shoots was a segment on the collection of Carmel residents Jackie and Gary Runyon.

“The nicest most down-to-earth couple you’ll ever meet,” Christoffel said. “They are passionate about their cars and are longtime customers of Mecum.” 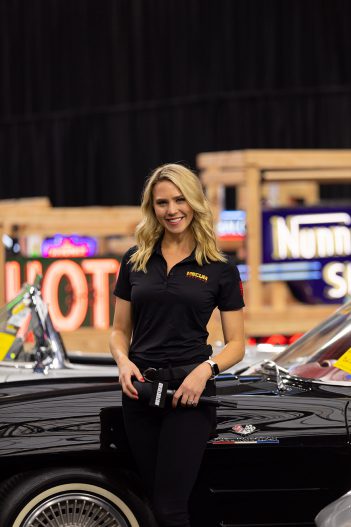 Christoffel said his favorite car is a 1965 Chevrolet Corvette, which was his father’s first car.

Katie Osborne, who grew up in Carmel, has been one of the sideline reporters since 2016.

“What a fun journey and ride it has been with the Mecum Auctions TV production crew and the Mecum staffers who work each and every event,” she said. “(It’s) a hardworking team, for sure.”

“Ones that are ‘story-driven’ instead of those that just offer goods under the hood,” she said. “That being said, I’ve always been a Bronco woman. A green 1970 would be ideal, but almost any color would do just fine as long as it’s an early  ’70s Bronco. My first car crush was a Chevy Bel Air. I think that was because I loved the cartoon TV show ‘The Jetsons,’ and their space car in that show for some reason reminds me of a Bel Air. Additionally, I would love a big land yacht like a ’60s Cadillac Eldorado convertible. I grew up with Cadillacs in my family, so I have always enjoyed the look/feel/vibe of those. Lastly, I have had my eyes on an  ’80s Jeep Grand Wagoneer, just super cool looking.”

The best part for Osborne is sharing the emotional connection between owners and their vehicles.

“Additionally, connecting with the Mecum community in person at the events, on the television show and on social media have been a priority as well,” she said.