Michael Taylor has been connected with Red Barn Summer Theatre, but this is something new.

The season opener of “Deceiving Granny” marks the first time one of Taylor’s four plays has been presented at the Red Barn in Frankfort. The show has eight performances from June 8 to 19. 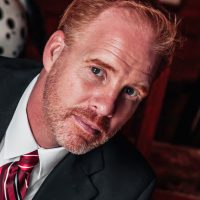 Taylor has been with Red Barn for 26 years, including the past seven as artistic director,

“It’s very slapstick, very much a farce,” Taylor said of his play. “It’s very over-the-top physical comedy, the slamming-door farce, one person leaves and another enters.”

The play is about a married couple trying to inherit a fortune from a grandmother they have never met.

“Deceiving Granny” made its debut at Frankfort High School, where Taylor teaches theater, 10 years ago.

“I try to do things at the high school that you wouldn’t necessarily call a high school show,” said Taylor, who directs the show. “The problem is you can’t cut or edit anything. Most authors don’t want you to, so I thought I would write something that had my students’ sense of humor but still doesn’t feel like a middle school show. I then decided to submit it and it was published.

“Since then, this show has been played in several countries and all over the U.S.”

The cast has 11 members.

Taylor said an actor, Jan McGill, saw the play at the high school and asked why Taylor why it hadn’t bee presented at Red Barn.

“She said the high school audience and Barn audience are very different, so a lot of people didn’t get to see it,” Taylor said.

Taylor said McGill said wanted to see the play with actors portraying characters their own age.

“I was hesitant because I don’t want anyone to think, as artistic director, I showcase myself in any way,” he said. “Since it was her recommendation and other people thought it would be a good idea, I went with it.”

McGill has a part in Red Barn’s second show, “Murdered by Death.”