You are at:Home»Current in Carmel»Carmel Business Local»Sisters to open alcohol-free beverage store in Carmel

Sisters Andrea Marley and Kristin Patrick have always wanted to have their own store. They saw an opportunity to do that after they both stopped drinking alcohol in the last year.

Patrick said they saw an article in Vogue about booze-free bottle shops, and they decided to bring one to Carmel.

“We saw there were stores dedicated to this burgeoning (offering of) alcohol-free products,” Patrick said. “We’re trying to replicate the success of other stories in the country. The whole idea is the store has just non-alcoholic alternatives, alcohol-free wine, beer and spirits.” 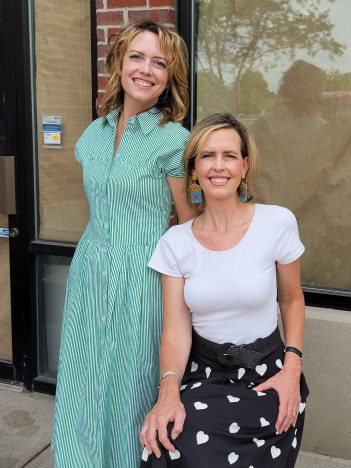 Patrick said the stars were aligning for the right opportunity. The sisters, who are Carmel High School graduates, will open Loren’s AF Beverages, 5790 E. Main St., Suite 150, in mid-August. Loren’s AF Beverages, which will be open Wednesdays through Sundays, will be the first alcohol-free bottle shop in Indiana. The name is a tribute to their father, Loren Marley, who died March 15.

“That’s where we got the confidence to do this,” Patrick said of their dad. “He’s always been our biggest cheerleader and believed in us. He wanted us to try new things and have new experiences. He was a great businessman himself.”

Patrick said there are not a lot of alcohol-free products in Indiana.

“That’s been part of our market research, going to different grocery stores and box stores and seeing what’s available.” Patrick said. “The answer is not much. The alcohol-free bottle shops are thriving.”

Marley said she has been frustrated with not finding enough choices for non-drinkers while attending social outings or networking events.

“We’ve been experimenting with some mocktails and using non-alcoholic whiskey or making a non-alcoholic amaretto sour,” Marley said. “It’s an amazing ritualistic experience that I absolutely love. It feels like I’m included, and it’s not just here is some orange juice and some cherry juice, and this is what you are going to have. What’s so exciting (is) there are so many people who maybe want to have a dry weekend or maybe they are on medication or have family trouble or maybe they are in recovery or you can be a drinker and shop here. If you are not drinking like us, there are just a million new options.”

“There are also a lot of religions who stay away from alcohol entirely,” Marley said.

Marley said she has had more energy since she stopped drinking in the summer of 2021.

Patrick, who stopped drinking approximately six months ago, said she considers herself a mindful drinker now and is open to drinking alcohol in the future.

Patrick said many people have decided to go alcohol-free in the last year.

“There have been a lot of news stories about people reevaluating their relationship with alcohol,” Patrick said. “During the pandemic, alcohol use soared.”

Carmel may ban sale of cats, dogs at pet stores