You are at:Home»Current in Westfield»Westfield Cover Stories»A new home: Westfield Fire Dept. to move into new headquarters in 2023

The Westfield Fire Dept. will soon have a new home.

WFD broke ground on its new headquarters June 1 at the southeast corner of 171st street and Ditch Road.

The headquarters, also known as Station 81, will feature eight bays, a new training tower, physical fitness facilities, living quarters, fleet services and administrative offices. The headquarters is expected to be complete in 2023. WFD is currently housed in the city’s public safety building alongside the Westfield Police Dept. at 17535 Dartown Rd.

WFD Chief Rob Gaylor said the department looked into health and safety when designing the new station. Amenities at the new headquarters include private sleeping areas and cancer prevention initiatives.

“In the old headquarters building now, we have an open bunk room. So, with the pandemic and other infectious disease, what we learned is we really need to accommodate a private sleeping area for individuals,” Gaylor said.

Private sleeping areas also benefit sleep. With a new firehouse alerting system, firefighters will only hear an alarm when it is a call they’re involved with.

“As a firefighter, I would go into my bunk, select what apparatus I’m on so I don’t get disturbed during other apparatus calls,” Gaylor said. “Part of the biggest risks with firefighters outside of cancer is cardiovascular disease. We learned through studies that sleep deprivation and the added stress of bells and lights and how those things sound and how bright it gets puts a lot of stress on our heart.”

An air lock will separate the apparatus bay from the living corridors. Exhaust hoses will plug directly into the apparatus in the bay, so exhaust is pulled through a filter and sent outside the building instead of in the bays where firefighters might breathe in carcinogens.

“We are building in those isolation barriers to separate as much as we can and reduce the exposure factor with the carcinogens and other diseases that could get passed around by having a more open concept,” Gaylor said.

The new headquarters also will afford more training opportunities. The building will feature a tower, similar to a clock tower. Gaylor said the tower provides added space to store hoses and also provides an environment for firefighters to practice elevator shaft maneuvers or rope rescue operations.

RQAW is designing the project, and the Hagerman Group is constructing it.

When the fire department vacates the public safety building, the WPD will further expand into the space.

“Once Westfield Fire has vacated their half of the existing public safety building, we will evaluate how that space can be utilized for an interim period,” WPD Chief Joel Rush said. 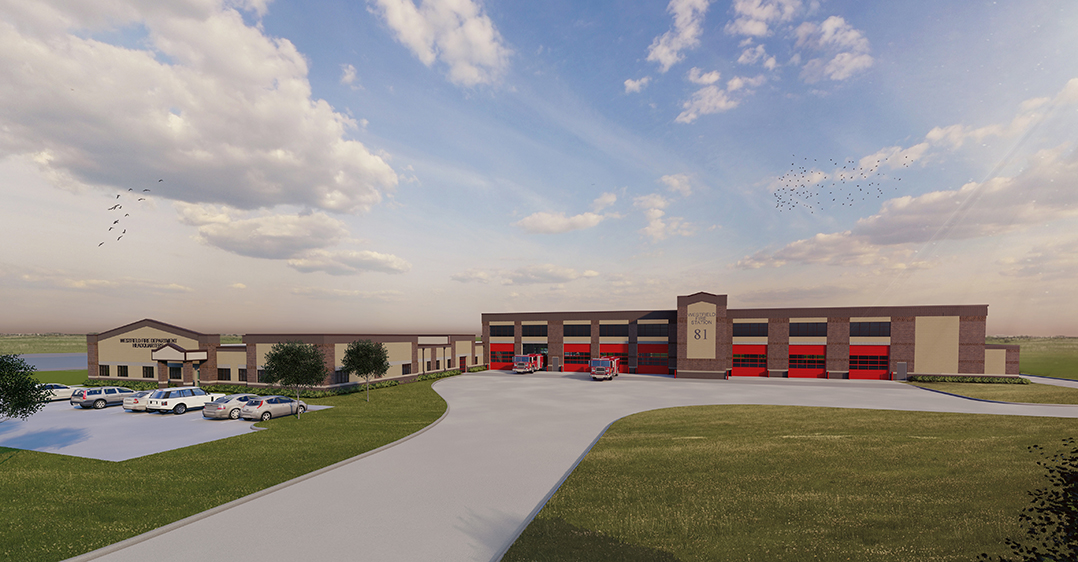 A rendering of the new Westfield Fire Dept. headquarters. (Rendering courtesy of The Hagerman Group)

Westfield Fire Dept. has three stations – one at 1920 E. 151st St., one at 17944 Grassy Branch Rd. and one at the Westfield Public Safety building, 17535 Dartown Rd., which will move into a new headquarters in 2023. WFD Chief Rob Gaylor said a fourth station is already being discussed.

“We are looking in the area of Grand Park west of (U.S.) 31 and east of Tomlinson (Road) or Wheeler Road by Chad Hittle Drive,” Gaylor said. “The city owns some property up there.”

Gaylor said the area is a good location because fire apparatuses would have easy access to 191st Street for east or west travel and U.S. 31 for south or north travel.