You are at:Home»Current in Zionsville»Zionsville Cover Stories»More than a store: Robert Goodman Jewelers utilizes its space for unity and equity

The Zionsville sky might have appeared gloomy on the evening of July 8, the atmosphere inside Robert Goodman Jewelers, 106 N Main St., was lively. A diverse group of individuals packed the store to view art celebrating social justice, unity, diversity and inclusion.

Inside the shop, owner Bob Goodman greeted everyone with a smile. Nestled against the store outside was a rainbow flag showing support for LGBTQ+ community members and a couple of signs that read “Black Lives Matter” and “Hate Has No Home Here.” A sticker on one of the shop’s windows announced to customers that they were entering a gun-free space. Goodman also recently shaved his head to celebrate the store raising $1,000 for Memories on Main, a fundraiser for the Alzheimer’s Association.

Goodman pledged to shave his head inside the store during business hours if Memories on Main raised $1,000. Local offered special drawings and sales for the fundraiser.

Although some business owners might worry that taking liberal stances in a conservative state could be bad for business, it has never been a major concern for Goodman and his wife, Rose-Marie, who opened their store in 2000. They believe a store can and should reflect the values, morals and views of its owners.

“He’s been obsessed with right and wrong since as long as I can remember,” said Ian Goodman, Bob’s son. “I think he grew in confidence after he started this business and he found himself in a way that he hadn’t quite realized prior to (opening the store).”

Ian Goodman said that when his parents made the decision to be outspoken as a part of their business model, he was one of the individuals who said they could lose business and customers as a result of their views. They told him that was a consequence they were willing to live with. 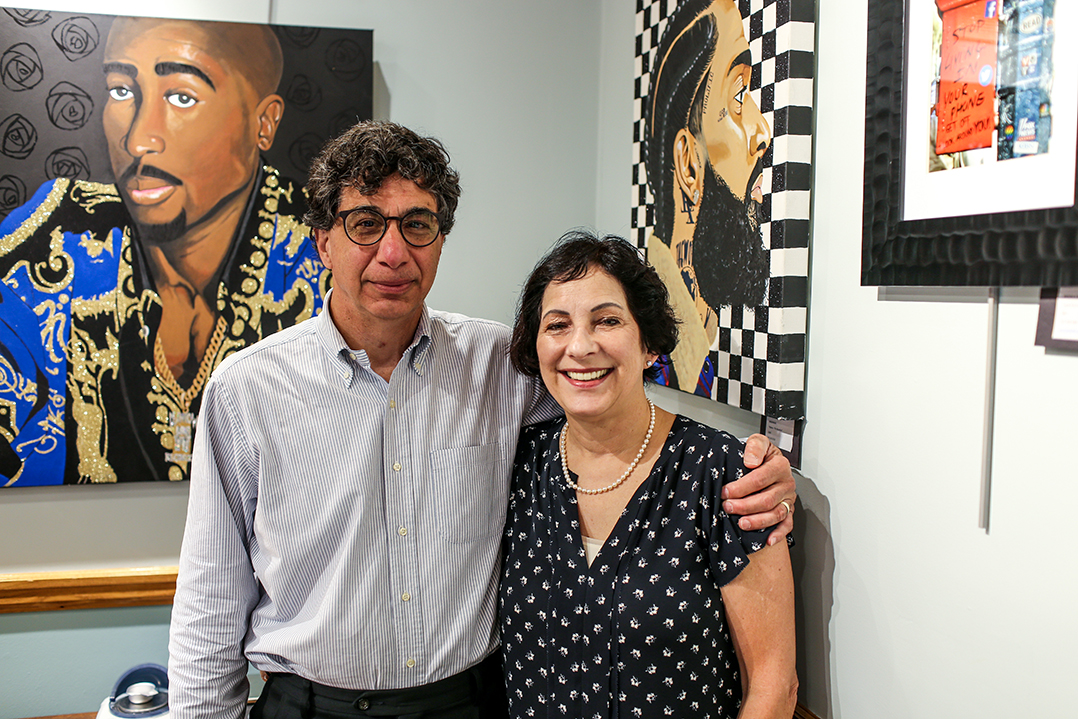 Bob and Rose-Marie Goodman pause in their Zionsville shop, which is displaying an exhibit throughout celebrating social justice, unity, diversity and inclusion. (Photo by Ann Marie Shambaugh)

Bob and Rose-Marie hold events at the store like the July 8 art exhibit – the same morning shaved his head to celebrate raising $1,000 for the Alzheimer’s Association. During Ramadan, the store held an iftar – or breaking of fast – for people who practice Islam.

Rose-Marie said she loves the fact that the store can host events that are not always related to jewelry. She said it’s something most people wouldn’t expect from a local jewelry store.

Something else people might not expect to see in the store is a picture of  Republican U,S. Rep. Liz Cheney, a frequent critic of former President Donald Trump. Like so much else inside their space, it represents a belief that the couple firmly holds to.

“You can still be very liberal and or very conservative, but that doesn’t mean you can’t talk to one another and understand,” Bob said. “Good governing (and) good legislation comes from compromise.”

Goodman said he welcomes customers who don’t always agree with his position on social and political issues. He said some people have told him they won’t shop at his store because of his  position on gun control. Rose-Marie said they have probably both gained and lost customers as a result of their stance on the issue.

“It’s their choice if they choose not to come into the store,” Bob said. “We respect that and we understand it.”

Robert Goodman Jewelers was part of a recent controversy in which Zionsville Mayor Emily Styron used profane words on the store’s Facebook page in response to a comment from a Westfield man on a post about the store’s support of candidates in favor of stricter gun laws.

On May 26, in response to recent mass shootings in Buffalo, N.Y., and Uvalde, Texas, Robert Goodman Jewelers posted about the need for businesses to “put aside profit” and “support candidates who support change.”

Later that day, Joel Bardach of Westfield commented on the post, stating that mass shootings are “a mental illness problem,” that you “can’t get rid of the guns,” that violence in Chicago and New York “prove gun laws alone don’t work” and that there is “no easy answer from anyone.”

The following day at 2:22 p.m., Styron posted an expletive-laced reply to Bardach from her personal Facebook account.