You are at:Home»Night & Day»Entertainment News»Blues singer Robinson to perform in Live at the Center series 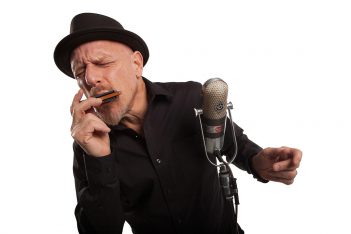 Tad Robinson will perform Aug. 31 in the Live at the Center series at the Palladium. (Photo courtesy of Rich Voorhees)

Tad Robinson’s first appearance at the Palladium was a memorable one.

The soul-blues singer played a small harmonica part in a large ensemble production headed by Michael Feinstein, the Center for the Performing Arts’ artistic director.

“That was a cool evening because in addition to meeting Michael, I had the opportunity to meet Dionne Warwick up close, amazing.”

Now, Robinson and his band have the opportunity to perform in the Live at the Center series at 7:30 p.m. Aug. 31 at the Palladium at the Center for the Performing Arts in Carmel.

“I consider it a very nice honor to be asked to play there,” Robinson said. “I’m very grateful to the incredible creative production team at the Palladium. Sweet gig. I’m looking forward to it.”

Robinson said he has been asked to only play original songs in the performance.

“We’ll draw from well of several of my albums that have been released through the years on Severn Records, my current label, and some tunes from my time when I recorded for Delmark Records.”

Robinson said the band will perform a few songs from “Real Street,” his most recent album.

“But we’re all like family,” Robinson said. “I’m very blessed to have the level of talent that these guys bring. Each one of these guys is a musical treasure and an artist of great depth.”

Earlier this month, Robinson performed gigs in Scandinavia and Eastern Europe at blues festivals and nightclubs. Earlier this summer, Robinson toured Italy. Later this year, he will return to Europe for another tour, visiting Germany, Belgium, Holland and Norway.

“Most of the year, Indy folks can find us gigging in our haunts around town — no place like home,” Robinson said. “As always, we hope to see some old friends and make some new ones at our show at Live at the Center.”

Tickets are $5 for in-person. To register for a free livestream, visit at thecenterpresents.org. For more on Robinson, visit tadrobinson.com.