You are at:Home»Current in Geist»Geist Cover Stories»Spreading the (written) word: Little Free Libraries provide easy access to books for kids

Little Free Libraries are tiny boxes filled with books scattered throughout communities that work on the premise of “take a book, leave a book” and are monitored and maintained by people who are called stewards.

That’s why McCordsville resident Bill Reed decided to put a Little Free Library in his front yard. The library at 13020 Highland Springs Ct. in McCordsville near Geist Reservoir.

“There is no better way to get your child an advantage in school than to read to them,” Reed said. “There’ll be times I’ll be looking out the window and I’ll see kids right up on bicycles and it’s just a good feeling to see these kids grabbing books to go read. And so even though I’m a retired math teacher, it still is all about getting an edge for education.

“Better readers can just do so much more in life, and it’s just a community service to help everybody.”

Reed, who is in his 60s, said he has seen libraries have a hard time accessing funding. That is why he thinks Little Free Libraries are important.

“For kids, they can’t drive to get to those (public) libraries, so having these opportunities in their neighborhood gives them access to things that they may not have otherwise,” Reed said. “They’re hidden gyms that are a wonderful resource and a service to the community.”

“As a parent, it was a fun thing when my kids would spot one and we could stop and look through libraries and they were always very good at remembering that they took one and that we needed to get one from our house to return back to the one that we took,” Sellers said. “It was just a good learning lesson for kids to know to give and take and share and have a community feel with our neighbors and friends.”

Katy Mann, founder of Indywithkids.com, a blog about things to do with your kids in Indianapolis, said that her own children, who are 6, 7, 10 and 12, have utilized the Little Free Libraries throughout their childhood.

“Anytime we’re in a park that has one, it’s very exciting because some of my kids don’t like to play on the playground anymore, and so they’ll go grab a book from the Little Free Library and go curl up in the shade and read a book,” Mann said.

Although some Little Free Libraries cater to children, most have books for adults as well — also based on the concept of sharing books, something that Mann remembers used to be a more common practice.

“I think it’s replacing something that used to happen with friends sharing their reading material with each other,” Mann said. “You know, instead of that book just sitting on a shelf and no one enjoying it, now it’s being passed around from library to library and person to person and actually being used by people.” 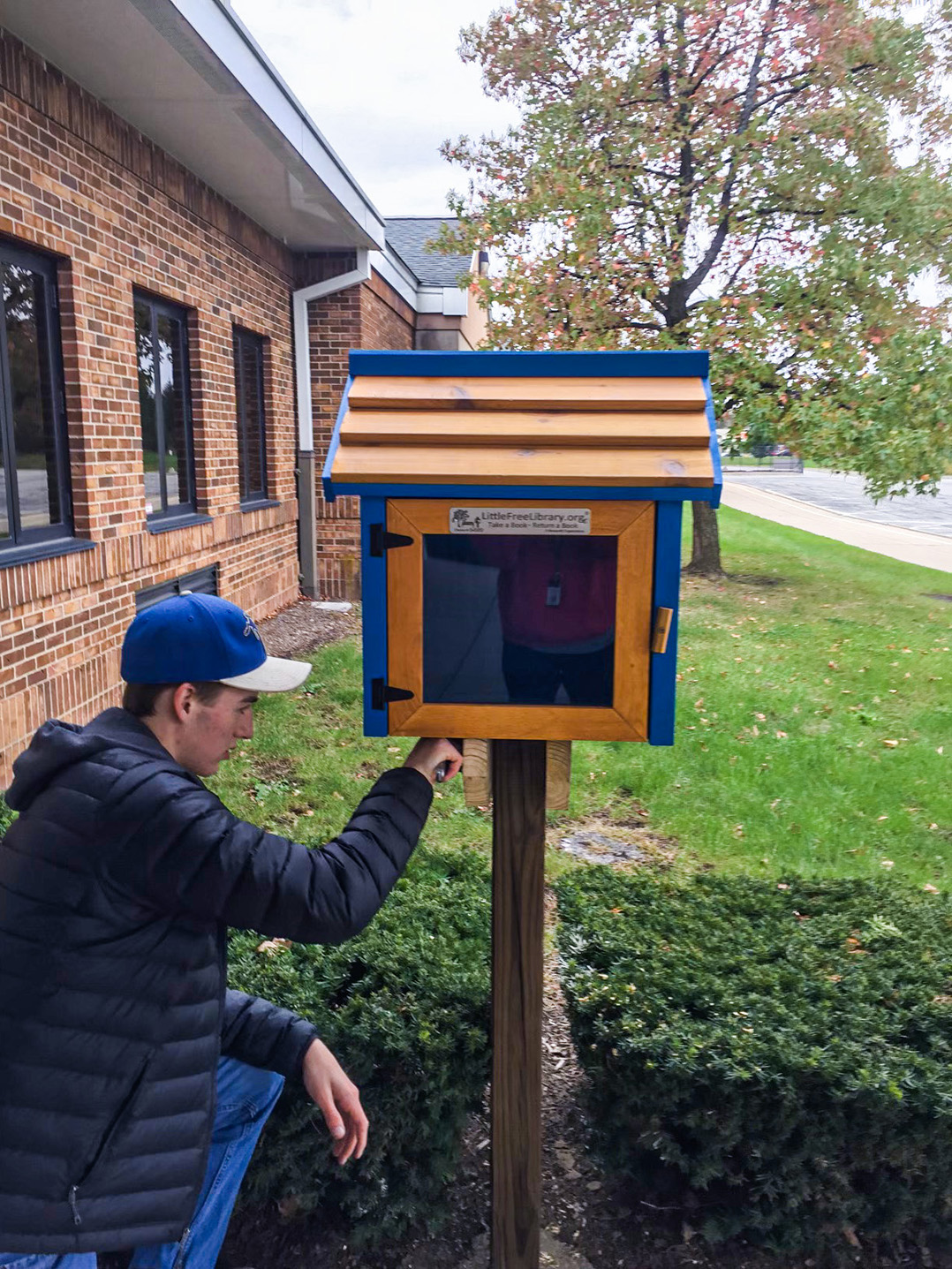 The Little Free Library outside Amy Beverland Elementary School was built by Ethan Sellers in 2016, the son of Laurie Sellers, a teacher at the school. Sellers said she often sees kids ride their bikes to the library after school. (Photo courtesy of Laurie Sellers)

Other locations can be found at littlefreelibrary.org/map/.