Indiana University Health speech pathologist Julia Porter’s own journey as a cancer survivor has made her passionate about helping others detect head and neck cancer.

Porter, 30, was diagnosed with adenoid cystic carcinoma, a rare cancer that most commonly arises in salivary glands of the head and neck, after having surgery to remove a mass in her nose. She finished cancer treatments in October 2017. Porter, who doesn’t smoke, said there are about 1,200 cases of adenoid cystic carcinoma a year.

Porter said her diagnosis highlights the importance of early investigation, such as free head and neck cancer screenings from 1 to 4 p.m. Aug. 26 at the IU Health Schwarz Cancer Center, 11645 Illinois St., Carmel. Porter is volunteering at the screening.

“If you notice something is wrong or a lump, or a pain or something doesn’t seem right, it’s important to get that checked out as soon as possible,” she said.

Porter’s symptoms were a stuffy nose. She thought it might be allergies, even though she didn’t previously have any.

“I was snoring, which was weird,” she said. “I eventually got to the point where I couldn’t even blow my nose. A co-worker put a camera in my nose, and that’s when she saw the mass. Even then it didn’t look like cancer. I was lucky enough to have the equipment at my work to look at it. If I didn’t work in this profession, who knows how long I could have let it go. Even after she saw the mass, I still drug my feet in terms of calling an (ear, nose, throat doctor). It was probably six months before I saw someone. Never in a million years did I think it was cancer.” 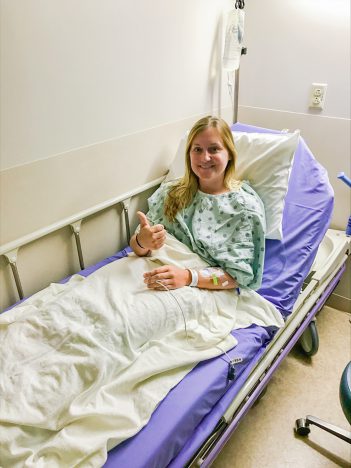 Julia Porter is treated for adenoid cystic carcinoma, a rare cancer that most commonly arises in salivary glands of the head and neck. (Photo courtesy of Julia Porter)

Porter, who lives in downtown Indianapolis and works at IU Health Carmel, said she shares her story with patients if they want to hear about it.

“I try to answer their questions both professionally and personally the best that I can,” she said.

After going through multiple surgeries and chemotherapy and radiation, Porter said her experience sparked her passion working with those with head and neck cancer.

Along with being a speech language pathologist, she serves as the team lead of the oncology rehab program.

“My clinical role is working with patients who have been diagnosed with head and neck cancer, whether the treatment for that is surgery or chemo and radiation or both,” Porter said. “Our intervention is typically proactive in nature. We try to optimize long-term outcomes and address issues before they come up or in anticipation of future issues, eating and drinking related to the cancer treatment.”

Although it wasn’t the cause of her cancer, Porter said some younger people who don’t have a history of smoking and drinking are now being diagnosed more with head and neck cancer.

Porter said HPV (human papillomavirus), a sexually transmitted disease, is outpacing smoking and drinking as the cause.

“For men, you can be exposed to the virus as a young person and not even know you have it,” she said. “That virus can actually lay dormant for decades in tissue in the mouth and throat. These screeners are the best we have.”

Men are twice as likely as women to develop throat cancer. Signs may include a neck mass, persistent sore throat and difficulty swallowing.

There are several other types of head and neck cancer, tongue cancers, laryngeal cancers and tonsil cancers.

Appointments are not required for the head and neck cancer screeners, but space is limited. For more, call 317-962-3659.